Tickets are free with reservations required. RSVP at https://www.eventbrite.com/e/racial-facial-tickets-25828950085, and visit www.sfbff.org for updates. Click on Special Events.

The Unity Group is an evolving group of Black and Jewish community leaders answering the call of Rabbi Beth Singer and Rabbi Jonathan Singer of Congregation Emanu-El, Malcolm Gissen and Ronald Thompson to come together and explore ways to address racism in the City of San Francisco.

“American Needs a Racial Facial” is a short, eight-minute film about race in America. It provides a blur of fascinating images and video – historical and contemporary – depicting both the division and blending that has characterized the history and treatment of people of color in this country.

The film will also screen on Sunday from 2 to 4 p.m. without a panel discussion at the African American Arts and Culture Complex. Visit www.sfbff.org for details.

“America Needs a Racial Facial,” an eight-minute short film, screens, followed by a four-minute video by International Media TV’s Johnnie Burrell of Acting Police Chief Toney Chaplin sharing a racial profiling incident. The final film, another four-minute short, is on the racial justice work of “Advocates for Justice” in Modesto.

The members of the “Implicit Bias and Racial Profiling” panel are: 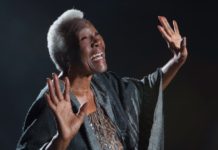