Back in the ‘60s, the founders of the Black nationalist Black Panther Party (BPP), Huey P. Newton and Bobby Seale, told white radicals asking to join the BPP to go found their own party. Thus, the White Panther Party (WPP) was born, or so I’ve been told, as the younger sibling of the BPP. 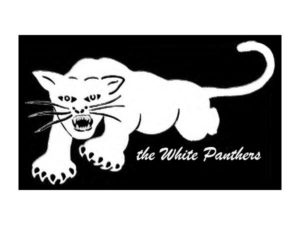 There’s little doubt, the WPP and its seminal band – the MC5 – were responsible for the radicalization of many young, mostly white, people throughout the Detroit metro area. Unfortunately, the WPP was a hierarchal Marxist-Leninist-Maoist (i.e., statist) organization that was unable to entirely shed its hippy roots when it emerged from Trans-Love Energies, due in considerable part to Chairmen John Sinclair’s misguided leadership.

As such, the WPP was generally viewed as a far lesser threat than the BPP to national security by various national and local police organizations in the United States. However, actions taken by members of the WPP, whether alleged or actual, did serve to expose the FBI’s widespread illegal wiretapping of the BPP’s phones.

On Dec. 7, 1969, WPP members John Sinclair, Lawrence Robert “Pun” Plamondon (minister of defense), and John Waterhouse “Jack” Forrest were indicted by a federal grand jury for conspiracy to destroy, and destroying (in the case of Pun), a CIA office in Ann Arbor, Michigan, which had been dynamited on Sept. 29, 1968.

These indictments were primarily based on FBI wiretap surveillance of BPP phones in Berkeley and Oakland, California, on six occasions between February and July 1969, during which Pun was recorded. However, Pun was not the object of the surveillance, according to the government’s sealed exhibit.

Albeit a rarity, the government and its agents weren’t lying because the BPP was, in fact, the target. This was confirmed when the government moved to dismiss the charges, so as not to reveal the wiretapped BPP conversations, after the U.S. Supreme Court upheld District Court Judge Damon J. Keith’s Jan. 26, 1971, order against the government requiring disclosure of the FBI surveillance. United States v. United States District Court for the Eastern District of Michigan et al. (Plemondon at al., Real Parties in Interest). 407 U.S. 297, 92 S.Ct. 2125, 32 L.Ed.2d 752 (1972).

The WPP was generally viewed as a far lesser threat than the BPP to national security by various national and local police organizations in the United States. However, actions taken by members of the WPP, whether alleged or actual, did serve to expose the FBI’s widespread illegal wiretapping of the BPP’s phones.

N.b., This led, in part, to attorney Johnnie Cochran’s discovery of FBI wiretap recordings of Geronimo ji Jaga (Elmer Pratt) in Oakland during the same time as the murders of two white people in Los Angeles for which he had been convicted, which led to the reversal of his conviction and eventual release.

Besides revealing the FBI was engaged in illegal wiretapping of the BPP in direct violation of the Fourth Amendment to the U.S. Constitution, this litigation also led to the creation of the Federal Intelligence Surveillance Act (FISA) courts that exist today to enable the FBI, NSA, CIA, etc. to procure wiretaps in secret. Justice Powell, in writing the majority opinion, joined by all seven other justices (Chief Justice Rehnquist did not participate) outlined the legislation he felt Congress should enact to allow these wiretaps to continue under legal cover. Id., 407 U.S. at 322-24, S.Ct. at 2139-40, L.Ed.2d et 769-70.

Subsequently, on March 29, 1973, a lawsuit was initiated by John, Pun and Jack against Richard Nixon, Richard Kleindienst, Patrick Gray and Attorney General John Mitchell, with three FBI agents later added to the suit when their names were revealed during discovery. Also revealed, via a Freedom of Information Act (FOIA) disclosure in January 1978, was the additional government wiretapping of the WPP from September 1970 to January 1971, including the recording of John’s conversations with his attorneys – a fact concealed from the U.S. Supreme Court until then.

Incredibly, even though the government admitted to the illegal wiretaps, the court granted the government defendants qualified immunity because “the law against illegal wiretaps had not been clearly established” when crimes were committed (emphasis supplied). Sinclair v. Schriber, 916 F.2d 1109 (6th Cir. 1990).

This lawsuit went on for years, first in the U.S. District Court for the District of Columbia, then, after transfer, in the District Court for the Eastern District of Michigan, until finally dropped when the plaintiffs ran out of money after “the fifth interlocutory appeal in 1990” in the words of Hugh “Buck” Davis Jr., an attorney for the plaintiffs. Thus, it bore little fruit, except for John Sinclair’s affidavit, filed with the court, Id., at 1115, which states:

“The chilling effect of FBI wiretaps and other illegal surveillance and interference in my political activities as chairman of the Rainbow People’s [sic] Party was of principal importance in bringing my political activism to an end in 1974. Since that time I have not been willing to subject myself and my family members to the kind of illegal, clandestine and unconstitutional spying activities which are still practiced by the FBI.” [N.b., WPP remnants became the RPP – RG.)

In sum, he was terrified. Just like he was at Southern Michigan State Prison at Jackson, where he served time for giving two joints to a cop. Prisoners there in 1970-72 claim John served all his time in protective custody out of fear of those he claimed to lead. No surprise the feds scared the shit out of him, unlike George Jackson or the more recently murdered Hugo “Yogi” Pinell, who they had to kill.

Los Angeles BPP leader Elmer “Geronimo ji Jaga” Pratt was convicted of the Dec. 18, 1968, murders of two white people in Santa Monica, California, on July 28, 1972, and sentenced to life in prison on Aug. 28, 1972. Geronimo had consistently maintained that he was at a BPP meeting in Oakland, hundreds of miles away, on the night of the murders.

The FBI knew all along that Geronimo was attending a Dec. 18, 1968, BPP meeting, with Bobby Seale, Kathleen Cleaver and other BPP members, in Oakland but allowed him to be convicted anyway, which was to be expected.

What was unexpected to me was after it came out during the legal proceedings against WPP members John Sinclair, Jack Forrest and Robert “Pun” Plamondon that the Oakland BPP headquarters phones were being tapped back then by the FBI, that Geronimo and/or his attorneys did not go directly after those electronic surveillance tapes, or ELSURs in FBI parlance.

Certainly, by the time of the U.S. Supreme Court’s 1972 ruling, the WPP members knew these ELSURs existed. Nonetheless, as far as I can tell, nobody bothered to inform Geronimo of their existence, because the case against Sinclair et al. – being dismissed because the FBI did not want to reveal the tapes of Pun speaking to someone at the BPP’s Oakland headquarters – was never mentioned in any of Geronimo’s FOIA/Privacy Act filings against the FBI. See Pratt v. Webster 508 F.Supp. 751 U.S. D.C. DC 1981); and Pratt v. Webster, 673 F.2d 408 (DCC 1982). And this was in the early ‘80s!