San Francisco – A young man shown on video in a physical confrontation with BART police has been acquitted of four counts of battery on a police officer, San Francisco Public Defender Jeff Adachi announced Thursday, Dec. 16.

Jurors deliberated two days before finding Michael Smith, 22, not guilty Wednesday afternoon of the four counts. Jurors deadlocked 9-3 in favor of acquittal on two additional counts of battery on a police officer and one count of resisting arrest. Prosecutors on Friday are expected to announce whether they will dismiss the remaining charges or retry Smith.

All counts are misdemeanors and Smith faced a year in jail if convicted, said Adachi, who defended Smith at trial.

Cell phone video of Smith’s July 29 arrest at San Francisco’s Embarcadero Station showed BART police officers struggling with Smith on the platform, at one point punching him in the head while he is pinned on his stomach.

Smith and his pregnant girlfriend, who are African American, had been traveling to a doctor’s appointment when a white man on the train reportedly told them they smelled bad and to move away, sparking an argument. The white man then called police and falsely reported that Smith had threatened to rob him, Adachi said, telling dispatch that Smith may have had a gun.

A young man shown on video in a physical confrontation with BART police has been acquitted of four counts of battery on a police officer, San Francisco Public Defender Jeff Adachi announced Thursday, Dec. 16.

When the unarmed couple stepped off the train, they were immediately confronted by officers, who tackled Smith and ordered his girlfriend to the ground.

Jurors watched several videos in which Smith begins to struggle when he sees an officer press a knee into his girlfriend’s back as she lies on her stomach on the platform. Smith can be heard calling out to the officer that his girlfriend is pregnant.

Placing a pregnant woman on her stomach and handcuffing her hands behind her body are violations of BART police protocol, Adachi argued at trial.

Following the verdict, jurors explained that they were troubled that officers never attempted to explain to the couple why they were violently detained.

“Jurors agreed that BART police officers used too much force and jumped to conclusions about Michael. They felt the situation could have been resolved without that level of violence. Michael had no idea why he was being stopped, or why officers had swept his legs out from under him and pinned him to the platform,” Adachi said.

The trial process had been fraught with controversy, with Adachi attempting to have Judge Anne-Christine Massullo removed for bias after she ruled that the defense could not mention Oscar Grant or Black Lives Matter to prospective jurors in the racially-charged case, nor provide evidence of the confrontation on the train.

After Adachi’s request was denied, Massullo remained on the case but appeared visibly angry, at one point telling Adachi on the record that “you filed a meritless challenge against me and it was a big waste of time.”

Adachi said he was relieved Smith was acquitted despite tension on the bench and the absence of a single Black juror.

Even without a Black perspective on the jury, “juror John Mayhew said afterward that the underlying racial dynamics were clear,” the Chronicle reports.

“‘One of the officers had made a comment about how the minute he saw (Smith), he looked angry and he had a furrowed brow,’ Mayhew said. ‘I didn’t see that from the video, and it spoke to a certain amount of bias. This person looked a certain way and you were willing to react a certain way.’

“The jurors struggled with whether Smith resisted arrest, Mayhew said, when he refused to get on the ground after the officers approached him with their guns drawn. Mayhew said several jurors spoke of recent police shootings across the nation and could imagine that Smith was thinking he might be in danger.

“‘From the moment when they said, “Get down, get down,” and he said no, it was only 10 seconds,’ Mayhew said. ‘They didn’t give him time to process what was asked of him, and right now, if you’re African American, this is part of your life, part of your story.’

“Mayhew added, ‘I believe with all my heart that if that call had been about me, a 52-year-old white male, they would not have approached me the way they did, with their guns drawn,’” the Chronicle reports.

Press reports on the July 29 arrest

“Pamela Martinez,” Saleem writes, “who was seated inside a BART train along with her mother when she witnessed the arrest, (said): ‘The whole train, inside and outside, started yelling racial justice. I could hear people say that it wasn’t fair and that they (Michael Smith, 22, and his pregnant partner, Andrea Appleton, 23) didn’t do anything. Suddenly people’s reactions grew even stronger and even more horrified so that’s when I knew that we had to get off and so we did.’

“Martinez has been traumatized by the incident and was visibly shaking as she recalled the fear she felt as she pulled her phone out to record parts of the arrest: ‘I saw the policemen brutally – that’s the only word I can use – brutally attack these kids. The kids looked like teenagers and they weren’t doing anything.’

“Martinez said that she saw Smith flailing his arms and legs while the BART officer had his knee on his back. ‘That’s when you can hear the whole station yell, “Get off his back; you are going to break it.”’

“Law student Tarina Larsen recorded multiple videos during the arrest, including one that shows an officer punching Smith while he was lying on his stomach handcuffed. Right before the punch, the video shows Smith lifting his head up and (he) appears to spit on the officer, who then responds with a punch.

“Larsen witnessed at least one woman trying to give a statement to the officers. ‘I saw this one woman trying to speak to the officers and they just brushed her off. She kept repeating that they hadn’t done anything, these were just kids playing, that it happens all the time. The officers continued to dismiss the women despite her repeated attempt to explain to them that they shouldn’t be making arrests since nothing happened.

“‘The woman was trying to tell the cops that an older white man was calling them names and, when they told him to stop, he had the audacity to call the police. The police then came on the scene and proceeded to violently arrest these two kids without even listening to witness statements. This is what bigotry looks like,’ Larsen said. Larsen recorded multiple videos and has been co-operating with the San Francisco Public Defenders Office who are handling Smith’s case.”

“Tarina Larsen, who said on Facebook that she took the video, said the incident stemmed from a racial slur.

“‘I just watched 4 BART officers arrest 2 Black children at the Embarcadero Station after an old white male antagonized them with racial slurs and then had the audacity to call the cops on them knowing damn well what will happen to those kids next,’ she wrote in a Facebook post. ‘Witnesses are frantically trying to explain this to the cops as two of them are holding the kid down on his stomach and jamming his knee into his back.’

“The other video shows police picking the suspect up from the ground. Bystanders can be heard screaming, ‘Get off of him,’ ‘He wasn’t doing nothing’ and ‘Police brutality.’

“Pamela Martinez, who posted the second video, said an officer drew a weapon during the incident.

“‘Someone yelled, “Get your knee off his back! You’re going to break it!” This hell of a scene took over 10 minutes. 10 minutes of begging and yelling for justice without anything happening,’ she posted online. ‘At one point, everybody suddenly stepped away and we saw that the cop pulled out a gun (WHY?!?!). My legs trembled as I was sure that the cops were gonna open fire on these kids.’”

Neither original video is now available online, but some of Larsen’s footage can be seen in this CBS video:

In a Sept. 16 story, the San Francisco Chronicle reports: “The cell phone footage that circulated on social media was fuzzy and shot at a distance. The officers’ cameras gave a more complete picture of the incident, Bastian said.

“‘We were even able to see the defendant kicking the body camera off the chest of one of the officers,’ he said.

“Adachi, however, said any violence was instigated by police.

Quoting Stanford University Criminal Justice Center Robert Weisberg that Noting that “it would be very, very hard” to defend Smith by arguing he had a reasonable fear of excessive force, the Chronicle notes, “Defense attorneys seldom attempt it in court, he said.”

“Adachi said,” the Sept. 16 Chronicle story continued, “the trial will ‘really focus on how police are trained. After the Oscar Grant case, there was a huge effort to reform BART, yet what we see here is officers working to escalate a situation.’

“Grant, who was also 22, was shot dead by a BART police officer while lying facedown on the Fruitvale Station platform after a fight erupted on a train in the early morning hours of New Year’s Day 2009. Johannes Mehserle, who shot Grant, was sentenced to two years in prison after being convicted of involuntary manslaughter.”

In the 48 Hills story, Sana Saleem reports: “Smith’s paternal aunt, Dr. Jacqueline Smith, broke down when asked if she saw the video of the arrest. ‘I could never watch the video again, but I felt, “Is that my kid? Who could treat another human being like that? Who could put their hands on anybody like that?”‘“

“Michael and Andrea are relieved their nightmare is over. Michael was falsely accused of a crime. That accusation and the excessive force used against him by responding BART officers changed his life and the life of his pregnant partner forever.

“On that day, Michael lost his liberty and his dignity. Andrea would go on to lose her pregnancy. Evidence showed BART police violated their own policy when they used force against a woman they knew to be pregnant and handcuffed her behind her back, which is strictly prohibited. Michael’s pleas to know why they were being violently detained were ignored.

“While their lives will never be the same, the specter of a criminal case is no longer looming against Michael. We would like to express our gratitude to the jurors who acquitted Michael of the majority of the charges against him.” 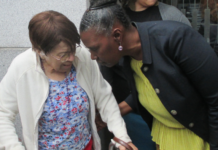 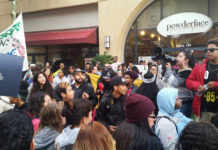