by Shai Alkebu-Lan, director and international spokesperson for The House of the Lions of Judah Ecumenical Rastafari

Soledad – A recent case submitted for review in the United States District Court Central District of California, CV-16-08378-DDP (KK), alleges Board of Prison Hearing (BPH) staff on Dec. 3, 2016, intentionally conspired with the psychs to assassinate the character of Pan African inmates in California prisons.

The case also alleges that the BPH appoints ineffective assistance of counsel to petitioners. These attorneys fail to make scheduled appointments, come unprepared and intoxicated to hearings, and demand petitioners take three-, two- or one-year stipulations – i.e., self-imposed denials, because the BPH is not prepared – then threaten the candidates with 15-, 20- or 25-year denials if they continue with their hearings.

Further, if a parole candidate does opt to have the hearing, the BPH makes the hearing a living nightmare by conducting a police investigation – fact finding mission – to aid the victim with a civil suit or carry out retribution on the parole candidate. What’s worse is they set up the hearing transcripts with false and prejudicial documentation that hinders a parole candidate’s future BPH hearings – i.e., guarantees you are never released. Call it the gift that keeps on giving.

A recent case submitted for review in the United States District Court Central District of California alleges Board of Prison Hearing staff on Dec. 3, 2016, intentionally conspired with the psychs to assassinate the character of Pan African inmates in California prisons.

Dr. Mares at San Quentin State Prison shall be called as a witness on this case, because a parole candidate reported that his hearing “was like a Ku Klux Klan lynching, whereby the parole candidate was the guest of honor.” The parole candidate was so shell-shocked by the good cop-bad cop crime scene investigation, disguised as an initial Board hearing that in actuality was an interrogation, that we are led to believe that this federal complaint on habeas corpus needs a dream team.

That’s what it will take to face off with the white supremacist, domestic terrorist, organized crime and corruption ring that the Board of Prison Hearings, along with the California state courts that back them up, represent. It’s political nepotism.

This all occurred because the parole candidate wanted his hearing to continue on the designated date. He was given a five-year denial, while a white inmate the day before with a far more heinous crime of murder, plus a prison stabbing, was given a date and represented by the same attorney appointed to the parole candidate, who is a Pan African.

The remedies are to document these problems, fight and expose the issues in the courts – win, lose or draw, never give up – and impeach the corrupted Legislature advocating the Board of Prison Hearings, their agents within the BPH and the California courts. Lastly, let’s take this complaint to the United Nations, and when or if that fails, it’s no holds barred.

Send our brother some love and light: Shai Alkebu-Lan, P-02598, BW-115-L, P.O. Box 689, Soledad, CA 93960-0689. Shai Alkebu-Lan is the director and international spokesperson for the House of the Lions of Judah Ecumenical Rastafari and a graduate of the San Francisco State University College of Ethnic Studies, Africana Studies Department and Options Drug and Alcohol Counselors School, where he acquired his CATC-1 and is a certified addiction treatment counselor-intern. Certification comes from the California Association of Alcohol and Drug Educators (CAADE). Shai sends salutations to all our sisters, mothers and daughters on the battlefronts of America, fighting the good and glorious fight. A luta continua – the struggle continues! Your brother, father and son, Shai – dread and alive!

This poem is written by the artist to accompany his art, “To Protect and Serve”:

You speak evil words, like turds excreted
The ways you lied and the ways you cheated …
Heated debate, the hate endures
The physical pain and psychological wars …
Your whores with spite invite the victim
To shock and shame when you contradict ‘em …
Picked ‘em apart, the heart in pieces
Destruction of human potential increases …
Releases a wrath, a path of flames
Resulting from new world order games …
Your claims for power devour the spirit
You target the righteous mind and fear it! …
Hear it, spoken in token advice
Revenge is long and cold as ice …
Twice as hard, the scarred return
Wounded and wicked and ready to burn …
Learning calm. A bomb of no mercy
Explodes on contact with your controversy …
New Jersey to Cali, we rally and plead
For soldiers to battle the powers that be …
Free your mind and find them frightened
I scream in vengeance of the enlightened! 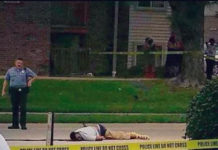 Another dead teenager: Only in solidarity will we ever get back what’s been taken from us