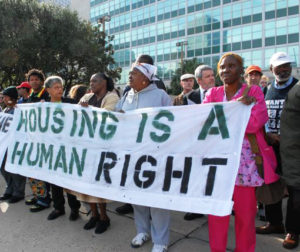 Since the mid 1970s, Democrat and Republican politicians in Washington have prioritized the interests of the real estate industry over the need for affordable low and middle income housing for Americans.

The Nixon administration placed a moratorium on new approvals for the construction of all federally subsidized housing. The Reagan administration slashed the budget of the Department of Housing and Urban Development (HUD). Presidents and members of Congress since then have not restored it.

Housing in the U.S. is mostly a commodity, sold to the highest bidder. Instead of government investments in workforce housing, the commercial market determines who is housed. Can’t afford to make a bid? Can’t afford the rent? Friends’ or relatives’ couches may become your only alternative to sleeping in a shelter or on the street.

Since the early 1980s, shelters have opened throughout the U.S. The National Center on Family Homelessness estimates: “A staggering 2.5 million children are now homeless each year in America. This historic high represents one in every 30 children in the United States.”

Housing in the U.S. is mostly a commodity, sold to the highest bidder.

Homelessness in America is a national disgrace. Cities, counties and state budgets now pick up the massive cost of federal neglect.

I believe that no one in the United States should have to live and die on our streets because they have nowhere to call home. Politicians in Washington, D.C., say they support our troops, yet tens of thousands of veterans are homeless every night. It doesn’t have to be this way.

In 1990, my younger brother and his family paid $10,000 to buy into a housing community in Tempe, Arizona. Concord Village was built in the 1960s as a co-op housing project. The cost to get in at the time was $1,000. A low interest U.S. Housing and Urban Development loan covered the rest. HUD maintains some regulatory control over the property, including requiring that vacant units are made available to lower-income families on a waiting list basis.

When you want to leave the co-op, the money you initially invested is returned. The property remains affordable to low and middle income people.

The market rate to rent a studio apartment in Tempe, Ariz., is more than $800. For three bedrooms, it is almost $1,700. At Concord Village, $405 is the monthly amount my niece pays for a three-bedroom condo.

Concord Village is just one example of a success in government supported housing. For many low and middle income Americans, the dream of owning a home will never materialize. If you are living paycheck to paycheck, owning a share of a housing co-op provides protection from market driven costs for housing and may keep you from becoming homeless.

For some, the commercial real estate market works. For many, it does not. I believe housing is a human right.

Links to info used in preparation for this article:

“A History of Housing Cooperatives” by the National Cooperative Law Center – The National Housing Act of 1974 introduced sweeping changes in federal affordable housing policy. The trend in this era was a shift away from below market interest rate programs (BMIR) and towards Section 8 rent supplements.

“Research on the Economic Impact of Cooperatives” by the University of Wisconsin Center for Cooperatives – A cooperative housing model was developed that encouraged long-term affordability by restricting the appreciation of share value when membership shares are sold. Known as “limited equity cooperatives,” these cooperatives were usually built with some private or public subsidy and required a low initial membership fee.

Barry Hermanson is the San Francisco-based Green Party candidate for U.S. House of Representatives. Visit his website, barry4congress.org, and email him at Barry@Barry4Congress.org.