Al Fraken groped our nuts when we climbed 4 stories to put this up! We took one for team #MeToo #UsToo #NoMeansNo #Nuts #Diddled #ProudBoys #POYB #FeelFunnyInMyPants pic.twitter.com/zqBwHGgSmw

Proud Boys’ official Twitter account, @ProudBoysUSA, reposted this tweet by Unsavory Agents, a pro-Milo Yiannopoulos group from Southern California whose logo suggests an affiliation with the neo-Nazi organization Rise Above Movement. The man on the right can be seen making the “OK” hand gesture, an internet symbol for “white power.”

One of the strangest organizations in the rising “alt-right” movement, the headline-grabbing mix of white supremacism, racism and right-wing populism, has to be Proud Boys.

The group takes on something of a libertarian credo similar to that of their founder, former editor and co-founder of Vice Magazine Gavin McInness, and are all-male “Western chauvinists” who “do not apologize for creating the Western world,” according to their Facebook group pages.

In keeping with libertarian tradition, the group does accept non-white and gay members, as long as they recognize that “white men are not the problem.” 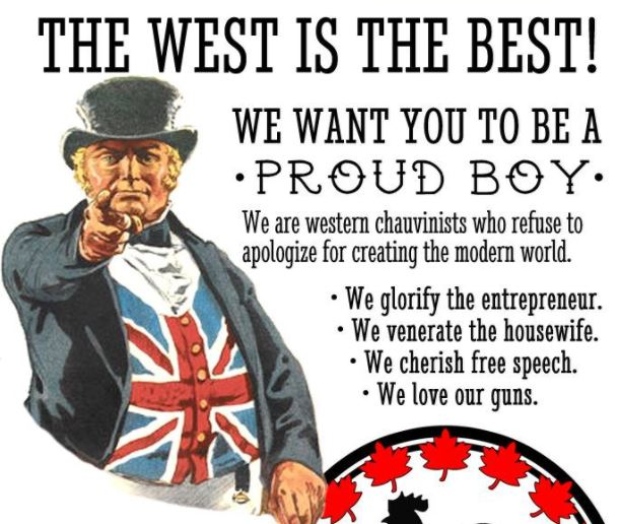 In their early days, Proud Boys, who take their name from a song in the Disney movie “Aladdin,” seemed little more than part fraternity, part fan club for McInness’s YouTube show. But McInness says they’re more than that. He compared his organization to other, older groups.

“It’s a men’s organization, sort of like Odd Fellows,” McInness told Bedford and Bowery, “It mirrors the Knights of Columbus in many ways.”

But both Odd Fellows and the Knights of Columbus are fraternal organizations devoted to charitable works, and the latter has a strong Catholic religious character. To date, there are no documented instances of Proud Boys hosting fundraisers or canned food drives, and the group claims no known religious affiliation.

Perhaps the highest profile instance of public works Proud Boys have engaged in came last September in Houston. In the aftermath of Hurricane Harvey, several members of Proud Boys posed for a photo op, knee-deep in flood water and brandishing firearms. The men said they were there to protect property owners from looters.

Like other fraternal organizations, Proud Boys have “degrees” of membership. The first degree is obtained simply by declaring oneself a Proud Boy. The second involves a “cereal beating,” which involves five other Proud Boys beating the candidate until he can name five breakfast cereals. The third means getting a tattoo of the Proud Boys logo.

Those were the original degrees. Last spring, a fourth was added: getting into a “major conflict related to the cause,” wrote McInness in Proud Boy Magazine.

McInness has been guarded about what this might mean, but a video taken on April 15 surfaced of Proud Boy Levi Romero getting arrested for fighting with anti-fascist black bloc protestors in Berkeley. In the background, someone was heard shouting, “You got your fourth degree.”

The incident occurred during one of the most visible public displays of Proud Boys in action. Members could be seen, wearing the requisite black and gold-striped Fred Perry shirts, street-fighting black bloc counterdemonstrators and cooperating shoulder-to-shoulder with members of the neo-Nazi organizations Identity Evropa and Rise Above Movement.

Identity Evropa is headed by Nathan Damigo, who co-edits the pseudoscientific journal Radix alongside Richard Spencer, arguably the country’s most notable white nationalist. Both RAM and members of Identity Evropa, Damigo included, could be seen wielding torches at the #UniteTheRight demonstrations in Charlottesville, Virginia, last summer.

Proud Boys’ internal contradictions are bemusing. It is difficult to call an organization white supremacist when it includes Black men in its membership rolls. Further, libertarians like McInness tend to favor free markets, something that fascist organizations are sometimes at odds with. They also tend to dislike being labeled alt-right.

But Shane Burley, author of the forthcoming book, “Fascism Today: What It Is and How We End It,” argues that economics is really the only point of disagreement between organizations like Proud Boys and Identity Evropa.

He says that the more openly fascist organizations argue that freer markets can lead to unnatural hierarchies, hierarchies which place people of color on top where whites should be, and that Proud Boys could properly be characterized as “parafascist” as a result.

“Proud Boys are where the alt-right and alt-lite meet,” Burley said.

Like other far-right groups, Proud Boys tend to organize rallies under the mantra of free speech, something else with which Burley takes issue.

Just this week, Proud Boys exercised their own rendition of free speech via their official Twitter page, chiming in with the president by retweeting the posts of far-right British nationalist Jada Fransen. Fransen, deputy leader of the marginal Britain First party, posted videos of dubious authenticity which many critics have labelled Islamophobic.

This is in line with the descriptions on the Facebook page of the Long Beach, California, chapter of Proud Boys, which reads, “All races are =. All cultures are ≠. The West Is The Best.”

This has caused skepticism among experts as to whether Proud Boys are libertarian. Alexander Reid Ross, whose book “Against the Fascist Creep” chronicles fascist movements from the 1890s on, isn’t buying the distinction that groups like Proud Boys would care to make between themselves and the alt-right.

“These guys are really disingenuous to try to draw this sharp line,” Ross said, citing Kyle Chapman’s use of the neo-Nazi trope “white genocide” as a talking point.

Chapman, known in far-right internet circles as Based Stickman, came to prominence after beating several counterdemonstrators with a cudgel at a Proud Boys event in Berkeley on March 4. He would go on to found the military wing of Proud Boys, the Fraternal Order of Alt-Knights, for the express purpose of violently confronting left-wing protestors.

Still, Proud Boys are eager to distinguish themselves from the Richard Spencers of the world.

But he doesn’t think the distinctions are as clear as McInness and others would like people to believe. He says this is part and parcel of the rebranding fascists have been undertaking ever since the end of World War II.

Nevin Long, a San Francisco State University journalism student, is an intern with the Bay View. He can be reached at nevin@sfbayview.com.