Editor’s note: The following article was written on Jan. 18. The next day, the warden had Rashid moved to a freezing cold cell in retaliation. Rashid managed that day to send this message to the Abolitionist Law Center; supporters have not heard from him since. Readers are asked to call the office of Warden Barry Reddish, at 904-368-2500 or fsprison@mail.dc.state.fl.us to ask firmly and politely about the health and wellbeing of Kevin Johnson, No. 158039.

During early January 2018, my article, “Florida Prisoners Are Laying It Down,” was published online, which discussed the prevalence of enforced slave labor in the Florida Department of Corruption (FDOC), the brutally inhumane conditions under which its prisoners live, and a planned nonviolent protest they were staging in efforts to bring attention and redress to these conditions.

Upon discovering my article online,[i] Barry Reddish, the warden of Florida State Prison (FSP), where I am confined, unleashed swift retaliation against me.

On Jan. 10, 2018, Reddish had his lieutenant, Martin Sanders, fabricate a disciplinary report (DR) against me, claiming my article was “inciting a riot” in the prisons – a facially bogus charge as anyone who reads my article can see, since it contains no language directing or encouraging prisoners to do anything and, furthermore, FDOC prisoners have no access to the internet where it was published.

What obviously incensed FDOC officials was my bearing witness to and publishing their abuses and giving a voice to their victims. Which amounts to nothing but constitutionally protected journalism.

Free press and speech at a cost

Which is why the FDOC has made no such accusations against the Miami Herald for publishing similar articles. Take for example the Herald’s Aug. 17, 2017, report on a statewide lockdown of Florida prisons, imposed for several days in anticipation of prisoners protesting inhumane conditions.[ii]

The newspaper even quoted a former warden, Ron McAndrews, denouncing the lockdown as likely to exacerbate tensions because of the intense Florida heat and its prisons having no air conditioning. He made clear that these conditions would be tantamount to torture and invited readers to try it themselves. “You would not be able to sleep,” he warned.

Was the Herald inciting a riot? Of course not.

What I and this paper were engaged in was conveying information about public officials and institutions that it is the public’s fundamental right to know and that we have a fundamental right to communicate. That is what the U.S. Constitution embodies in the rights of free press and speech. As to free press, the Supreme Court has stated: 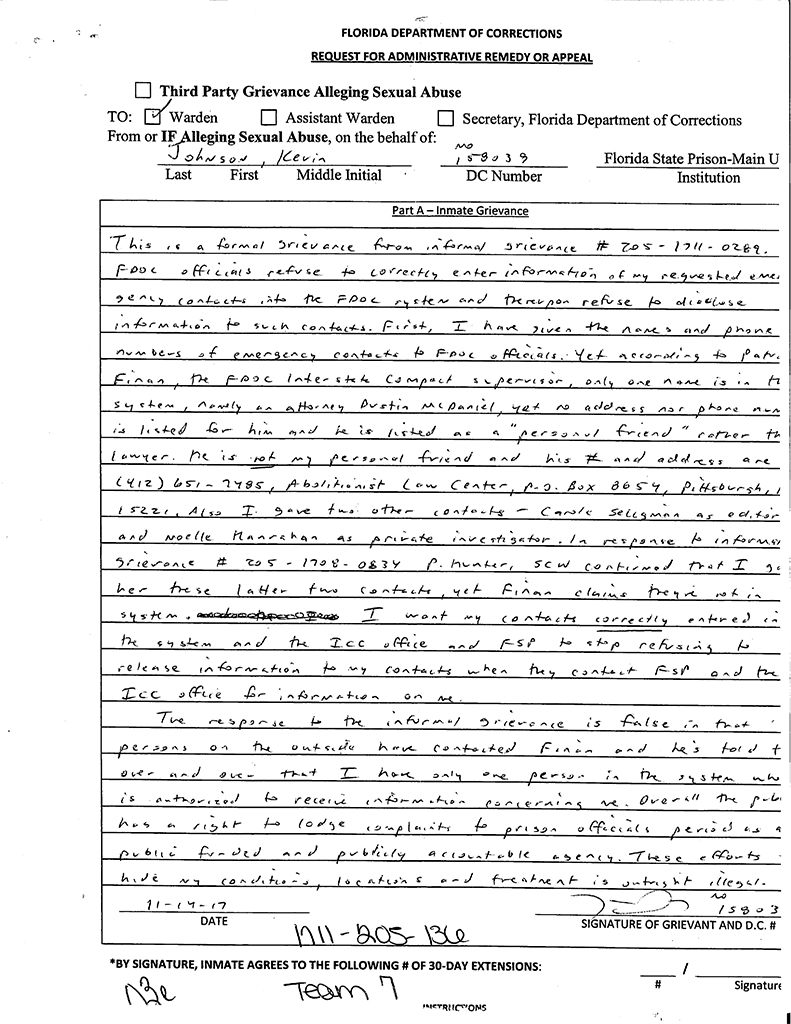 “The Constitutional guarantee of a free press assures the maintenance of our political system and an open society and secures the paramount public interest in a free flow of information to the public concerning public officials. …

“[T]he First and Fourteenth Amendments also protect the right of the public to receive such information and ideas as are published.”[iii]

And as to free speech:

“[T]he right of free speech includes the right to communicate a person’s view to any willing listener.”[iv]

“The First Amendment forbids prison officials from retaliating against prisoners for exercising the right of free speech.”[v]

But as Warden Reddish’s actions demonstrate, the notoriously corrupt FDOC doesn’t recognize nor respect any such rights. Its deeply ingrained culture of corruption, racism and abuse compels secrecy and engenders retaliatory impulses against those who seek to expose it.

In fact, FDOC officials were just caught inciting retaliatory violence and expressing such urges against the Miami Herald for its exposing prison abuses.

This exposure came when posts from a closed Facebook page shared by hundreds of FDOC guards were leaked to the Herald. Incensed because the paper broke a story about an asthmatic prisoner who was sadistically gassed to death by FDOC guards, they posted such remarks as, “I would like to slap everybody associated with the Miami Herald in the mouth.” Followed by their posting a map with directions to the Herald’s office.[vi] 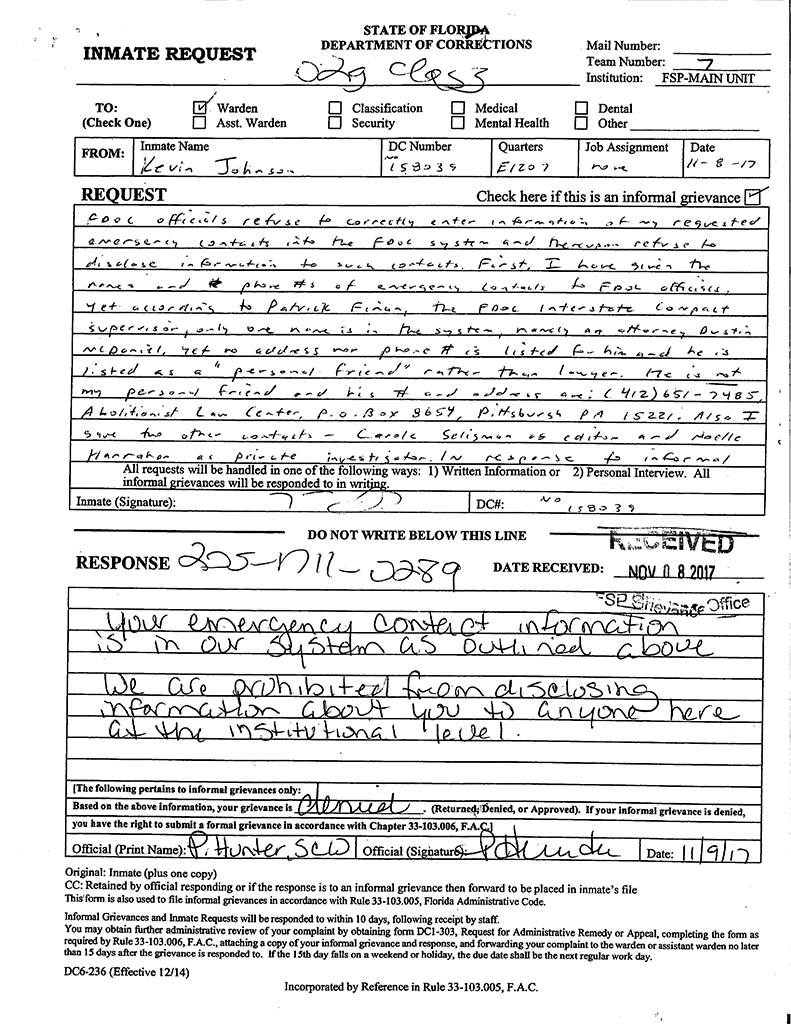 Furthermore, like a lynch mob, they mocked and made jokes about the prisoner, who died lying with his face pressed to a crack at the bottom of a solid steel cell door searching desperately for air, with a Bible in his hand.

But this isn’t the first time Reddish and his staff have retaliated against me for publicizing abusive prison conditions. My last article, “Lynching Culture,” brought a similar response, because I wrote about the frequent killings of prisoners by FDOC officials and quoted a ranking FSP guard, Sgt. Alvin Cazee, who in a veiled threat boasted to me about many such killings targeted at prisoners who create problems, and their being covered up as suicides.[vii]

Right after that article was published and Cazee read it online, he fabricated a DR claiming that a note was intercepted that I supposedly attempted to pass to another prisoner, which contained threats to send my “connections” after his family and the family of an FSP mental health worker. He even had a note forged stating this, in a handwriting and grammar nothing like my own.

Filing false DRs is a common practice in the FDOC. Actually, it is part of a “code” that guards are trained into. As a former FDOC guard revealed to the Herald:

“‘First, they teach you how to write a false DR [disciplinary report] against an inmate. They tell you you have to write it to ‘make it stick,’ to use certain language.

“Disciplinary reports result in a loss of privileges and can also lead to delays in an inmate’s release.

“‘Sometimes they will even write it for you – all filled with lies so they can say they beat or gassed someone because they deserved it,’ he said.

“Sometimes those reports written by corrections officers have a familiar cadence and wording.”[viii]

But the retaliation goes deeper still. Although prior prison systems denied as much, Florida admitted that I’ve been bounced from state to state and am now in Florida in retaliation for and with intentions to repress my publicizing prison abuses.[ix] They further admitted in writing that I’ve been thrown into solitary confinement for these reasons.[x]

Florida not only retaliates against prisoners who dare expose its abuses, however, but those who are persistent are outright disappeared.

It was done to Harold Hempstead, the prisoner, who witnessed and exposed the death of Darren Rainey, a mentally ill man who was killed in 2012 by FDOC guards who scalded him to death in a rigged shower at Dade Correctional Institution.

Rainey’s killing was swept under the rug for two years, until the Herald investigated and publicized it, based on Hempstead’s persistent letters and complaints about Rainey’s medieval torture.[xi] 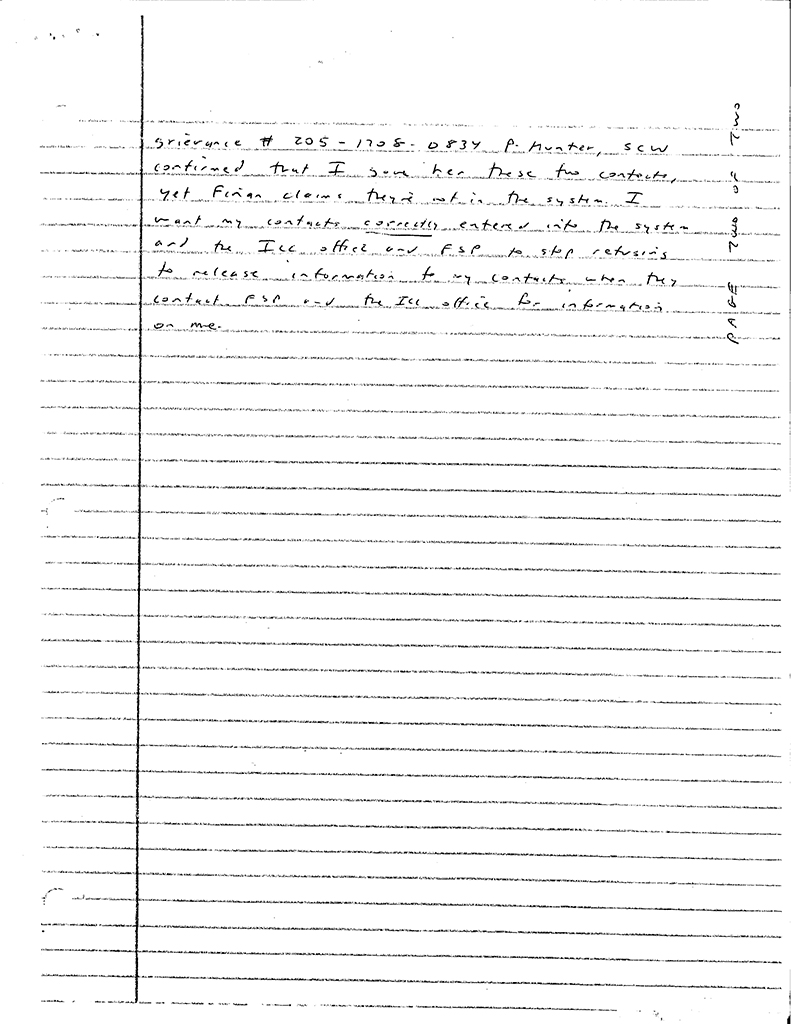 A staged official investigation was then re-opened in 2014 following the Herald’s exposé, which concluded with a March 2017 report exonerating Rainey’s killers and attempting to undermine Hempstead’s credibility. To complete the cleanup, on the same day the report was issued the FDOC transferred Hempstead out of state to an undisclosed location making him “unavailable” for any further comments to the media.[xii]

On June 22, 2017, the FDOC accepted me with similar designs to its treatment of Hempstead. Namely to silence and disappear a persistent witness to prison abuses.

On that first day in Florida, I was threatened by officials with physical harm and death if I persisted with my publicizing prison conditions.[xiii] It was in this vein that the FSP guard Cazee made his veiled threat to me that prison officials in Florida “disappear” and kill prisoners who create problems.

By using the term “disappear,” he was literally describing my illegal status in Florida, which is one of “enforced disappearance” – a criminal violation of international law.

A status invented by Nazis 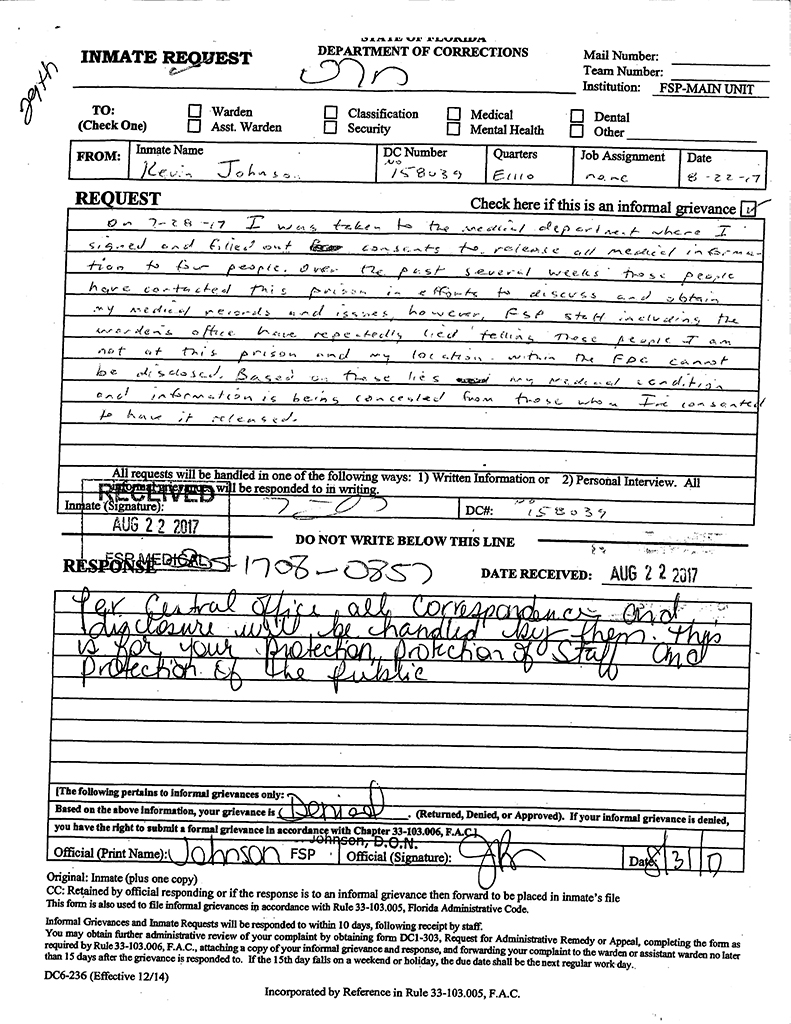 On Dec. 7, 1941, Adolf Hitler issued his Night and Fog Decree ordering that those “‘endangering German security’ who were not to be immediately executed” would be made to “vanish without a trace into the unknown in Germany.”

In 1946 Hitler’s Field Marshal Wilhelm Keitel was convicted in Nuremberg War Crimes trials for his role in enforcing the decree.[xiv] Since that judgment, enforced disappearance, which includes secret incommunicado detention, has been maintained as a crime under international law and is binding on all countries whether they are party or not to a similar treaty.

Such confinement is also banned under the December 2010 International Convention for the Protection of All Persons from Enforced Disappearance, which states under Article 17 that “No one shall be held in secret detention.”

My secret detention in Florida

As sinister as it sounds, and is, the FDOC has me formally confined under secret detention. It has only been through the persistent efforts and sacrifices of attorneys and media contacts that I have been able to communicate to the outside and make my whereabouts known. And it’s been an uphill battle every step of the way.

Under this secret detention status (or more notoriously known as “secret rendition”), I am being held in an officially undisclosed location and am being denied the means and ability to pursue my legal rights and unlawful custody in my home state of Virginia. I can be secretly moved around the state of Florida at any time. 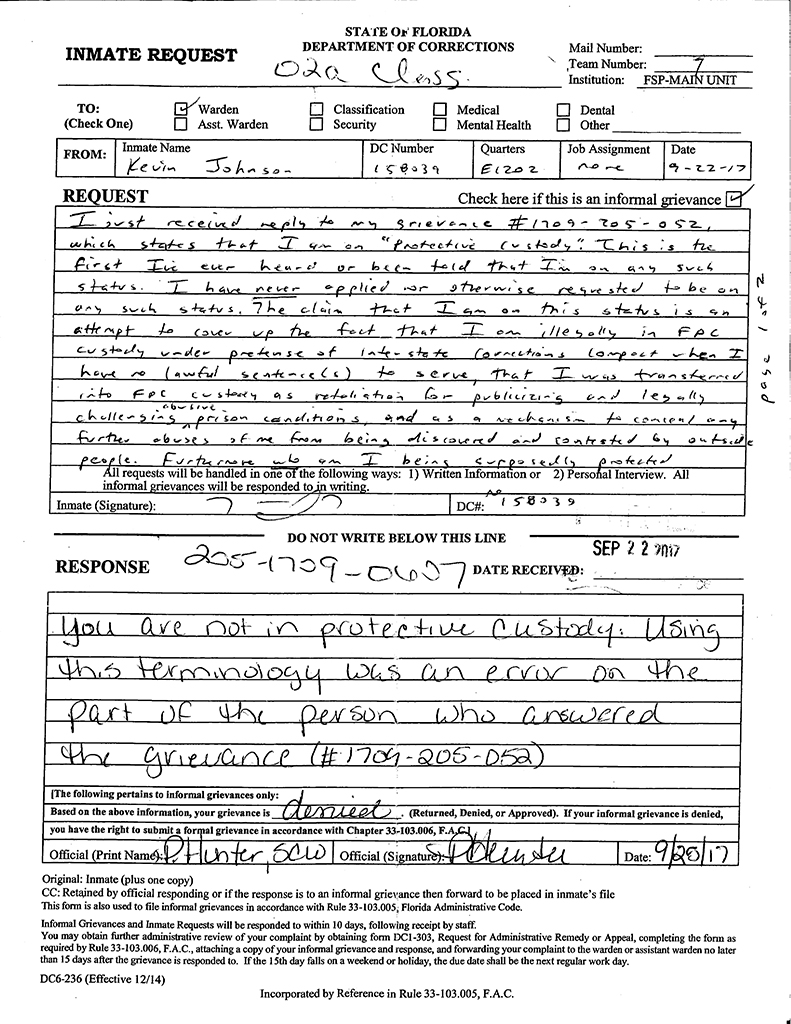 The FDOC has tried to keep my location hidden, even lying to those who’ve inquired, telling them I’m not at FSP or am at other FDOC prisons that I’ve never been to, like the Northwest Florida Reception Center.[xv] In fact, FDOC headquarters has FSP officials under strict orders to disclose no information about me to anyone and to tell anyone who contacts the prison about me that I’m not here and they should contact headquarters who, as said, will divulge nothing. Any outside reader is free to test any of this.

In fact, in my referral to solitary confinement, FDOC officials claimed that having my location publicized online presented a “security threat.” So I’m the only person confined in FDOC custody for whom there is no public accountability or scrutiny.

I’ve grieved this treatment and bogus “special status” repeatedly but have been told emphatically that “IT WILL NOT CHANGE.” (Some of these efforts and responses are posted with this article.)

If any reader goes to the FDOC website to look me up on the inmate locator, you will find that I’m the only person confined in the FDOC whose name and location are not in the prisoner database.

I’ve been blocked from making phone calls, unlike other FDOC prisoners. I’ve had my mail blocked, and have been repeatedly obstructed, censored and harassed in my communications with attorneys, courts and the media. 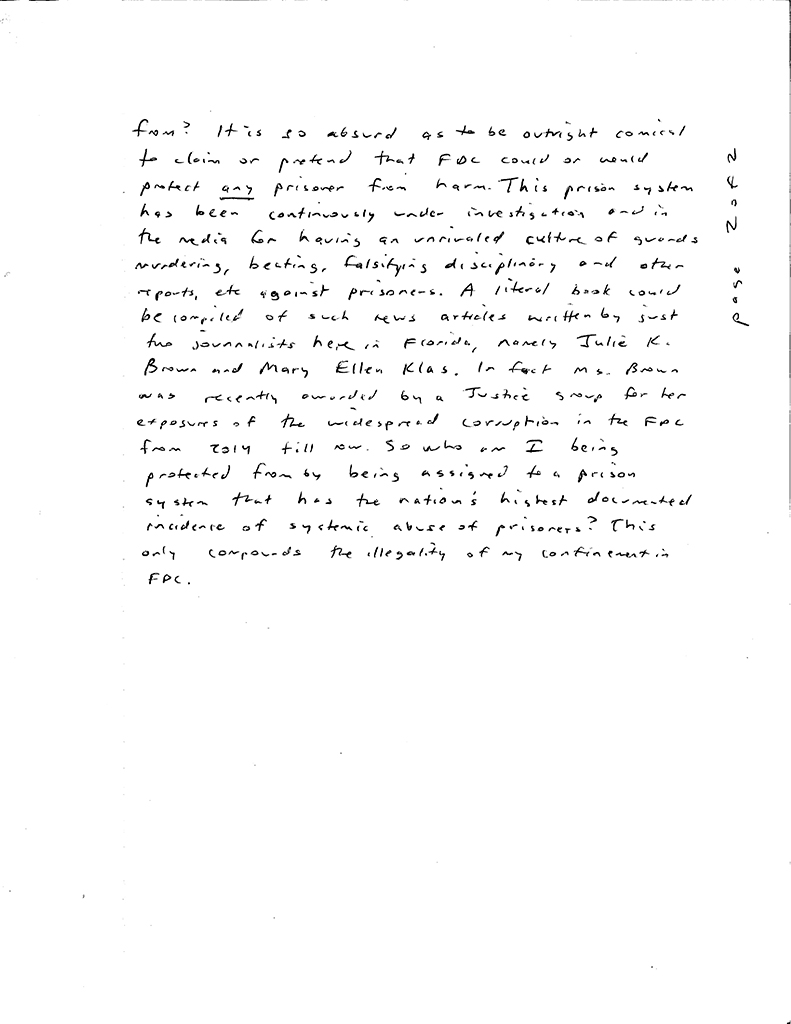 All of which is in violation of the most basic U.S. constitutional and international laws.

All of which is in response to my involvement in exposing to the public the inhumane abuses occurring behind the hidden walls of U.S. prisons.

These are the lawless extremes to which a lawless power structure will go to conceal its true criminal nature from public scrutiny, in efforts to preserve its mask of legality, legitimacy and public accountability.

What dictatorship that preys on the powerless has ever willingly shown its true face to the masses who have the power in numbers to overthrow it, or has not acted to repress those who dare to expose it and open the people’s eyes?

I will never waiver in speaking truth to the people, because there is no power like the awakened masses!

[i] The article was cited by the FSP warden as posted on itsgoingdown.org.

[xv] For a while my outside support circle and legal team didn’t know where I was due to FDOC officials lying about and concealing my location. See post, “Denied Medicine, Location Unknown: Urgent Update on Kevin ‘Rashid’ Johnson.” http://rashidmod.com/?p=2453