Community members and clergy from the Black, Latino, and Pacific Islander communities gathered in Southeast San Francisco on May 12 to ask candidates for Mayor what they plan to do about the city’s stark achievement gap for low-income students. Candidates Angela Alioto, Richie Greenberg, Amy Farrah Weiss and Ellen Lee Zhou heard from parents who spoke of their frustration with the lack of opportunities afforded to their children and the inequities of the current school system. The other three candidates did not attend.

The candidates spoke passionately of the need to address the crisis, each offering different angles from which to approach it. Then, candidates Alioto, Greenberg and Zhou signed the Children First Pledge, committing to supporting policies that put children first and working toward the goal of increasing by 10 percentage points the proficiency of low-income African American, Latino and Pacific Islander students by the end of the 2018-19 school year, and then another 10 percentage points by the end of the 2019-20 school year. Farrah Weiss had to leave the forum before the pledge was introduced. 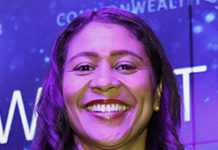