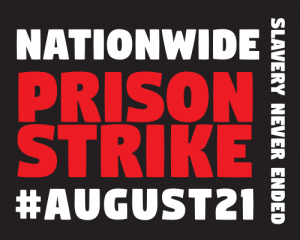 This call is for a two-week national strike beginning on Aug. 21, the anniversary of George Jackson’s assassination, and extending until Sept. 9, the anniversary of the Attica Prison Rebellion in 1971. The call has been taken up inside from coast to coast, and across at least 17 different states. The author of this call, Jailhouse Lawyers Speak, is a national collective of incarcerated people who fight for human rights by providing other incarcerated people with access to legal education, resources and assistance.

Men and women incarcerated in prisons across the nation declare a nationwide strike in response to the riot in Lee Correctional Institution, a maximum security prison in South Carolina. Seven comrades lost their lives during a senseless uprising that could have been avoided had the prison not been so overcrowded from the greed wrought by mass incarceration and a lack of respect for human life that is embedded in our nation’s penal ideology.

These men and women are demanding humane living conditions, access to rehabilitation, sentencing reform and the end of modern day slavery.

These are the NATIONAL DEMANDS of the men and women in federal, immigration and state prisons:

We all agree to spread this strike throughout the prisons of Ameri$$$a! From Aug. 21 to Sept. 9, 2018, men and women in prisons across the nation will strike in the following manner:

We support the call of the Free Alabama Movement Campaign to “Redistribute the Pain” 2018 as Bennu Hannibal Ra-Sun, formerly known as Melvin Ray, has laid out – with the exception of refusing visitation. See these principles described here: https://redistributethepain.wordpress.com/.

To reach Jailhouse Lawyers Speak, contact Oakland IWOC (Incarcerated Workers Organizing Committee), whose motto is “Inside Outside All on the Same Side,” email iwoc.oakland@gmail.com. Contact them to endorse the strike.