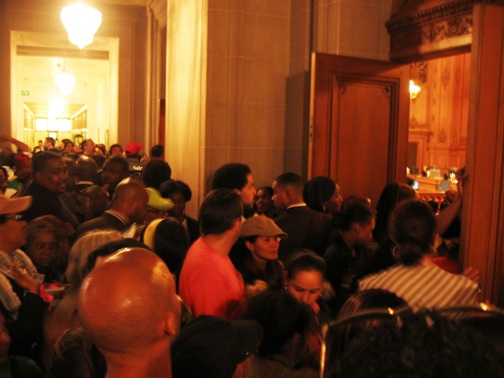 At Tuesday’s Board of Supervisor’s meeting, the 253 seats of City Hall’s main chamber were not enough – so many people attended that people had to sit in separate rooms on the first floor and watch the proceedings on television screens. And throughout the meeting, people stood outside the main chamber’s doors, waiting their turns to speak to the Board.

The issue on the agenda that galvanized so much community participation was Supervisor Chris Daly’s resolution to temporarily stop the Lennar Corp.’s work at the Hunters Point Shipyard in order to properly assess the health impacts of the environmental hazards it is causing. Lennar’s excavation of approximately 1.2 million cubic yards of earth on Parcel A since early 2006 has sent vast amounts of asbestos laden dust into the air which has blown into the surrounding neighborhood, and many feel their health has been compromised as a result.

“A few years ago we adopted the Precautionary Principle requiring public servants to take anticipatory action to prevent harm and select courses of action that present the least threat to all,” Daly said. “We’ve been hearing for months now from unusually large numbers of residents, students, workers and people who visit the Bayview Hunters Point. Their voice has been clear and strong, and their demand for a temporary stoppage so that an independent health assessment can be conducted is an especially reasonable demand,” Daly said to audience applause.

Although it seems to be common sense that such activity would pose a health risk, the science is apparently not so clear. Dr. Mitchell Katz, director of the San Francisco Department of Public Health, stated that “our overall professional judgment based on all the available information is that there is no health risk posed by the development of Parcel A.” 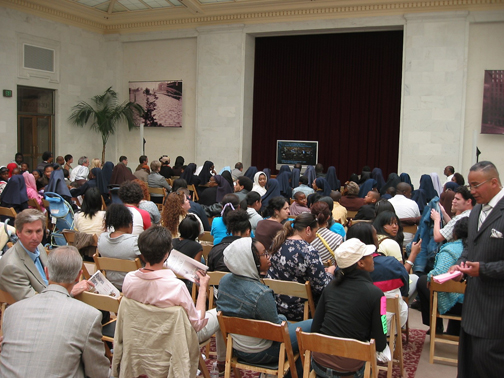 Dr. Katz stated that an asbestos level of 16,000 ppm is well within established safety limits, even though Lennar has routinely violated that threshold throughout the excavation process. In fact, there were nine documented excesses in July alone. The best available solution? Spraying $50,000 worth of water per week across the site to keep dust clouds from escaping, said Dr. Katz. The ideal solution? “We would all want to avoid asbestos,” he said.

Apparently there are no known tests, other than a biopsy, to adequately determine asbestos exposure. The logic of Dr. Katz’s argument seems to be that there is not much that can be done at this point. No wonder many in the community have lost faith in the Health Department.

Soon after Dr. Katz’s testimony, the floor was opened for public comment. Because of the sheer numbers of people wanting to speak, responses were limited to one minute each. So little time to articulate their opinions limited people to either agree or disagree with the Daly resolution, then rush to support their argument before the buzzer sounded and the microphone turned off.

The vast majority spoke in favor of the Daly resolution, telling story after story of symptoms and illnesses such as nosebleeds, headaches, asthma, bronchitis and skin rashes affecting them and their loved ones.

“The Bayview Hunters Point community is suffering. My family is sick – nosebleeds, asthma, you name it. If the shipyard reconstruction and development is safe, then what is the hesitation in proving it?” asked one.

“Please understand that we are not asking for a permanent stoppage. We’re asking for the work to temporarily be halted until the effects of the toxic exposure of the residents in proximity to the Shipyard can be assessed,” said Bishop Ernest Jackson.

“I have a young child in the Bayview. I would love for him to be tested and know that he has not been affected by the dust. It would also be good to know because if, God forbid, 20 years from now, he begins to experience any complications that could have been from asbestos exposure, that there would be a record for my child,” said one mother.

But there was a minority who disagreed. Many of them wore “Shipyard Yes” t-shirts and complained of no recent illnesses. “I am as healthy as anyone in this room. There are no contaminants in our neighborhood or we would know it,” said one.

The issue of jobs was also raised. “I’m in charge of local hiring at the shipyard. To stop the Shipyard is to put people out of work,” said the director of construction at Young Community Developers (YCD).

After public comment finished, several of the Supervisors spoke their mind on the issue.

“I agree that it is a false choice to have to choose between a healthy environment and economic opportunity,” said Supervisor Daly. “Because of that I want to add a further clause urging Lennar to continue paying its employees through this work stoppage.”

“If we want to move forward with a clean conscience, then let’s call for proper testing to be done instead of making people decide that it’s either about their health or about their jobs,” said Supervisor Ross Mirkarimi.

“Clearly something has to be done differently. The community voice is growing stronger and more divisive. The bottom line is there is a credibility gap. There are so many cases where the government has lied to its citizens. If we want to see this project succeed, we need to come up with some kind of community process to establish credibility,” said Supervisor Gerardo Sandoval. “If we don’t vote for this resolution, it sends the wrong message.”

Supervisor Sophie Maxwell, who represents the Bayview Hunters Point community, made no comments.

But this is not the end of the fight. This is the first time there has been such a close vote, and next time, with even more community support, we can turn the tide.

Chris Brizzard is a graduate student in media studies at New College and an intern at the Bay View. Email him at cepheus_1@msn.com.