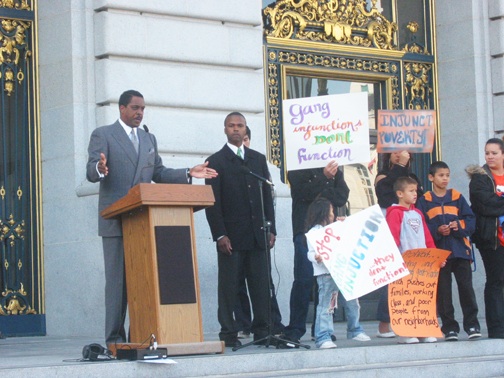 On Wednesday, Oct. 31, a coalition of Black and Brown groups and individuals gathered at City Hall to express their opposition to San Francisco’s gang injunctions. Several themes emerged from those who addressed the crowd, including gentrification, racial profiling and the misuse of city money. During the course of the rally, it became clear that City Attorney Dennis Herrera, the political force behind the injunctions, has become an extremely unpopular figure in Bayview Hunters Point, the Mission and the Western Addition – neighborhoods in which the gang injunctions are now in place.

“This injunction does not attack the root causes of the problems of gangs or violence in any of our communities,” said Nancy Hernandez of HOMEY (Homies Organizing the Mission to Empower Youth). “We want the city to specifically invest money targeting the problems in the Mission such as poverty, gentrification, lack of jobs and lack of after-school programs that provide a safe space for young people to be in their own neighborhoods.”

Hernandez then focused her attention on the city attorney. “We would like to block [Dennis Herrera] from entering our neighborhoods because of his criminal activity,” said Hernandez. “He has been associating with the Gang Task Force, which is known to use gangster tactics such as picking up people on one side of a neighborhood and dropping them off in rival territory, stepping back and allowing them to be beaten, or going up to young people themselves as police officers undercover and beating [them],” she said.

This raises the ugly connection between gang injunctions and racial profiling, which has become a very real problem in Bayview Hunters Point, the Mission and the Fillmore.

“One of the things that I see is people hanging out on the streets, right down the street from individuals that are on this gang injunction list, such as the white people down on 24th and York,” said Joe Robles, outreach coordinator for the Mission Community Response Network. “The only thing I see them doing is something that I could never do in life, [which] is hanging out in front of a store and drinking. As soon as I did that, I was pulled over, slammed on the ground, handcuffed and taken to jail.”

People are also concerned about the scope of the racial profiling. Just how wide a net is being cast by these injunctions? “I’m here to tell you my point of view on the gang injunctions from a young person of color,” said a youth from HOMEY. “To me, it’s just giving police the right to look at us and say we’re criminals, when really they’re the ones causing pain for all our families and all the kids trying to go to school and get an education, and that ain’t right,” she said.

Talk of gentrification was also in the air. “Sometimes when you’re trying to communicate, you have to use the right language,” said Minister Christopher Muhammad of the Nation of Islam. “Many times, we’re talking about this word ‘gentrification’ but the real word we should be using in describing what’s going on in San Francisco is ethnic cleansing, the removal of an undesirable population and replacing it with a more desired [one].”

Minister Christopher further challenged the use of conventional language by highlighting what he and others are calling the “downtown developer gang.”

“They meet at the Fairmont, at the Mark Hopkins, at the Bank of America Building and they discuss what they’re going to plan to remove people from these communities,” he said. “Then they gather the political people they bought, they gather the law enforcement people that they control, and their job is to hit these communities with all guns blazing to produce conditions that will make people want to flee, and if you don’t move fast enough, [they] will move you at the speed of light under the guise of gang injunctions.”

As a way of fighting back against the injunctions, organizer and attorney Renee Saucedo of La Raza Centro Legal, a non-profit community law center, had prepared an injunction of her own. “We’re not afraid of City Attorney Dennis Herrera, are we?” she asked the crowd. “No!” they yelled back. “What we’re going to do now is, we’re going to walk up to the city attorney’s office to serve him with an injunction,” said Saucedo.

And they did just that. A group of about 40 went to Herrera’s office to present him with the injunction, though Herrera was not there to accept it personally. The demands include:

Clear and fair criteria to get off the injunction list;

Guaranteed support services for those in the injunction list;

A clear process to get off the injunction list that does not involve people having to serve as informants;

An official investigation of police misconduct and racial profiling during the enforcement of the injunction;

A public commitment from city officials to implement a long-term violence prevention plan that addresses the root causes of violence;

A moratorium on future gang injunctions in San Francisco.

For more information about community efforts to stop the gang injunctions, contact Renee Saucedo of La Raza Centro Legal, at (415) 553-3404 or by e-mail at renee@lrcl.org.