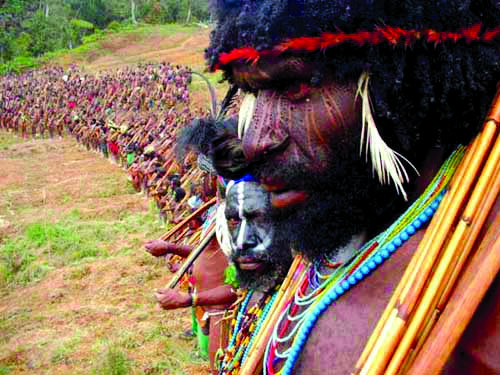 In West Papua, New Guinea, Foreign Minister Ben Tanggahma told an interviewer in 1976: “Africa is our motherland. All of the Black populations which settled in Asia over the hundreds of thousands of years came undoubtedly from the African continent. In fact, the entire world was populated from Africa. Hence, we the Blacks in Asia and the Pacific today descend from proto-African peoples. We were linked to Africa in the past. We are linked to Africa in the future. We are what you might call the Black Asian Diaspora.”

“(P)oor, disinherited Black populations – both in East Timor and West Papua New Guinea – are fighting against a yellow supremacist, racist, expansionist, colonialist and fascist empire: the Republic of Indonesia,” he said. “We on the island of New Guinea and on the island of Timor belong to what is known as Melanesia, or Black Islands, if we translate it literally.”

Since 1963 West Papua has been occupied by the Indonesian armed forces. For the past 44 years, the people of West Papua have been subjected to gross human rights violations including rape, torture, cultural genocide, murder and massacre – more than 100,000 West Papuans have been killed. Over 15,000 West Papuans are currently living in camps in Papua, New Guinea, and others are forced to live in exile around the world because it is not safe for them to go home.

Multi-national corporations in cahoots with the Indonesian authorities have exploited West Papua’s natural resources to an extraordinary degree. This has caused massive social dislocation, devastation of rain forests, pollution of streams and rivers on which the local people depend for their survival, and serious human rights violations in areas of where multinationals are active.

There have been repeated ongoing calls from West Papuan leaders for dialogue to turn West Papua into a “land of peace,” but these have been ignored by the Indonesian authorities. The number of Indonesian troops deployed in West Papua continues to increase; earlier this year it was reported that there are plans to build up the troop presence along the border with Papua, New Guinea, and to deploy a new third division of Indonesia’s Kostrad (strategic reserve command) troops “to patrol Papua border areas and other conflict-prone regions.” It is estimated that the proportion of soldiers in West Papua is around one soldier for every 44 civilians.

In June 2007, following an investigative mission in West Papua and Indonesia, U.N. Special Representative of the Secretary General on the Situation of Human Rights Defenders Hina Jilani stated: “The Special Representative is deeply concerned by the testimonies that she has heard indicating the continuing activities of the police, the military and other security and intelligence agencies that are aimed at harassment and intimidation of defenders or to restrict their access to victims and to sites of human rights violations.

“She found this trend more pronounced in the Province of West Papua. She has heard credible reports of incidents that involve arbitrary detention, torture, harassment through surveillance, interference with the freedom of movement and in defenders’ efforts to monitor and investigate human rights violations. She was also informed of cases where human rights defenders were threatened with prosecution by members of the police and the military. It was alleged that when defenders have attempted to register their complaints, this has been denied and the defenders threatened.

“She is also concerned about complaints that defenders working for the preservation of the environment and the right over land and natural resources frequently receive threats from private actors with powerful economic interests but are granted no protection by the police. She is particularly disturbed by allegations that when defenders expose abuse of authority or other forms of human rights violations committed by the security apparatus, they are labeled as separatists in order to undermine their credibility. The Special Representative believes that this trend places human rights defenders at greater risk and must be discouraged by the concerned authorities.”

TAPOL, a UK-based organization campaigning to expose human rights violations in Indonesia, East Timor, West Papua and Aceh, has reported that the level of intimidation against human rights defenders, political activists and religious leaders by military and intelligence personnel has increased markedly since the visit of the U.N. Special Representative. As well as the direct violent repression by Indonesian armed forces, they are creating armed militias, similar to what they did in East Timor. 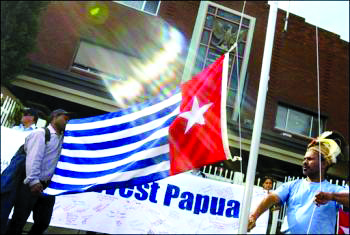 The first of December is the anniversary of the 1961 West Papuan Declaration of Independence from Dutch colonial rule and is observed by people in West Papua and by solidarity groups around the world.

In West Papua people mark the day in a variety of ways, including raising the “Morning Star,” the West Papuan flag. In previous years the Indonesian military and police have responded with increased violent oppression around this day, arresting and killing those they perceive as pro-independence activists.

On Dec. 1, 2004, among the West Papuans arrested were Filep Karma and Yusak Pakage who organised peaceful celebrations and raised the Morning Star flag in Jayapura. On May 26, 2005, an Indonesian court sentenced Philip to 15 years imprisonment and Yusak to 10 years.

More than 20 people were arrested this Dec. 1 as they raised the outlawed “Morning Star” separatist flag. About 500 Papuan students staged a rally in Indonesia’s second largest city of Surabaya in East Java in support of Papuan independence.

Last year, Kelly Kwalik, a leader of OPM, the outlawed Free Papua Movement, and one of the most wanted men in Indonesia, told the UK Channel 4 show Unreported World that West Papua is rich in natural resources but that Papuans remain poor while Indonesians benefit. When OPM members raise their flag, the act is a potent symbol of how an argument over mineral resources has become a battle against the slow suffocation of a people and their way of life.

Messages of solidarity for the people of West Papua

You are invited to add your voice to those of people around the world who are calling for justice, peace and self-determination for the people of West Papua. “Messages of solidarity” is an ongoing initiative that was launched on Dec. 1, 2004.

Email your name, address, occupation or position and organization (optional), and message to pma@xtra.co.nz. Only your city will be shown on the web page, not your full address. “Messages of solidarity” forms are posted at www.converge.org.nz/pma/wpsol.htm for supporters to circulate.

More information about West Papua, and what has happened on Independence Day in previous years, is available on the “West Papua: the forgotten Pacific country” web page at www.converge.org.nz/pma/wpapua.htm.

“Fanning the Flames: The role of British mining companies in conflict and the violation of human rights,” especially the section on the Grasberg Freeport mine, “War on Want,” November 2007: 24-25

“Special Representative of the Secretary General on the Situation of Human Rights Defenders concludes visit to Indonesia,” June 12, 2007, www.unog.ch/unog/website/news_media.nsf/(httpNewsByYear_en)/BE784D6258894C79C12572F8006164BE?OpenDocument

To the Oakland City Council re its $250,000 corporate cop contract