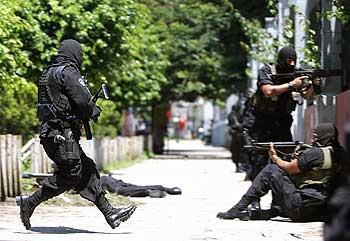 “We’re under domestic insurgency. If we don’t get it, it will get us.” – California Attorney General Jerry Brown, Anti-Gang Conference, Riverside, Calif., December 2007

“We’re mounting a coordinated, aggressive suppression strategy that targets the worst offenders and the most violent gangs. We’re converging local, state, federal and even international efforts … coming at them with everything we have.” – Los Angeles Mayor Antonio Villaraigosa, Feb. 8, 2007, press conference

On May 1, 2007, Los Angeles Police Chief William Bratton was scheduled to visit El Salvador with Mayor Antonio Villaraigosa to announce a new policing partnership between Los Angeles, Mexico and El Salvador. His plans were interrupted, however, by a brutal LAPD attack on a peaceful immigrant rights rally in MacArthur Park. Riot police stormed the park, assaulting the crowd with teargas, clubs and rubber bullets, then trampling and beating two mainstream journalists and chasing people into the streets.

Villaraigosa made the visit to El Salvador alone. Insisting that he wouldn’t let “the immigration issue” distract from the purpose of his trip, the mayor tried to distance himself from police violence at home while depicting El Salvador as a new frontier in trade and tourism but lacking in security. What he did not disclose, of course, was the fact that the Salvadoran National Police (PNC) has been at the forefront of El Salvador’s safety concerns, having been recently implicated in eight political assassinations, an attack on a student march at the National University, at least a dozen violent raids on street vendors and two student disappearances since the opening of a new U.S. police training academy in El Salvador – the International Law Enforcement Academy (ILEA).

Instead, he attributed El Salvador’s instability to “gangs” and signed an additional contract with the director of the PNC, Rodrigo Avila, “to track and detain cross-border gang members and Salvadoran deportees.” Under the agreement, officers from the Los Angeles Police Department’s gang unit share training, tactics and intelligence with the Salvadoran force. The program is intended to augment Salvadoran President Tony Saca’s “Mano Dura” (Iron Fist) policy, a severe version of former New York Mayor Rudy Guiliani’s Zero Tolerance Policy.

“These laws are never intended to solve crime,” says FMLN deputy Lorena Peña, “but to criminalize the poor. Now there’s the anti-terrorist law and the people of the informal sector, unions and organizers have come under increased repression – all under the guise of stopping crime. The right has a policy of keeping people terrorized by selectively murdering organizers and people on the left to strike fear.”

In the seven months that followed Villaraigosa’s visit, the PNC carried out another massive raid on street vendors in San Salvador that resulted in the brutal arrests of 28 street vendors, an attack on a water privatization protest in Suchitoto where 14 people were arrested and an invasion of a rural community, Cutumay Camones, in Santa Ana on behalf of a private sewage company that resulted in a four-month-long standoff.

The 28 street vendors and 14 Suchitoto protestors were charged with “acts of terrorism” under the Salvadoran right wing’s new anti-terrorism law. The Law against Acts of Terrorism criminalizes the “simulation, preparation, financing and organizing of any mobilizations and other acts of protest.” While the charges on the vendors were eventually dropped, the Suchitoto charges still stand and, if found guilty, protestors could spend up to 60 years in prison for organizing a street march.

The PNC’s actions and the Salvadoran government’s interpretation of terrorism have been consistently endorsed by the U.S. State Department. Before he was forced to resign, U.S. Attorney General Alberto Gonzales initiated the first phases of the U.S.-Salvadoran “anti-gang” agreement and suggested that the Salvadoran government consider also implementing the death penalty.

Upon leaving his post as U.S. ambassador in 2007, Douglas Barclay applauded the ARENA government’s achievement of approving the Anti-Terrorism Law and urged officials to apply it and create more repressive laws – including authorization for domestic surveillance of phone calls – under the pretense of fighting crime.

“First they opened an FBI office and there’s an INTERPOL office here as well,” said a member of FUNDESPAD, a Salvadoran human rights monitoring group, in March 2006. “Now they’ve opened this police training academy. It’s beginning to look a little bit like the X-Files in El Salvador.”

The U.S. State Department has been steadily rebuilding its presence in El Salvador since 2002. That year, the Bush administration supported an attempted coup of Venezuelan President Hugo Chavez that failed. Since that time, Latin America has elected its first indigenous leader, Evo Morales, in Bolivia, a socialist economist in Ecuador, Rafael Correa, and two center-left presidents in Central America, in complete defiance of the Washington Consensus.

The uprising in Oaxaca, Mexico, before, during and after the heavily contested presidential victory of Felipe Calderon is perhaps one of the best illustrations of changing power dynamics and national uprisings throughout the region and clear evidence that the U.S. is quickly losing influence.

After a complete round of regional elections, Latin America has left Washington with only lukewarm support of the U.S.’s “trade expansion” plans – or neocolonial project – and almost nowhere to settle down militarily except in Colombia, where corporate-financed right-wing militias and left-wing guerilla forces are entrenched in a civil war almost two centuries old, and in El Salvador, where the right-wing ARENA party – founded by former death squad architect Roberto D’Abuisson – has exercised social control through brutal economic, electoral and military repression tactics that Washington is eager to reward, refine and replicate.

The FBI opened an office in El Salvador in January of 2005, several months before the Bush administration engineered the narrow passage of CAFTA (Central American Free Trade Agreement) through the U.S. Congress. Recognizing massive opposition on the ground to CAFTA, Condoleezza Rice announced the opening of the U.S.-sponsored ILEA (International Law Enforcement Academy) in El Salvador to “enhance the functioning of free trade … and to make Latin America safe for foreign investment.”

Fifteen Latin American countries have sent police recruits to the ILEA to be trained by U.S. Department of Homeland Security in social control and political repression. Not surprisingly, many Latin Americans call the ILEA the “School of the Americas for the police,” intended to train thousands of police recruits in torture and repression tactics traditionally carried out by the military.

“They’re trying to proscribe fear into the public’s imagination …,” observed Lorena Peña, historic leader of the FMLN, El Salvador, “but the left is not a Bonsai plant. We will not be sculpted.”

Less than one week after the first batch of ILEA recruits were graduated in 2006, Radio Venceremos founder Mariposa Manzanares’ parents were assassinated on July 1, touching off a surge of political assassinations that continued through the winter. Four days after the Manzanares executions, an elite unit of the PNC called the UMO ambushed a student march against bus fare and cost of living increases and the Salvadoran military attacked, invaded and occupied the National University in what the Human Rights Office declared “the worst case of military violence in El Salvador since the signing of the Peace Accords” in 1992.

The constant and growing response from the Salvadoran social movement has been mass mobilization on every front of the government’s attacks. The FMLN, former guerilla force turned political party that governs over 40 percent of the country’s population, has been consistently winning higher percentages of the popular vote as each election year passes.

While the Latin American left is convinced that this coyuntura, or blend of political forces in the region, paints the picture of a falling empire and the “beginning of the end of 500 years of colonialism,” Washington’s right wing allies are pulling out every weapon in the cache. There is no mistaking the parallel between the U.S.’s mounting presence in El Salvador and the resurgence of death squad assassinations in El Salvador, just as there is only a thin veil between “war on gangs” rhetoric and the recent attempts of the federal government to intervene in local law enforcement on cases relating to immigration in the U.S.

Terrorism trials for the Suchitoto 13 will begin on Feb. 8, 2008. Stand in solidarity and defend the right to organize!

For more information, visit the CISPES (Committee in Solidarity with the People of El Salvador) website at www.cispes.org, sister-cities at www.sister-cities.org, SHARE at www.share-elsalvador.org.