Sunday’s fundraiser for the Bay View newspaper, showing the independent documentary “Banished” at Grace Tabernacle Church, was the place to be. After a late start, the Marco Williams documentary had the predominantly Black crowd’s jaws tense and eyes blazing with the need for justice in the cases of the three communities that had thriving Black land-owning populations and were driven out and had their land stolen by white mobs, complicit with the government. The flick looks at the present-day ramifications of these “banishments,” aka land grabs, and talked to the descendants of the people who were “banished” and to the beneficiaries of these “banishments,” who still live in all-white communities to this day.

We have all heard the tales about how racist Amerikkka is, but it is nothing like seeing it in interviews with the white beneficiaries. After the flick was done, Minister Christopher Muhammad of the Nation of Islam spoke about the importance of helping to finance the Bay View newspaper, which is an important tool in educating our people as well as in fighting political battles relevant to the community like the fight against Lennar Corp., which is unearthing and exposing the community to poisonous asbestos-laced dust, a byproduct of its construction sites, where it is building housing to gentrify the low and middle income predominantly Black population of Bay View Hunters Point.

After speaking very thoroughly on the fight against Lennar in the keynote address of the evening, Minister Muhammad was one of five people on a panel that discussed the “banishment and banishing” of San Francisco’s Black and Brown populations. He was joined by Alicia Schwartz from POWER, who gave a lot of bullet point facts about the history of San Francisco as well as the current wrongdoings of this corporation specifically in Hunters Point.

Espanola Jackson spoke about the need for San Francisco voters to support Prop F – Yes on F – which would mandate that 50 percent of the newly built housing be affordable to low income and other marginalized people. Valerie Tulier, an activist in the Mission against the land grab, a strong ally in coalition with the Hunters Point anti-Lennar organizing group, talked about the need for Black and Brown people to fight in principled coalitions against entities attacking both groups. Fillmore’s Daniel Landry and lastly Minister Christopher Muhammad both stressed how people need to get involved right now, in a fight right before their very eyes in Hunters Point.

The day was a good one, where SF Bay View Publisher Willie Ratcliff was smiling from ear to ear, happy with the turn-out of over 60 people, the intricate detailed information that was presented about the fight in the community that he lives in, as well as the $500 that was raised to benefit the newspaper.

If you missed it, the SF Bay View and POCC: Block Report Radio will be hosting another panel and showing of “Banished” to benefit the paper on May 18 at La Pena Cultural Center in Berkeley. POCC: Block Report Radio will be hosting a showing at the Black New World, at 836 Pine in West Oakland, on March 29 at 7 p.m. I hope to see you at one of these and other future events. 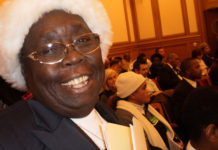