No blood for municipal natural gas combustion turbine power plants – not in Bayview Hunters Point, not at SFO, not anywhere near San Francisco

The current plan to launch yet another environmental assault on Bayview Hunters Point, with three natural gas turbine combustion power plants, and yet another at the San Francisco International Airport, was tabled for two weeks by the Board of Supervisors on May 20. Like Nancy Pelosi, who could have called in all her Congressional debts and thus defunded the war within a week of taking office, and like San Francisco’s annual all forces military recruitment drive, Fleet Week and the Blue Angels Air Show, our city’s natural gas power plants remind me that San Francisco’s anti-war veneer is now worn close to threadbare.

I’ve never been able to think about those natural gas turbine combustion power plants without wondering not only why the citizens of San Francisco have to place even more of our toxic load on Bayview Hunters Point, but also why we, the citizens of San Francisco, are about to further participate in the violent competition for so much of the world’s natural gas reserves, which dovetails all the violent competition for the world’s petroleum reserves.

Googling “Iraq” and “natural gas” brings up interesting information like this from the Feb. 19 New York Times story, “Iraqi Sunni Lands Show New Oil and Gas Promise”: “Huge petroleum deposits have long been known in Iraq’s Kurdish north and Shiite south. But now, Iraq has substantially increased its estimates of the amount of oil and natural gas in deposits on Sunni lands” in Iraq’s western Anbar Province. A Feb. 14 story, “Adopting Iraq as a major source of natural gas,” from IraqDirectory.com begins, “Iraqi and Europeans officials agreed to continue seeking closer links between them in the area of energy, to turn Iraq into a main gas supplier to Europe and reduce the dependence of EU countries on Russia.” 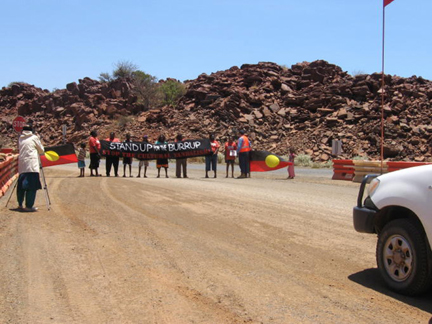 And consider natural gas producing countries like Nigeria, Angola, Niger, Indonesia and Australia – meaning, of course, the Black “aboriginal” first nations of Australia – where foreign powers back huge multinational oil and gas corporations as they maneuver to control natural gas extraction and export, just as they maneuver to control the world’s petroleum reserves, through clandestine operations or outright military intervention.

Foreign powers backing the fossil fuel multinationals in these nations empower, arm and bribe authoritarian regimes who violently crush any protest of environmental and cultural damage and/or resource theft and introduce enough small arms, especially into African nations, to keep disaffected rebels forever fighting one another for a share of unfair and ill distributed foreign revenue streams.

Many of the people in the natural gas/LNG (liquefied natural gas) producer nations, like much of Native America, have little or no electricity (e.g., see http://indonesia.elga.net.id/indoway/electric.html). Right now, still without having provided electricity to Indonesians, Indonesia, long a leading global exporter of natural gas, is running out of natural gas reserves (see www.iht.com/articles/2006/08/09/bloomberg/bxgas.php).

Does the City of San Francisco really have to become, even further, a player in the wars for oil and natural gas? 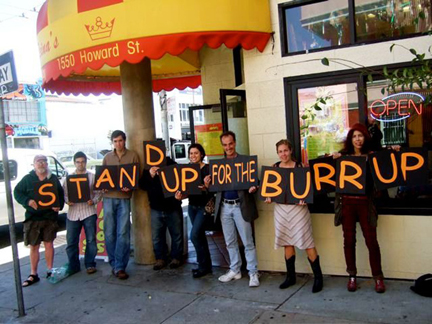 Does even our elected city government, Mayor Gavin Newsom and our San Francisco Board of Supervisors, have to further involve and implicate us in the ongoing dirty energy wars, as well as the environmental degradation involved in natural gas drilling, natural gas pipelines and the fossil fuel intensive natural gas liquefaction process just to operate natural gas power plants – like PG&E, to generate electricity for San Francisco?

Where is this natural gas to power new power plants in BVHP and at SFO going to come from?

I wrote to ask our San Francisco Public Utilities Commission (SFPUC) where the natural gas to power these four natural gas turbine combustion power plants would come from. I received no answer for several weeks, until I wrote again, stressing that I was submitting a Sunshine Ordinance Task Force request.

However, setting the SOTF and the Ethics Commission aside, I think we can all agree that the SFPUC’s assertion that this natural gas is coming from California is just another Kafkaesque bureaucratic absurdity.

The natural gas to fuel those natural gas turbine combustion power plants in Bayview Hunters Point and at SFO, if they are indeed funded and built, will be extracted in far away countries exploited ever since the outset of European conquest, in places like Indonesia, Australia, Africa and Iraq. That means more “Blood for Oil” and more “Blood for Natural Gas,” both in these natural gas producing countries and in one of San Francisco’s internally colonized neighborhoods, Bayview Hunters Point, where the disgraceful rates of pollution-related diseases are so many times higher than those in the rest of the San Francisco.

STAND UP FOR THE BURRUP against natural gas

Here’s just one example of natural gas exploitation in one of the producer nations, Australia: 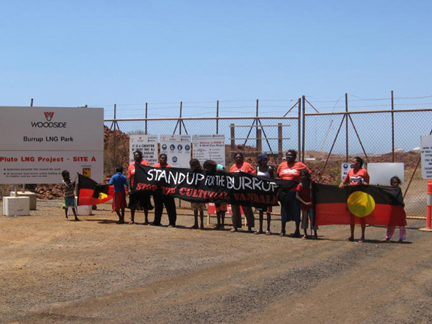 In the Black, aboriginal Western Australian homeland known as the Burrup Peninsula, part of the Dampier Archipelago, Chevron has been expanding its natural gas operations, just as Chevron is now expanding its oil refining operations in Richmond, one of the San Francisco Bay Area’s internal, largely Black colonies.

A Chevron-Shell alliance in Australia, which goes by the name of Woodside Petroleum, Inc., is fouling the air and desecrating the sacred Ice Age rock art of the Black aboriginal Australian Ngarlema and Wong-Goo-tt-oo peoples of Burrup Peninsula. 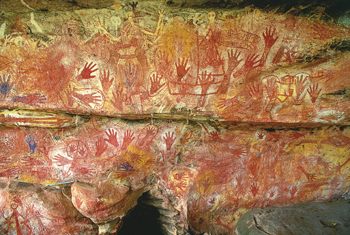 On the Australian Burrup Peninsula, the Black Australians in the “Stand Up for the Burrup” photograph shown here, like those in many “stand ups” held all around the world, continue to protest the Chevron-Shell alliance to produce liquefied natural gas (LNG) for export to the United States via the LNG terminals between Tijuana and Ensenada in Baja, California, and piped to “the state of California,” which the SFPUC will buy it from, to further foul the air in Bayview Hunters Point and at SFO.

And to bring this back home, let’s notice that activists including the Coastal Conservation Association, the Gulf Restoration Network, the Sierra Club and the Louisiana Boat Charter Association on the still suffering Gulf Coast stood up to Shell’s proposal for a liquefied natural gas terminal there, at Gulf Landing, 38 miles south of Cameron Parish, on the Louisiana Coast.

Can’t infinitely more prosperous and materially fortunate San Francisco, with its enormously greater financial resources and possibilities, do at least as well, environmentally, as the still suffering Gulf Coast?

Despite his vote for the notorious 2005 Energy Bill, he voted against the misnamed “Gulf Coast Protection Act,” which extended oil and natural gas rights into the Gulf of Mexico in 2006.

That oil and gas drilling extension bill was far too huge a disgrace for me to detail here, but here’s a paragraph from a Chicago Tribune article posted to Obama’s own senatorial website at the time:

“Obama voted against the bill and said the Republican leadership was being ‘dishonest’ by believing the nation’s energy problem could be solved with more drilling” (http://obama.senate.gov/news/060802-senate_oks_gulf/).

That Gulf Coast Protection Act earmarked some funds for “wetlands restoration” but quite rightly earned the opposition of not only Barack Obama, but also that of the Mississippi Sierra Club by earmarking funds for onshore infrastructure to further benefit the corporations whose drilling leases it extended in the Gulf – funds for more ports, pipelines and roads (http://tinyurl.com/4utelm).

And, as if that weren’t bad enough, the city government of New Orleans then all but immediately issued municipal bonds based on their anticipation of many more years of oil and natural gas tax revenue and promptly distributed the funds to some of the most notorious corporations still picking New Orleans’ bones, many of them likely to profit from the Gulf Coast Protection Act itself.

Thus, the Gulf Coast Protection Act further damaged the environment and endangered the survivors of New Orleans with more oil and natural gas drilling and pipelines, as it most likely will for years to come, and further indebted New Orleans survivors, also for yeas to come.

Can’t San Francisco, with so many Barack Obama enthusiasts on its Board of Supervisors, at least join Barack Obama in rejecting the lie that more drilling, even domestic drilling, for a non-renewable, extremely politically and environmentally hazardous energy resource will guarantee “energy security,” in San Francisco or anywhere?