A profile on a group of disabled musicians in the Congo 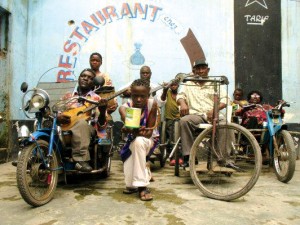 Poor News Network (PNN) – For the past seven years, filmmakers Renaud Barret and Florent de La Tullaye have been filming Staff Benda Bilili, a revolutionary and politically active Congolese band made up of disabled musicians.

“We didn’t choose [this story]. It was an emergency to us, for the beauty and the poetry of it … had to be told somehow,” said the French filmmakers, who have been filming movies and producing bands in Kinshasa since 2003.

Staff Benda Bilili, which means “beyond appearances” in Lingala, is a group of six disabled musicians with two kids they adopted from the streets. They describe their music as a mix of rumba, blues and tribal salsa and a way to share their experiences with poverty and disability in a country with few schools, roads or healthcare resources. They make their own guitars and wheelchairs and for the past 10 years have considered themselves the real journalists of the Congo.

“In our songs, we are the true press. We talk about street life, the street kids and their dreams of happiness; we talk about corruption … The press here is a slave to power. I consider myself a journalist whose duty it is to speak the truth,” said Coco, a co-founder and leader of the group.

“In Congo the media equals the government. It’s treated in a highly self-satisfied tone. Like they give a poor guy a bag of peanuts just before the election and make a whole ceremony about it,” he added.

In addition to flipping the notion of who is considered media, the group also believes that it is their duty to give shelter to any gifted artist of the street. “If our album is a success, we will build an art center of our own to teach music and other things to the street kids … If we don’t do anything for them, it is like a time bomb,” said co-founder Ricky.

Ricky and Coco met over 30 years ago in a care center for the disabled and began to jam together. Little by little they met other street musicians and created their orchestra. “When the country exploded in the late ‘90s, they managed to stay united and always playing music …

“They met the street kid Roger (who is now their soloist) at the Kinshasa central market in 2004 and decided to adopt him although at that time they were themselves living in the street,” said Barret.

Coco and Ricky consider all street kids Staff Benda Bilili kids. “There are thousands and thousands of them. Many come to Kinshasa to flee war in the east of Congo … The government arrests them, deports them and sometimes kills them,” they said.

Through their music, Staff Benda Bilili speaks to these kids. “The lyrics of their songs are like advice they give to all the people who live in the streets like them. They are like the godfathers of all the street kids and very respected personalities of the ghetto,” said Barret. “Their message to the people is all about survival.”

The group met filmmakers Barret and La Tullaye in 2004 and agreed to be filmed as a way to pass their message on to the world. During the seven years of filming there were tremendous ups and downs: The group lost everything in a fire, slept on the streets, musicians disappeared or died – things they call “everyday life in Kinshasa.”

In 2006, Staff Benda Bilili was asked by the U.N. to produce a song to incite people to vote in the first democratic elections. For their song “Let’s Vote,” which was played repeatedly on every radio station and television channel, they were given $300. Furious, the group has sued the U.N. for $100,000.

In 2009 the group will be going on tour for the first time ever to share their message and story of survival. “I have to share my experience, because I’m great, and God made me a rock star,” said Ricky.

Illin and Chilln is a column by Race and Disability Scholar Leroy Moore on race, disability and media that has been running on POORMagazine.org since 1999. In 2007 Moore launched another revolutionary media project, Krip-Hop, which features the work of musicians from all over the globe who are living and working with disabilities. This story is part of the Krip Hop series. Contact Moore at sfdamo@yahoo.com.