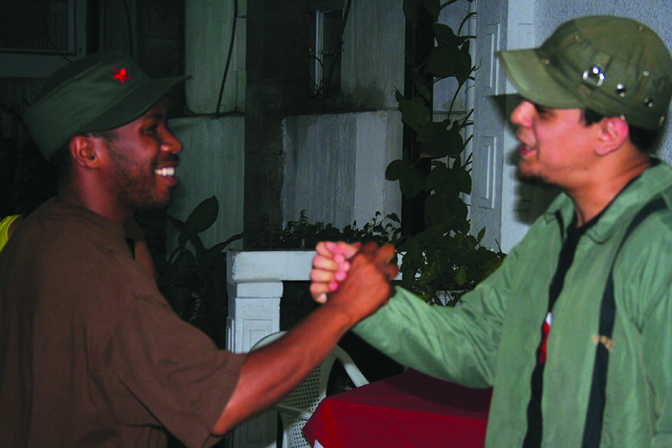 An interview with the producers of Radio Zurda, ‘The Voice of Free Youth’

The Prisoners of Conscience Committee delegation from the United States returned recently from a fact-finding mission in El Salvador. We were in three cities – San Salvador, Suchitoto and Sansonate – and we talked to former combatants, government officials, union leaders, community leaders, members of street organizations, former political prisoners and more.

One of my favorite groups that we met was Radio Zurda, a collective of youth who do a political radio show heard in El Salvador and Honduras, targeted towards a youth audience. We conducted this interview in a hotel after we witnessed a presentation where the Radio Zurda producers talked about their work politicizing an “apolitical” population of Salvadoran youth. 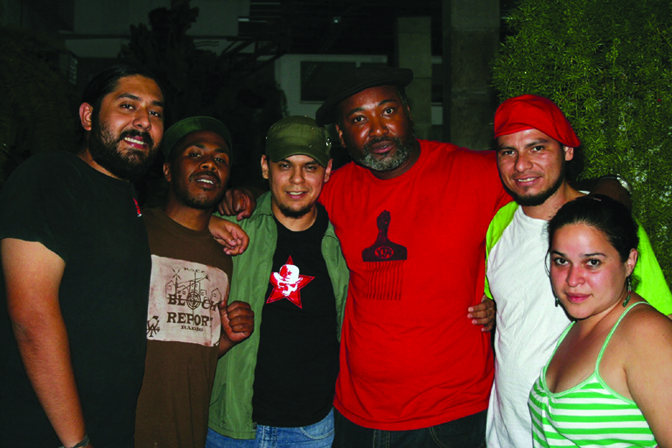 Radio Zurda’s radio shows are heard in El Salvador and Honduras and on the web. Although they claim no political affiliation, their show gives voice to the wide spectrum of organizations that are on the Salvadoran left. Check out this youth produced Spanish-speaking political radio show for youth based in El Salvador.

MOI JR: What is the purpose of Radio Zurda?

Radio Zurda: So our goal is to educate, inform and entertain youth to be able to break the media barriers and fortresses that they have. We try to break through that.

Radio Zurda: To start off with, we don’t lie. We say things and tell things the way that we see them, and the way that they really are. So besides the fact that we do not lie, what makes us different is that we are a form of media made by youth and for youth.

Also what makes us different as Radio Zurda is that we don’t respond to any capital interest – in fact, we are anti-capitalist – and we don’t accept any form of oppression nor invasion, and we will never defend that. So in any form of invasion, we are against any colonizing imperialist action and position of the powerful over the weak, and that is where we are right now, as a weaker force.

MOI JR: What role does Radio Zurda play in the revolutionary movement? I just heard from you on the panel, where all of you just spoke, and you talked about your role in the progressive, revolutionary left movement. How do you see yourselves contributing to revolutionary change in El Salvador? 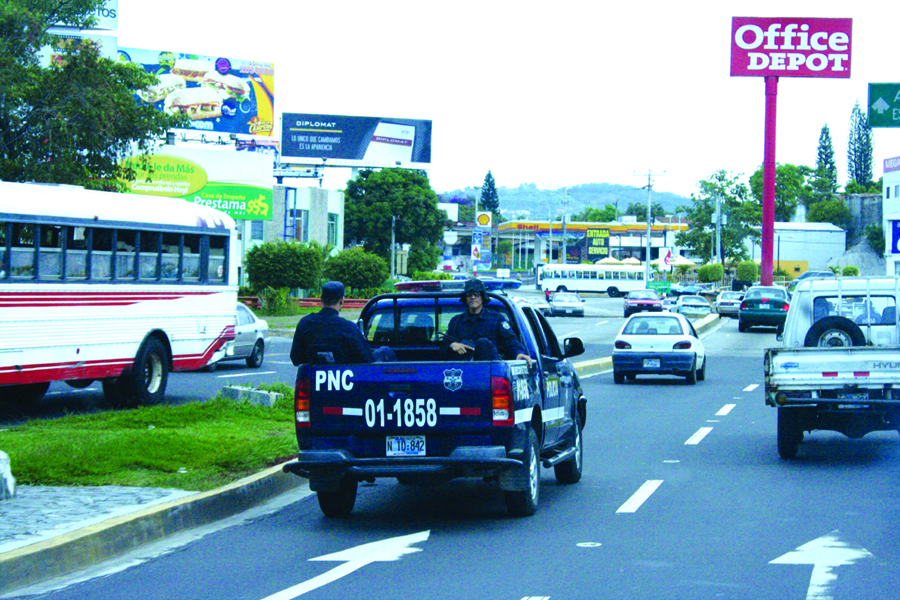 Radio Zurda: To answer that, there are three main words: inform, educate and entertain. And that is part of what makes Radio Zurda unique, say, within the left of El Salvador – this is not done; our method is not applied. And so that in itself is what makes our work important, and that is what makes Radio Zurda a part of the revolutionary process in El Salvador. And also what contributes to that is, as Julio said, no one else does this for youth and by youth.

MOI JR: During the presentation you talked about reaching young people and how the young people of El Salvador were apolitical. What is your assessment on why they are apolitical? As well as how do you reach apolitical youth with a political radio show?

Radio Zurda: Okay, basically the way that we do that is by not going into saying what is politics, but what we say from our perspective. Because we are youth, we are able to understand and know what are the needs of youth and what are the interests of youth, so that we could go first and set those ideas, instead of going straight into saying what is politics. We first sort of spread that idea out, create that analysis, in the language that youth speak.

The important question is to ask why are youth apolitical in our country. And so what happens is that we live in an era that is quite advanced technologically, and that is what permits or allows there to be a variety of distractions for youth. And so you got to think, what is more interesting for the average person, for the average youth? Is it to have a political discussion or to be on chat (instant messaging) with, say, an interest of theirs?

Another question is for the majority of youth: Is it more attractive to maybe go out for a drink or to party or to be sitting discussing a document or identifying a document that you can later discuss? So all these factors of distraction is what really makes youth not want to be interested or want to get involved in politics.

And it is also the evil role that the right wing here has had in enforcing that. And so that is why the youth and, in general, the population does not believe in that right-wing politics here. And so then the conclusion is, “I as a young person don’t believe in that political system. So I don’t get involved.”

The question is how do you make those youth become interested in the context of globalization, to have them get involved. So, say, on such topics as how an increase in bus fare affects you, instead of that you’re thinking of the latest artist in Hollywood or some soccer team in Europe.

So then that is our basic challenge, to have youth be able to identify whose fault it is that you are living a shitty life – who you can make responsible for that – and then you identify who you have to struggle against. So then that basically explains why in all of this Western Hemisphere there are traditions and customs or social behavior that are influenced or dictated by those who fabricate the same movies that show up in Hollywood, so people end up thinking that their reality is the same as what they see on the big screen.

MOI JR: Right before we came to El Salvador, we saw a movie on La Mara Salvatrucha. In the movie they tried to paint Salvatrucha as agents of the Salvadoran government. Within our organization we don’t call street organizations gangs; we call them street tribes that are un-politicized. Our position is that the organized body is not what the problem is; it is what they are involved in. We take the position that either the people organize the street organizations to a point of unity, or the government will. How do you see the issue?

The fact that they are organized is exclusively the product of the inequalities created by capitalism. This phenomenon of gangs is a result of capitalism, and it comes from and also benefits those that impose that. The ones that impose capitalism benefit from having these gangs as well.

So the one thing to have very clear is that capitalism excludes. It is a form of exclusion. So basically if it is exclusion, exclusion creates crime. And for us in our country, the governing party, ARENA – crime is of benefit to them. They profit from it.

So in our country what happens is that a lot of former military are owners, including the same candidate that the ARENA Party has put forward for the upcoming elections: He’s the owner of private security.

We have to understand that in our country, there are more private security agents than actual national police. So basically it is not in the interest of our government to solve crime, as they profit from it. Nor are they interested in including members of gangs into society as they profit from that. They do not suffer the consequences of the crime and violence that happens here.

So basically those that are in gangs, organized in the streets, are mainly youth, and youth are our audience. So for us it is important, even though they are not politicized, they can become politicized through our message, through our work.

MOI JR: Last but not least, can you guys talk about who are some of the guests that appear on your show? And what is the importance of the different kinds of guests that you bring on the show?

As we are wrapping up, as Radio Zurda, we would like to send a fraternal solidarity shout out to the Black Panther Party as well as the Prisoners of Conscience Committee. It is quite a pleasure and honor for us to be here with you.

MOI JR: I have just one more question. The Salvadorans that I know that live in the United States wanted to know political youths’ view on mass deportation of Salvadoran people, particularly youth that they claim are in street organizations, back to El Salvador. What do you guys think about that? And two, do you think that with these mass deportations that Amerikkka is trying to deport the capitalist mind-state at the same time?

Radio Zurda: Basically, it is part of their business, it is of profit to them, and it is part of their strategy. Here on a daily basis, there is an expulsion of Salvadorans towards the United States, because basically it is through remittances that this country sustains – not just at the family level but at the macro level.

And maybe, yes, the deportations may fall under that idea of implanting, of imposing the capitalist system here, and we actually do see how these deportations are contributing, are influencing the building of even more gangs here. We have seen that influence already.

Basically then, yes, it can be a form of importing here, the capitalist system, but I also wanted to comment on this so-called Amerikkkan dream that has been killed. It has been killed already here, but it still exists ‘cause there is no other option for youth. You know, no option – like they don’t offer anything for the economic, emotional or intellectual development of youth, so basically then to migrate is the only option presented to youth.

Basically, this whole dynamic as well further promotes corruption in our country, and them exporting that capitalist mentality, that mind frame, is also what keeps our system here. And yes, it is basically the only option offered to youth, so there is not much opportunity for growth.

A shout out to all the youth that are listening to this very interesting interview. There is always something to say, but a lot more to listen to or to hear. Shout out to all of the oppressed people that live in the United States, particularly our Latino, Chicano, Salvadoran, Central American people of color: Fuck whitey (laughing)! If everyone spoke English, they would say, Yankee go home!