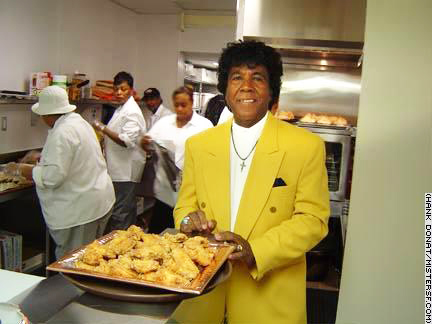 In an effort to help reverse the decline of San Francisco’s African-American population by recognizing its unique cultural and artistic identity, the Board of Supervisors has approved a resolution urging the Department of Public Works to rename Eddy Street between Laguna and Divisadero to Marcus Garvey Way as well as proclaim Aug. 17 Marcus Garvey Day in San Francisco. The resolution was unanimously approved on Nov. 26, 2007.

Daniel Landry, a long-time Fillmore resident and community activist, has been involved at every step. “When Gavin Newsom announced that the City was concerned about the Black population declining and about finding ways of attracting Black people back to San Francisco, a thought came into my head,” said Landry. “The way to do that, first of all, is to start putting together images and cultural symbols that will attract people back.”

This has been happening to a certain degree. Spend any time at all in the Fillmore these days and it isn’t long before images of a bygone jazz age meet your eye – Billie Holiday wailing a blue note and posters proclaiming “Heritage on Fillmore.” However, these images are indelibly linked to the new Yoshi’s, which eats up a huge chunk of real estate at the corner Fillmore and Eddy Streets. The past has been dug up for profit and one has to wonder to what degree this new development will in fact benefit the local community.

The choice of Marcus Garvey as a symbol, however, serves a different purpose. Landry said the idea is to “touch a nerve of those who remember the Black Renaissance out of Harlem, New York, which of course was in sync with the Marcus Garvey movement in the early 1900s. I think it’s time that we start bringing back all of the principles that he stood for, which were basically self-sufficiency, cooperation among people, ownership, self-pride, self-love, as well as a strong nation.”

In fact, the street renaming also serves as an anchor project for the area. “We have ideas of a Marcus Garvey Boys’ School and a Marcus Garvey Educational Center where people can go and study,” said Landry. “We can reclaim this area back and it makes sense to me that if you’re going to have the Fillmore Heritage Center, is to have a street named after someone that people can not only remember, but they can get it instantly when they hear the honorable Marcus Garvey Way.”

Supervisor Ross Mirkarimi and his office helped in the formulation of the resolution. “The process for a street name change is generally long and arduous,” said Mirkarimi by e-mail. “Whether it’s one block or more, designating a street tribute to Marcus Garvey is fitting for San Francisco and a community that struggles to just remain and grow.”

There has been some opposition, however. In a letter to the mayor and the Board of Supervisors, several Fillmore residents expressed their dismay with the plan, saying that there has been insufficient community input, that Ross Mirkarimi has essentially fast-tracked the proposal and that it will cost between $100,000 and $1,000,000 for the renaming, among other things.

A rally and press conference to publicly announce the street renaming will be held on Saturday, Feb. 2, 12 p.m., at 1600 Eddy St., the corner of Steiner and Eddy. Guest speakers include Erris Edgerly, director of Brothers for Change, Daniel Landry, a Brothers for Change member, and District 5 Supervisor Ross Mirkarimi. For more information, call (415) 573-7691.

You can support the renaming of Eddy Street to Marcus Garvey Way by sending a letter to the Department of Works, 1 Dr. Goodlett Place, City Hall Room 348, San Francisco, CA 94102.