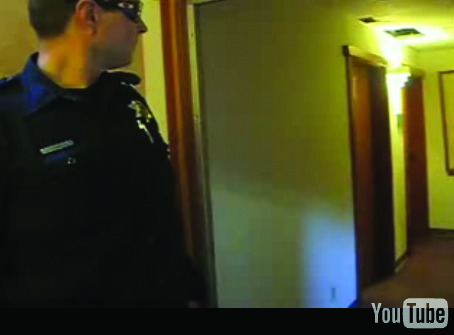 Introduction by Kiilu Nyasha: Before I left KPFA as a regular programmer in 1995, I worked with Akilah. She was an exceptionally talented engineer and mixer; her mix for Black August ‘93 of Bato Talamantez’ poem in tribute to Hugo Pinell was sheer genius. I remember feeling very powerless when she called and told me about this incident. What should be kept in mind on reading her account of the brutal humiliation she suffered is the glaring fact that Akilah is tiny. I mean she’s perhaps 5 feet tall more or less and no more than 100 pounds soaking wet! Akilah is a beautiful person and I love and respect her. The Woman Dread, Akilah’s radio pseudonym and raggae show, should have become an institution at KPFA, as was the case with Johnny Otis, etc. But then, she’s a Black woman, huh. – KN

As I read the post about what happened to Nadra Foster, I broke out in a cold sweat and my heart started to beat faster and faster. I experienced painful flashbacks as this red hot feeling came over me from head to toe, skin to bone. Then, after listening to the audio, I felt that burn of tears welling up in my eyes. I knew this would happen again. I told folks it would happen again. And sadly, tragically, it has come to pass.

When I was removed from KPFA in handcuffs by five of Berkeley’s finest pigs and summarily banned from the station – after more than a decade – I tried to tell folks of the reality of KPFA’s racist hypocrisy, instead of the myth of their benevolent liberalism. Well, after reading the details of the recent incident in which a pregnant Black woman was beaten inside the walls of KPFA, I just have one question: Can you hear me now?

My case, sadly, was not the first case where a Black woman was sorely mistreated by KPFA. And my case was not the same as Nadra’s. I don’t know, can’t know, the fullness of what happened because I wasn’t there, nor have I personally spoken to Nadra. But I am intimately familiar with KPFA’s methods. For me, it is of equal concern what caused this outrageous incident as the incident itself and the barbaric manner in which it was handled, because KPFA always seems to have a hidden agenda, an ulterior motive, for what they do … especially where Black women are concerned.

I condemn KPFA in the strongest terms. In what universe do they exist where it is all right to cause this to happen to anyone, especially one who has consistently demonstrated an unyielding and forthright commitment to them as well as the community. Nadra is an apprentice alumni, as am I. And KPFA takes folks through an intense and extensive screening process in order to enter the apprenticeship program. It is simply unjust that a person who exhibits the type of attitude and level of integrity that would afford them not only acceptance in, but also completion of, that program – not to mention working in the station – would not be given, at the very least, the benefit of the doubt before having the goon squad called on them to deal with what is an internal KPFA matter.

What makes this even more outrageous is that KPFA is well aware that the Berkeley pigs – like most pigs – are infamous for gearing up to inflict unjustified assaults. As a matter of fact, as pigs, they generally get highly upset if they can’t mess somebody up when they come out. I am not surprised by what they did. They are, after all, pigs. It is their job.

But, as if there was no other option in this case, it was KPFA who chose to call these legal gang members. It is fundamentally hypocritical as well as pitifully ironic that the staff of KPFA, who demonstrated against the unnecessary brutality and false arrests that they themselves experienced at the hands of the pigs of Berkeley when the station was closed down several years ago, would subject Nadra to significantly more than the possibility that the same – or worse – could happen to her.

As I said, my case was not exactly like Nadra’s, though there are numerous similarities. I am, by nature, and was all during my time at KPFA, nothing but kind to every single person I knew or worked with. And even those I didn’t particularly like, I treated with respect, demonstrating that “we’re all in this together even though we may disagree” community radio station attitude that was so instilled in members of the apprenticeship program. And I bought into it hook, line and sinker.

I personally and consistently witnessed that same principled discipline in Nadra as a graduate of the apprenticeship program. That principle, as a matter of fact, was a prerequisite for being an apprentice. Even though Nadra may not have signed a contract to that effect, as I did, we have both proven that our word is bond. It is contained within the content of our character to respectfully co-exist.

Not only that, Nadra is one of the most spiritual, peaceful and gentle sisters I have ever met. I have never heard her use a single swear word, let alone aggress against anyone. This is why I can state without doubt or hesitation that when it comes to Nadra, there was no need for KPFA to have called the pigs on her, and no provocation for them to have done what they did. In Nadra’s case, as well as mine, the same thing applies – all we was doin’ was defendin’.

In my case, despite an extensive paper trail documenting numerous incidents, pleading and warning what could happened if the particular situation was not handled by management, KPFA elected to ignore it, allowed the matter to not only fester, but escalate, until it ultimately played out violently, resulting in me being, first, physically assaulted by another KPFA staff member, then physically removed by Berkeley’s finest pigs. I wasn’t arrested, though. The pigs simply paraded me around outside the station – handcuffed, fighting to breathe, doubled over in pain and bruised by the assailant – for all to see. As I struggled, laboring to explain that I could not breathe, they threatened to take me to Herrick Hospital on a 5150 (crazy person). They wanted to make an example out of me. And it worked, too, because no one had the balls to help a sistah out. I was left lying on the sidewalk.

If KPFA management would have handled the matter in the first place, the incident never would have happened in the second place. They more than allowed it; they instigated it. And when it did happen, there were other options than calling the police. I am not a violent person, regardless of the character assassination campaign KPFA ran on me. They tried to make me out as crazy when, in truth, I was the victim of a violent person.

In truth, I don’t mess with nobody that don’t mess with me first. It’s called self-defense. Yet, I was the one banned without a hearing. KPFA had a duty to investigate the incident. They didn’t do it. They had a duty to provide me a grievance procedure as guaranteed in their bylaws. They didn’t do it. And the offending party – the man who put his hands on me in the first place – was protected by KPFA and still remains there to this day. Hmmm … The violent initiator remains while the victim is punished. What’s up with that?

There is so much about my case that folks just don’t know. People walk up to me all the time – eight years later – and ask me what happened. And when I tell them, they can hardly believe that that’s what goes on at “the people’s station.” What’s not to believe? What happened to me had everything to do with the fact that I, along with some others, created BJR – Blacks for Justice in Radio – for the specific purpose of addressing reparations for Black folks at KPFA and to have a say in hiring, programming and policy. Again, KPFA always has an ulterior motive, always.

What now? Well, if KPFA is running true to form, even though Nadra has done nothing but demonstrate exemplary community service for over a decade – same as me – she will probably now be accused of being a threat to the safety of those at KPFA – same as me. I was continually referred to (as well as treated like) a “psychotic Black bitch” by other KPFA staffers. Even though all Nadra was doing was defending herself, she will probably be blamed as the initiator – same as me. Then, through their corporate attorneys, KPFA might file all the necessary paperwork to have an injunction placed on Nadra, resulting in her being banned from the station, probably for life and probably without a hearing – same as me. As I said, I am more than familiar with their methods. Nadra can count on the fact that those folks at KPFA will lie, not only at the drop of a hat, but well. They will produce witnesses that were not even there who will swear out false statements against her – same as me. It is my experience that they will do damn near anything to justify their actions and objectives … even orchestrate a beat down.

There are two major differences between Nadra’s situation and mine, for which I am truly happy: Her incident is being exposed, and she is getting support. No one was there for me. No one. Not Black, white, male or female, legal or layman. And as outrageous as it was, I hope that her incident will finally bring to light those nasty issues long hidden inside the bowels of KPFA that they don’t want known. Their dirty laundry is long overdue for a washing because it stinks in the nostrils of decent people.