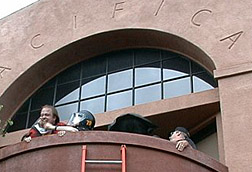 On Wednesday, Aug. 20, 2008, between 1 and 2 p.m., Nadra Foster, a young Black woman programmer and single mother, was beaten to the ground by the Berkeley police, arrested, hog-tied and taken to jail, after the management of KPFA radio and the Pacifica Foundation had called the police on her, falsely accusing her of being “banned” from the station.

The incident started when Nadra, a graduate of the KPFA apprenticeship program who hosted the program Elemental Roots for several years at KPFA and regularly works with other programmers, came to the radio station to work on the KPFA jazz radio show Transitions on Traditions. She was working in the studio called Ujima, which means collective work and responsibility in Swahili – a studio that signifies racial justice. Michael Yoshida, KPFA’s chief engineer and a member of KPFA’s management team, had personally let her into that studio the previous Friday.

Vini Beacham, a member of the paid staff, contacted Lois Withers, the KPFA business manager, aka accountant, telling her that Nadra was in the building using station resources for her personal benefit. Lois, another member of KPFA’s management team, contacted Michael Yoshida to escort her while she kicked Nadra out of the station.

When the two arrived at the door of Ujima, Nadra stated that she refused to leave because Lois does not have the power to kick her out. According to Yoshida, Lois called Dominga Estrada, the human resources director of the Pacifica Foundation – which is in charge of the Pacifica network of five major radio stations and dozens of affiliate stations around the country – to ask how to deal with the situation. Dominga authorized Lois to call the police.

According to what Nadra told me, Lois told the police that she was the general manager of the station and that Nadra was a fired employee who refused to leave. In reality, Lois is the business manager and Nadra is a volunteer at the station and a member of the Unpaid Staff Organization.

Two male police officers slammed Nadra to the ground, kneeing her in the groin in the process, as well as severely spraining her arm. A number of KPFA broadcasters saw what happened, including Anita Johnson of Hard Knock Radio, who was in tears pleading with the management and other people at the station to get involved and help Nadra, to no avail.

Weyland Southon of Hard Knock Radio taped Nadra’s chilling screams as the police were slamming her to the ground and twisting her arm. He also taped Nicole Sawaya, the executive director of the Pacifica Foundation, slapping his camera out of his hand on the scene. (Watch Weyland’s video at www.blockreportradio.com.)

Interim Program Director Sasha Lilley was also an eyewitness to this act of management-initiated police terrorism, yet did nothing in defense of Nadra’s human rights. Initially charged with several felonies, her bail set at $81,500, Nadra spent two days in jail and is now facing five misdemeanors, including trespassing, two assault on a police officer charges and two charges of resisting arrest.

The Prisoners of Conscience Committee, along with the Malcolm X Grassroots Movement, the Black New World and producers from the Voices of the Middle East radio show are organizing in the Black and Brown communities of the Bay Area and throughout the media to expose this grave injustice.

A town hall meeting is planned for Sunday, Sept. 7, at the Black New World – at 836 Pine St., West Oakland, at 3 p.m. – so that the community can have an opportunity to get the facts about what happened to Nadra Foster and the current status of her case and a glimpse into the shady workings of the corrupt administration running KPFA currently.

We invite everyone to express themselves about this outrageous act of police terrorism in our community and get involved in organizing to get the charges against Nadra Foster dropped, get KPFA to pay all medical and legal bills, demand that they acknowledge that they didn’t follow any due process or protocol as laid out in the handbook in relation to “banning” somebody, demand that the Unpaid Staff Organization be reinstated and a transparent grievance process be established, among other things.

People should also start to think about organizing to get this interim administration at KPFA removed from power and a Black public affairs show broadcast during prime time on the airwaves of KPFA that talks about the affairs of Black people in this country. Consider that KPFA and the broader Pacifica network of radio stations uses Black voices like James Baldwin, Paul Robeson, Malcolm X, Martin Luther King and the Black Panthers to raise money, but the reality is if these people were alive today they would not have a show on the KPFA airwaves that is dedicated to the people they were organizing. Although most people would expect KPFA to have done this decades ago during the Civil Rights Movement, still today no such program exists on the KPFA schedule.

After the Block Report broke this story on KPFA’s Flashpoints on Thursday, Aug. 21, and followed it up with Block Report coverage on Friday, Aug. 22 – listen at www.kpfa.org/archives/index.php?show=9 – Interim Program Director Sasha Lilley, Lois Withers and Vini Beacham went on vacation for two weeks. On Aug. 22, KPFA Interim General Manager Lemlem Rijio issued a statement on the incident. It reads in part, “It is important for you to know that the Berkeley Police acted independent of direction from KPFA.”

Considering that Rijio is an African woman, can you believe that she or any Black person who is connected to the Black community would call the police thinking that after the police arrive she can control their actions? This incident and the writing of the press release exemplifies the incompetence of this current KPFA administration led by Lemlem Rijio, as well as that of the current Pacifica administration led by Nicole Sawaya.

Aileen Alfandary, the white news director of KPFA, told me personally that what happened to Nadra was not newsworthy, and that is why KPFA News did not cover the issue on Thursday. The disabled white executive producer of the KPFA Morning Show, Mitch Jeserich, also told me on Thursday, a day after the tragic incident, that it was not newsworthy. And Andrea Ali, the manager of Guerrilla Cafe, told me, when asked if we could have a community meeting there regarding the incident, that she was on a spiritual quest and did not want to deal with KPFA’s negativity at Guerrilla Cafe.

If you did not get a chance to hear the audio accounts from people who eyewitnessed the police terrorism inflicted on Nadra Foster, you could go to www.blockreportradio.com to stay updated on the community organizing surrounding this topic.

Editor’s note: The Aug. 20 brutalizing of longtime KPFA programmer Nadra Foster by police who were called to KPFA by station and network management has the Black community and all justice seekers seething. How could managers, including two Black women, of the radio station that proudly considers itself the most progressive in Northern California not know the dangers of calling the police on a young Black person? As KPFA programmer Weyland Southon exclaimed on the Block Report that broke the story on Flashpoints the next day, “Situations like this get us killed.”

Rumors that Nadra had been “banned” because a white programmer said she felt “threatened” by this young Black woman who’d been trained at KPFA and has worked there as unpaid staff for over a decade are not unprecedented. Other young Blacks in recent years have been banned and locked out of KPFA merely because white programmers complained they felt threatened by the young people’s presence. Racism runs deep at KPFA.

Reparations must include revising KPFA’s program schedule to include a prime time public affairs show covering African American news and views. News from the Black community inevitably features police terrorism because it is perpetrated every day in every hood in the U.S. That’s the “War at Home” – hidden in plain sight because powerful media, including KPFA with its 59,000 watts reaching a third of California, refuse to recognize and report on it.

The fact that the San Francisco Bay View National Black Newspaper, which does report the news from Black communities across the country, is not currently in print makes coverage of that news by KPFA imperative. KPFA’s signal reaches most of the 100,000 people who used to read the printed Bay View every week – the majority unable to read it on the web because they can’t afford internet access or are locked behind enemy lines.

The journalist best known for his coverage of police terrorism and other life and death Black news is POCC Minister of Information and Bay View Associate Editor JR, who broke the story of the attack on his colleague at KPFA, Nadra Foster.