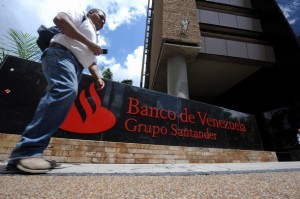 He added: “Months ago I received the information through intelligence sources that Banco de Venezuela, which had been privatized for years, was being sold by its Spanish owners; that an agreement had been signed between Grupo Santander and a Venezuelan private banker. Then the Venezuelan banker needed the permission of the government to buy a bank. This is not a small operation …

“And then I sent a message to the Spanish and the Venezuelan banker, to tell them that the government wanted to buy the bank; we want to recover it. Then the owners said. ‘No, we don’t want to sell it.’ So now I say, ‘No, I will buy it. How much is it? We are going to pay for it, and we are going to nationalize Banco de Venezuela.'”

The president continued: “From this moment the media campaign on the part of the Spanish and international media is going to start. They are going to say that Chávez is an autocrat, that Chávez is a tyrant. I don’t care; we are going to nationalize the bank regardless.” “Ladran, luego cabalgamos” (“The dogs bark; therefore the caravan is moving”), he said, quoting from “El Quijote.”

“We need a bank of that size. Because this is the Banco de Venezuela. But this bank generates massive profits, but these profits are going abroad.”

Chávez also assured that the savings of the account holders were going to be guaranteed as well as the jobs of the workers, whose conditions would improve “as has happened with the nationalization of SIDOR.”

Chávez thanked the private managers of the bank for having turned it into a very efficient institution, but added that the bank would cease to be a capitalist bank to turn into a socialist one: “Profits will not go to one private group. They will be invested in socialist social development. Socialism is stronger every day that passes!”

Banco de Venezuela is one of the most important banks in Venezuela, with a 12 percent share of the market in loans and obtained profits of US$170 million in the first half of 2008, a 29 percent increase on 2007, when its profits had already increased by 20 percent. It has 285 offices and 3 million customers.

Banco de Venezuela was nationalized in 1994 after a massive banking crisis which bankrupted 60 percent of the banking sector, only to be privatized in 1996 and bought by the Spanish multinational banking group Grupo Santander for only US$300 million. In only nine months Grupo Santander recovered its original investment. The bank’s assets are now estimated at $891 million. In 2007 alone it made $325.3 million in profits, which is more than what they paid for the bank in the first place.

The Spanish Grupo Santander is now Latin America’s largest banking concern with 4,500 branches and it drew one third of its profits in 2007 from the region. This is just one example of how big foreign multinationals are plundering the resources of the continent.

The attempt of the Venezuelan government to regain control over the resources of the country is entirely justified. Yet it has been met by howls of protests from the multinationals. “It’s looking like a negative development. I don’t see why the banking sector needs to be under the purview of the public sector,” said Alberto Ramos, a senior economist with Goldman Sachs. “The private sector does a much more efficient job of running that type of business.”

This is an excellent example of the lying hypocrisy of the defenders of big business. How can these gentlemen speak of the so-called efficiency of the private bankers when everybody knows that the big banks in the USA and other countries have been engaged in massive and criminal speculation for decades, which has led to the collapse of one big bank after another in the last 12 months, threatening the entire world financial system with collapse?

Not long ago, the Federal Reserve Bank of New York was forced to hand over US$29 billion to the Bear Stearns Companies Inc., a major investment bank in the USA, to facilitate its purchase by another big bank, JP Morgan Chase & Co. This is a perfect example of the “efficiency” of the private bankers, who have made fabulous profits from criminal speculation for years in the U.S. housing market, and now run cap in hand to the state to bail them out with billions of dollars of taxpayers’ money. Instead of going to jail for their crimes, which caused 77,000 American families to be evicted from their homes in the month of May alone, these wealthy parasites are richly rewarded by their friends in the White House and Wall Street.

When President Chávez announces the nationalization of a bank, he is accused of committing a crime against private property. But bourgeois governments in the USA and Europe have been nationalizing banks themselves. The Federal Reserve, having already poured money into the pockets of the bankers in the Bear Stearns affair, has now in effect nationalized the two huge mortgage giants Fannie Mae and Freddie Mac at a cost to U.S. taxpayers of a further $25 billion.

George Bush and his administration have no money for health or pensions, but plenty of money to put in the pockets of their rich friends. In the words of the celebrated American writer Gore Vidal, it is a case of “socialism for the rich and free enterprise for the poor.”

Their involvement in massive swindling and speculation posed a serious threat to the stability of the global economy. That is why the U.S. authorities were forced in effect to nationalize them. Yet nobody raises any questions about this.

We saw exactly the same thing last year in Britain, where the fifth biggest bank, Northern Rock, was nationalized by the government to stop it from collapsing. These private bankers were so efficient that they caused the first run on a bank in Britain for over 150 years, with long queues of worried savers waiting all night to withdraw their money.

The nationalization of Northern Rock cost the British taxpayer £20 billion (US$40 billion). At the same time, Prime Minister Gordon Brown tells the British workers that there is no money for wage increases and everyone must make sacrifices – everyone except the private bankers!

The workers of Venezuela and the whole world will welcome the nationalization of the Banco de Venezuela. They will understand that the attacks and calumnies against Hugo Chávez are dictated by hypocrisy, greed and hatred of the Venezuelan revolution. The Spanish bankers, who have been shamelessly plundering Venezuela, were quite prepared to sell the Banco de Venezuela to a private Venezuelan banker, that is, a companion in crime, but they were not prepared to allow the bank to be taken over by the state and used to further the interests of the Venezuelan people.

For Marxists, the question of compensation in itself is not a question of principle. Long ago, Marx advocated paying compensation to the British capitalists as a means of minimizing their resistance to nationalization and Trotsky raised a similar possibility in relation to the USA.

However, the idea of the reformists that the capitalists’ property must be bought at market values is entirely false and impossible in practice. Our policy should be minimum compensation in cases of proven need only.

In other words, we would consider compensation for middle class small shareholders, old age pensioners etc., but not lavish sums for the super-rich who have already made vast fortunes out of the plunder of countries like Venezuela. The Grupo Santander bought the Banco de Venezuela at the ridiculously cheap price of US$300 million. This sum of money has been paid for many times over. There is no justification for paying them a single Bolivar more.

However, the real issue here is not the amount of compensation. It is the fact that a big bank is being taken out of private hands. What the capitalists and imperialists really fear is that the tendency of the Venezuelan revolution to make inroads into private property will become irresistible.

The crisis of capitalism means that an increasing number of banks and other private enterprises will enter into crisis and close in the next months, causing a sharp rise in unemployment. Already, private investment in Venezuela has plunged. The Venezuelan economy is only being maintained by state investment and the public sector. This poses a serious threat to the revolution and can adversely affect the results of the November elections, especially if one takes into account the high and rising rate of inflation.

Instead of throwing money at private capitalists who will immediately send it out of the country to bank accounts in Miami, the state should take the productive forces into its hands and use its resources to create a genuine socialist planned economy. The prior condition for this is that the productive forces should be in the hands of the state, and the state should be in the hands of the working people.

Despite all the exhortations, the private capitalists will not invest in Venezuela. The only way forward is nationalization. The expropriation of SIDOR earlier this year was the result of the movement of the workers from below.

The threat of factory closures in the next few months will undoubtedly lead to a new wave of factory occupations and demands for nationalization. The nationalization of the Banco de Venezuela will give a further impetus to the workers’ demand for expropriation and workers’ control. Appetite comes with eating! That is why the owners of the Banco de Santander wished at all costs to avoid their property passing into the hands of the state, even though the president offered to pay for it.

In the television program in which President Chávez announced the nationalization of the Banco de Venezuela, he mentioned Marx and Lenin and referred to the importance of reducing the working week, as well as analyzing the world crisis of capitalism. He said that only with socialism can societies achieve their emancipation. That is absolutely true. But socialism is only possible when the working class takes power into its hands, expropriates the bankers, landlords and capitalists and begins to run society on socialist lines.

The Venezuelan revolution has begun to take measures against private property. Marxists welcome every step in the direction of nationalization. At the same time, we point out that partial nationalizations are not sufficient to solve the fundamental problems of the Venezuelan economy.

The nationalization of the entire banking and financial sector is a necessary condition for establishing a socialist planned economy, along with the nationalization of the land and all big private firms, under workers’ control and management. This would enable us to mobilize the entire productive resources of Venezuela to solve the most pressing problems of the people.

We therefore welcome the nationalization of the Banco de Venezuela as a step forward. But the main objective has not been yet attained: the elimination of the economic power of the oligarchy and the establishment of a real socialist workers’ state. The battle continues.

This story originally appeared at the British-based website, In Defence of Marxism, www.marxist.com. Alan Woods, who lives in Barcelona, Spain, is its editor and the chairman of the International Marxist Tendency. He can be reached through the website.