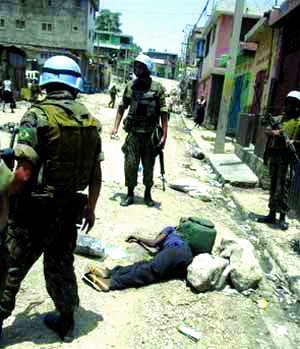 “President da Silva, according to a U.N. after-action report, your soldiers spent seven hours shooting at an unarmed population. They expended over 22,000 rounds of ammunition, knowing they were striking unintended targets. This cannot possibly be the best that the Brazilian people have to offer. How can this happen when you are the President of Brazil?

“Dr. Martin Luther King Jr. reminded us that there comes a time when silence is betrayal. Will you and your administration remain silent on these atrocities?” – David Josue’s letter to Brazilian President Lula da Silva presented at the Segundo Encuentro (Second Continental Conference Against Free Trade, Privatizations and War) in Mexico City April 5, 2008 (Read the full letter at www.sfbayview.com.)

HLLN (Haitian Lawyers’ Leadership Network) delegate David Josue addressed the Brazilian Parliament yesterday, Aug. 20, on the U.N. troops led by Brazil and their violation, disregard and almost depraved indifference to Haitian life, liberty and civil and human rights. Cases were presented: the 22,000 U.N. bullets on July 6, 2006, blasted into Site Soley’s civilian population, the numerous atrocities, abuses of power and human rights violations of Haitian civilians and the U.N. troops’ total indifference to the disappearance of human rights activist Lovinsky Pierre Antoine, amongst other cases. We demanded the withdrawal of the U.N. troops led by Brazil out of Haiti.

Our delegate gave his speech at the Brazilian Legislative Palace to standing ovations. He also presented the case against the U.N. soldiers’ atrocities, with images, to 10 Brazilian senators on the Federal Senate Committee on Foreign Relations and National Defense. His presentation received prime time coverage in Brazil on their equivalent of C-SPAN.

David Josue met and gave interviews with scores of Brazilian congressmen and senators regarding Haiti. We are informed that approximately 600 Brazilian delegates signed the resolution demanding a start to the withdrawal of U.N. troops from Haiti.

It seems the Brazilian press has been covering this story closely since Monday morning, showing on all major TV stations clips from Kevin Pina’s DVD of U.N. atrocities which David brought along and broadcasting his various interviews given on the matter.

We don’t have full details yet and need further written confirmation, but it appears due to these efforts that the Brazilian Senate has ordered the ministers of justice, defense and foreign relations and the Brazilian general in Haiti to appear before the Brazilian Senate to answer for their leadership and account for the dead Haitian bodies, the slaughters of civilians and what’s been done about the disappearance of Lovinsky Pierre Antoine.

Our information indicates that neither the Brazilian people nor Parliament had been informed of these allegations of abuse, repression and terror being committed daily in Haiti upon the civilian population by the U.N. troops led by Brazil. Apparently such information had been purposely withheld from the senators by Lula’s government and the Brazilian generals.

Generally, it seems, the Brazilians appear to have been under the impression the U.N. and Brazilian troops were in Haiti helping with structural development, engineering and such reconstruction work. They had little information on the particular and massive abuses committed by the U.N. troops since 2004, no idea of the tyrannical role of the U.N. troops led by the Brazilians in Haiti.

HLLN sincerely hopes this will be a turning point, a breakthrough to tell the truth about the repugnant U.N. soldiers’ role in Haiti and the fervent desire of Haitians for sovereignty and withdrawal of the abusive U.N. troops from Haiti. Finally the voice of the U.N. survivors of injustices will begin to be heard and some justice won for these Haitian victims of the U.N. soldiers.

More on David Josue’s trip to Brazil from Alan Benjamin

One of the reasons for David Josue’s week-long tour to Brazil is to convince President Lula to reply to the open letter Josue presented in Mexico City; he must commit to withdrawing Brazilian troops from Haiti!

On Thursday, Aug. 21, Brother Josue will travel to Recife in the northern state of Pernambuco, where he will address a meeting of the Pernambuco United Trade Union Confederation (CUT), followed by a labor-community rally and press conference.

On Friday, Aug. 22, Brother Josue will be in Salvador, Bahia, the heart of the Black movement and struggle in Brazil. He will address various events sponsored by the unions and main Black organizations.

In a press statement issued on the eve of his departure for Sao Paulo, Brazil, Brother Josue noted the following:

“The occupation of Haiti, meaning the loss of Haitian sovereignty, is presented to the world as ‘humanitarian aid.’ But the Haitian government has no control over the Brazilian-led U.N. MINUSTAH troops. The U.N. troops are in charge of the Haitian police (PNH), prisons, courts and jails. This is dictatorship – not aid.

“Thousands of Haitians have been arbitrarily held in prisons without trial or hearings. The U.N. peacekeepers have, in their armored vehicles, created instability and enforced injustice. They mow down market women, shoot children, intimidate pedestrians, humiliate any lawful citizen they wish at will and on any whim with routine stops and searches, commit rapes and generally betray, violate and prey on the very population they were sent to protect. This cannot be called ‘humanitarian aid’ by any stretch.

“The Brazilian-led U.N. military presence has hurt, used unnecessary force and violence, abused and made Haiti more unsafe for the ordinary Haitian than ever before. This occupation must come to an end. I remain convinced that if the young citizens of Brazil who are living in the streets were subject to these atrocities, one would expect someone to speak up in their defense.”