Poor News Network – The officers were waiting, loaded firearms dangling from their waists, steel filled chests puffed out, glassy stares behind helmets, all 3,000 of them – or maybe there were only eight? One got the woman from behind; one got her from the front. They knocked her down; they physically harmed her. She was one woman alone. She was a reporter doing her job. She was attacked by the police for no reason at all. Her only crime was being a media producer in a hostile location. 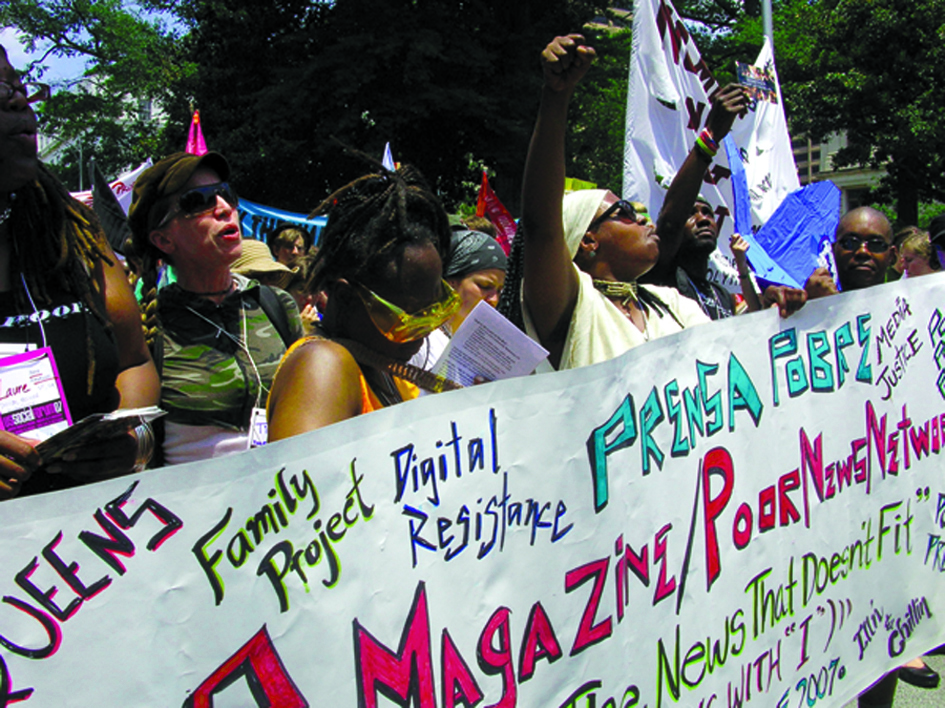 Twelve days before Amy Goodman was experiencing the fascist silencing of her powerful voice and that of her fellow Democracy Now colleagues by what POOR Magazine calls the po’lice, Nadra Foster, a mother of two, an apprenticeship graduate and 12-year-long unpaid media producer at KPFA, was experiencing a similar form of po’lice terror at the KPFA station in Berkeley because she was allegedly using the phone for a personal call.

This is where the similarities end. When the Amy Goodman story broke, there was national news coverage, which was great, because it detailed the ways in which the fascist police state we are all living in is only increasing its oppression. When the Nadra Foster story broke, it wasn’t considered real news by the powers that be inside KPFA and the Pacifica radio network, including Amy Goodman.

My questions go to the heart of this difference and this idea that somehow things that happen to some people constitute real-ness – that some people are real, that some media is real, that some perpetrations of abuse are real – yet some use of fascist force is perceived as OK, sanctioned and all right because “we” are doing it and it’s about “us” and it’s for “legitimate” reasons

All of my conscious colleagues at KPFA, Democracy Now, Pacifica, Free Speech Radio News, the SF Bay View, KPOO, the POCC Block Report and POOR Magazine are desperately concerned and dedicated to fighting the increased fascism that is being perpetrated on all people locally and globally – on migrant scholars at the border, on youth of color in Oakland, on families, children and individuals in Iraq and Afghanistan and Palestine, on poor people in struggle everywhere. This station and all the Pacifica stations and their correspondents across the globe are reporting, writing, recording and broadcasting every day on the wrong-nesses perpetrated by police, armies, militias and beyond – so why has it become OK to perpetrate that violence on our own folks EVER?

To insure that we are not EVER practicing hypocrisy and because of our work and dedication to all fights against injustice and oppression, we have organized ourselves at POOR as an indigenous organizing project. We practice the same standards of community, care-giving, accountability and self-protection that we promote and expect of all humans, organizations and communities.

At POOR Magazine we clearly understand that we all need to protect ourselves and stay safe in whatever way that means for all of us individually. That is why we have developed different forms of redress and community accountability to deal with wrong-nesses perpetrated by any one of us against another of us.

If an egregious act is committed against one of us, we call for a cross-organizational Community Council. We model it after tribal councils that exist in indigenous communities across the globe, councils of organizational elders who hear from all people concerned and as a community decide what is a proper form of redress for people’s actions.

What we do NOT do is call the police – EVER! The police, as all of always report, are used as agents of capitalism, fascism and power and operate under a culture of terror. They are taught to use force and weapons. They are instructed to apply harm, the same way they do on East Oakland with youth of color, with migrant workers, with houseless folks, with Palestinians on the Israel border.

My challenge to readers, my fellow media producers, artists, reporters, writers, activists and service providers from Amy Goodman to the management of the KPFA station, as well as several non-profit organizations that have also fallen into this same illogical pattern, is to adopt a policy of NO POLICE calls EVER – and with that to adopt other forms of organizational redress and accountability that is NEVER about violence.

Yes, that might take more time and more involvement of more people, but that ultimately means that we are not becoming the monsters that we are so focused on reporting on and working against, that we truly understand that our personal and organizational behavior MUST not emulate the perpetrators we are fighting, and that if we are going to report on the wrong-nesses of others we must start by fixing the wrong-nesses of ourselves.

For more information on POOR Magazine’s indigenous model of Community Accountability, call us at (415) 863-6306 or email us at deeandtiny@poormagazine.org. Read more about issues of poverty and race written by the people who face them daily at www.poormagazine.org.