NEWS BULLETIN: The Associated Press reported Tuesday, Oct. 21, that retired Chicago Police Lt. Jon Burge “was arrested Tuesday on charges of lying when he said he and homicide detectives under his command didn’t torture one or more murder suspects more than two decades ago, the U.S. Attorney’s office announced. … A report by two special prosecutors appointed by the Cook County Circuit Court concluded two years ago that Chicago police beat, kicked, shocked or otherwise tortured scores of black suspects in the 1970s and 1980s as they tried to force confessions. … The city has more recently agreed to pay $20 million to settle lawsuits by … former inmates who were convicted on evidence gathered by Burge and detectives under him and later spent years in prison.” – Ed. 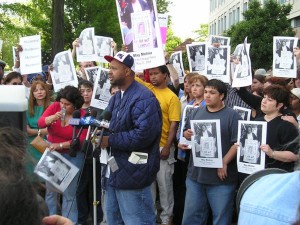 Political prisoner Aaron Patterson was tortured by Chicago police and brought up on trumped up charges originally in 1986, when he was framed for a double homicide. In 2003, after Gov. Ryan of Illinois acknowledged the torturing tactics of the Chicago Police Department under the leadership of Lt. Jon Burge and tenure of then prosecutor and now Mayor Richard M. Daley, Patterson and three other prisoners were released, a moratorium was placed on the death penalty and restitution was deemed to be paid.

After exposing the Daley Machine’s direct involvement in these trumped up torture cases from his platform as a candidate for the Illinois House of Representatives, Aaron Patterson was given another trumped up drug and gun case and a sentence of 30 years. The Safe Neighborhoods Act was used in his case to place him under federal custody. 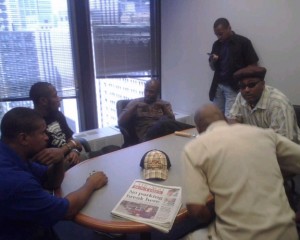 POCC Chairman Fred Hampton Jr.: Taking into account the government’s recent attacks waged against Aaron Patterson, we see it necessary to provide the people with an update. After being convicted on trumped up charges, Aaron Patterson, a true servant of the people, was transferred from Metropolitan Correctional Center in downtown Chicago, Illinois, to the infamous Big Sandy U.S. Prison in Inez, Kentucky. I emphasize “infamous” due to its notorious history since its opening in 2003 – a history which includes staff assaulting the prison population, stabbings of prisoners by staff and agents provocateurs.

Knowing this history, the campaign was immediately launched when Patterson was designated to be sent to this particular camp. The campaign that, one, put the government on notice, as well as was used to inform the people of the dire situation that the state was attempting to place Patterson in. And it also called on the USP (United States Prisons) to honor their own classification guidelines, in which by their own rules Aaron Patterson was not to be placed in this particular camp.

This campaign brought to the forefront such contradictions as some USP officials actually stating that they intend to implement the death penalty on Aaron Patterson, one way or another. This campaign also exposed to the international community the lengths to which the state would go to silence Aaron Patterson.

U.S. Congressman Danny Davis, who is responsible for overseeing transfer designations according to guidelines, was surveillanced and harassed by law enforcement officials immediately after calling into question the arbitrary transfer of Aaron Patterson to the infamous Big Sandy.

Since Patterson’s inception into Big Sandy, he nor the people have let up on the demand for the freedom of Aaron Patterson. Patterson came under more intense scrutiny after his historic May 2008 testimony to the United Nations Rapporteur, a testimony that not only addressed the frame-up and torture that he was subjected to, but he put on the world stage the conditions that the colonized community is subjected to – in general and, in particular, under the tenure of former State’s Attorney and present Mayor of Chicago Richard Daley, the mayor who U.S. President George Bush refers to as the most powerful mayor in the country.

To address the pressing matter at hand, Patterson has arbitrarily been placed in isolation, in other words, the jail inside the jail, in which he has been denied all visitation, and there have been attempts on his life. In one incident, while handcuffed, the isolation door was opened and another individual was brought into the cell, in which he immediately attempted to attack Patterson, armed with a shank (jail-house weapon).

Your help is urgently needed now

We need the same community that Aaron Patterson was and is a servant of to heed this urgent call that the government not be allowed to implement the death penalty on Aaron Patterson in no way, shape or form.

Call Warden Rios at (606) 433-2400 and inquire as to why Aaron Patterson is being held in isolation. And, most importantly, state that we are concerned for his well-being, especially taking into account the history of this particular prison, combined with the recent events surrounding Aaron Patterson.

Hit up the Free Aaron Patterson Defense Committee, P.O. Box 368255, Chicago IL 60636. And to get more info on the case, hit up www.myspace.com/freeaaronpatterson.