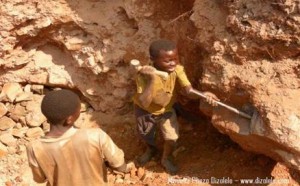 This is “Breaking the Silence on the Congo Week,” an international consciousness raising effort produced by Friends of the Congo, a non-profit in Washington, D.C., and Congo Friends, an international organization of students from all over the world. We can’t ignore the Congo, because the extremes of imperial violence there have made it a symbol for all of Africa and for all the suffering, domination and exploitation in the world. – Ann Garrison

The Democratic Republic of the Congo (DRC) is the green heart of Africa. The country has the second largest rainforest in the world. It is resource rich but plagued with human rights problems. Although you may have never heard about them, the humanitarian crises resulting from the plundering of the DRC’s mineral resources are severe.

The diamond you wear on your finger and minerals in your cell phone, laptop or PlayStation are likely to have come from Katanga Province in the DRC. This region’s vast mineral and natural resources include cobalt, copper, cadmium, industrial and gem diamonds, gold, silver, zinc, manganese, tin, germanium, uranium, radium, bauxite, iron ore, coal, niobium, timber, cassiterite and coltan. They are being mined in what amounts to an international plundering of this troubled country’s valuable resources.

One particular mineral found in the DRC, coltan, is in high demand in its refined form, tantalum, for use in consumer electronics. The increased demand for coltan has created a situation similar to the one usually associated with “conflict diamonds,” where profits are being used to fund military actions.

Coltan is believed to have paid for the Rwandan army to maintain a presence in the country by exporting at least 100 tons of coltan per month through Rwanda Metals. Over an 18 month period, this may have produced as much $250 million. The civil war that has raged in the DRC on and off since 1998 has claimed at least 3.8 million lives – a recent study by the International Rescue Committee reported 5.4 million – and has been funded in large part by the selling off of minerals through unofficial channels.

The Democratic Republic of the Congo also has more than 30 percent of the world’s diamond reserves, which produce more than $2 billion of diamonds annually. This wealth has not translated into a better quality of life for the people living in the DRC. The center of diamond mining, Mbjui Mayi, has little or no potable water, bad roads and scarce electricity.

These are just a few of the facts that paint a picture of the poverty in the DRC:

As the U.S. prepares to celebrate Labor Day, it is important to recognize the exploitation of the working people who extract the mineral resources used in the life-enhancing products that the labor movement has enabled many of us to enjoy.

In the DRC, child labor is pervasive. UNICEF estimated in 2001 that 23.5 percent of children ages 5-14 were working. Many are mining, hunting and fishing; others engage in prostitution.

Miners of any age in the DRC are often at risk. Many dig with their bare hands or shovels to extract ore. They are exposed to toxic or radioactive substances regularly, and the mines themselves often collapse.

For example, the Shinkolobwe uranium mine is the mine that supplied the uranium used in the atomic bombs dropped on Hiroshima and Nagasaki, Japan, by the United States in 1945. This mine was closed by the government in January 2004, but due to increased demand for cobalt – the DRC is the world’s largest supplier – informal digging continued. The mine later collapsed, killing eight people and injuring 13.

Many American and European companies are deeply involved in the pillaging of the African continent’s labor and resources. The De Beers diamond company owns 70 percent of the diamond mines in Africa and approximately 49 percent of all diamonds originate from central and southern Africa.

I would advise against purchasing any diamonds of African origin, but instead purchase Canadian diamonds that are guaranteed to be conflict-free.

Please keep the people and environment of Africa in mind, and realize that tragedies such as the Second Congo War, one of the worst conflicts since World War II, may not make the headlines despite the immense amount of human suffering.

Dustin Blitchok, a freelance writer and columnist, is a regular contributor and editorial advisor to the Oakland Press, a Pontiac, Mich., daily, and writes for the monthly Building Tradesman, a labor union publication. He can be reached at TheMicrobusMan@aol.com.