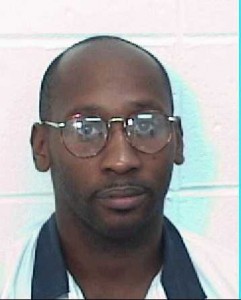 NEWS BULLETIN: “The federal appeals court in Atlanta on Friday halted Troy Anthony Davis’ execution, the third time his life has been spared shortly before he was to be put to death,” reported the Atlanta Journal-Constitution on Friday, Oct. 24. His lawyers had sought permission to file a new federal lawsuit based on his innocence. The stay is conditional, but we thank God he can live to fight on for the freedom he has been denied for nearly 20 years. Listen at www.flashpoints.net to the Block Report Radio interview with Troy’s sister Martina that was broadcast Friday at 5 p.m. on Flashpoints on KPFA 94.1FM. This victory, though temporary, is the people’s victory. It followed the delivery of 140,000 petitions to the Parole Board and a letter to the governor signed by over 100 Georgia clergy members as a large crowd marched in the freezing rain. – Ed.

by the POCC Minister of Information JR 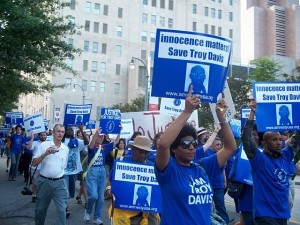 On Oct. 14, the U.S. Supreme Court refused to hear the death-row case of Troy Anthony Davis, putting him on the fast track to be murdered by the state of Georgia for the alleged murder of a Savannah police officer 17 years earlier. His death warrant has now been signed and his state murder is scheduled for next Monday, Oct. 27, although there was never any physical evidence against Troy, the murder weapon was never found, and seven out of the nine witnesses who originally testified against Troy have since signed affidavits stating that they were pressured and coerced by police to point Troy out as the killer.

The Block Report Radio show spoke on Tuesday, Oct. 21, with Martina Davis, Troy’s older sister, about the happenings surrounding the case of her brother as well as the international campaign to save his life.

MOI JR: A few days ago, the Supreme Court refused to look into your brother’s case. What is the status of the case now? 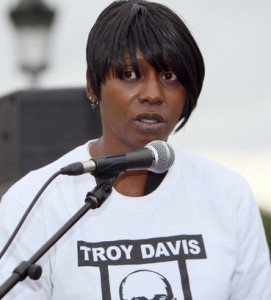 Martina: Well, the Supreme Court refused to hear Troy’s case as you stated. One of the particulars is that the Justices did not want to overturn state laws; that’s what a lot of the legal experts are saying.

You know, we are attacking everything from all fronts. There is a Dr. Musso, and he gets paid $18,000 per execution. So we’re attacking the doctor because he took a medical oath not to do any harm.

We are challenging the parole board and lawmakers. We’re having a big rally in Atlanta on the 23rd; it is a global day of action for Troy Anthony Davis. All over the world, there are things going on, and so we’re still fighting.

The parole board can still give clemency. The governor can actually push the parole board to do the right thing. Lawmakers are getting involved all over.

Justice Stevens from the U.S. Supreme Court has chimed in and said that Georgia does not give the death penalty proportionally. It’s mostly race-based, and they know that. [On Monday, Oct. 20, Justice John Paul Stevens “criticized the way the Georgia Supreme Court considers capital appeals, calling its review faulty and superficial,” according to the Atlanta Journal-Constitution. The likely result, Justice Stevens said, “‘is the arbitrary or discriminatory imposition of death sentences.'”]

So we are really trying to attack them at all fronts, and that’s what we’re doing. We’re not giving up, and I’m still getting letters from the guys on San Quentin’s death row offering support to me and my mother, but I want them to know that we have people all over the world that are trying to expose Georgia. We need to isolate the state and put them in a place where no one wants to deal with the state of Georgia as far as economic support, because this is just outrageous that every court is passing the buck.

There is a case called Herrera v. the United States, and in the Herrera case it states that actual innocence does not protect someone from execution, if the state feels that they got a fair trial. So there are a lot of things that are going on that need to be changed that are state and national laws.

But you know, the United States needs to be put on blast, because this could not happen to anybody who is rich. When terrorists attack the United States, they get multi-million dollar lawyers lined up to defend them. When your average “Joe Blow” on the street gets locked up for something like this, you can’t buy a lawyer. You can’t pay a lawyer.

And for the prosecutor to come out and say that he thinks Troy’s lawyer is paying for the recantation (by seven of the nine eyewitnesses who testified at Troy’s trial), it’s getting really absurd, and this man needs to be disbarred. So we are attacking from every front, we are not going to give up.

My brother Troy is in a very good place. Most people that go to see him think that they’re going to see him to cheer him up, and it is always the opposite. He’s there to cheer them up.

And you know, we’re also asking to be working with the murder victims’ families because it is amazing that this victim’s family has not got an opportunity to listen to the witnesses. They only hear what the parole board, the District Attorney and the police officers are forcing on them. I don’t understand why they are not willing to listen to reason. You know, it’s this burnt hatred, and it is not the entire family, but you know we are working very hard to do what we can.

And this is a very volatile situation, because we have Ku Klux Klan that are calling and chiming in threatening. We have the Fraternal Order of Police from Columbus, Georgia. There’s a lot of things going on. But it shows you that Georgia wants to hide this.

And the fact that we have people released from prison from one recantation is just amazing when we have 80 percent of Troy’s witnesses who have recanted, and they still want to kill him. And they still want to come up with this absurd information about another shooting and ballistics. None of this stuff came up in court, and the prosecutor is just putting this propaganda out.

There are people all over the world that are chiming in and that are continuing to write, but what we’re going to do is if they kill Troy Davis, we are not going to stop, because we’re marching on the city of Savannah. We’re going to do as much as we can to dismantle this system and get all of those elected officials out of office that are doing the wrong thing.

Martina: I definitely think that Troy Davis’ case had a lot to do with that. I think that he was one of the people that tried to get Troy’s case pushed through in the conferences that the Justices had, because ever since they enacted legal injections, Justice Stevens came out, when he found out about how inhumane it was to kill animals, in the same way with this lethal injection. And he’s been coming out speaking, and he’s been telling the truth.

The Georgia Black caucus doesn’t do anything. The Georgia Black elected officials, they remain quiet because they want to keep their office, and they know that Georgia is not majority Black, so they feel that they don’t have to do anything because it is political suicide for them.

But the thing about it is Justice Stevens spoke out, and he’s been hurting them. I’m actually glad that the article that he spoke out against was in the paper at the same time that the District Attorney was in the Atlanta Journal, because he just talked about a whole bunch of lies, just made up stuff and put it into the paper. And I’m like, how do you allow a prosecutor, who is sworn to tell the truth and uphold the law … He needs to be disbarred.

He really needs to be disbarred, and the thing about it is that Troy’s lawyers are trying to save his life. And it is very hard, when you are trying to save someone’s life, to stop and keep rebutting what somebody is doing, and you know that it is not factual.

That means, like I said, that we have strange fruit hanging from the trees of Georgia, and they’re not rich, white bodies. And the thing about it is that we really have to shut down this system, and my brother says if they are successful in killing him – and he is not looking at death, but he said if they are – we need to expose this system for what it is.

We cannot stop with the execution of Stanley Tookie Williams, Gary Graham and Reuben Cantu, people we feel should not have been executed. But the thing about it is, we have a momentum in the United States and all around the world supporting Troy, and we cannot allow it to die. We cannot allow these lawmakers at the U.S. and at the state level to continue to kill in our names.

To hear more Block Report Radio interviews with Martina Davis, you could go to www.blockreportradio.com. MOI JR can be reached at blockreportradio@gmail.com.

On Monday, Oct. 27, the date currently set for his execution, at 3 p.m., people who demand justice will STAND WITH TROY at the San Francisco Federal Building, 450 Golden Gate Ave. You can also text TROY to 90999. And you can call and email editors of major media outlets urging them to cover Troy’s case so more people will get involved.

Learn more about his case and more actions you can take at www.TroyAnthonyDavis.org and www.gfadp.org. BE SURE TO SIGN THE PETITION at www.amnestyusa.org/troydavis. Amnesty International opposes Troy Davis’ execution unconditionally.

Tens of thousands of people in the USA and around the world have appealed for executive clemency for Troy. Among them are former U.S. President Jimmy Carter, Archbishop Desmond Tutu and Pope Benedict XVI; the European Union, the European Parliament and the Secretary General of the Council of Europe; former FBI Director William Sessions and former and current members of U.S. Congress Bob Barr, Carol Moseley Braun and John Lewis.

Revolutionary journalist and Black Panther veteran Kiilu Nyasha warns: “My gut tells me that if they succeed in killing Troy, the flood gates will open and Mumia will be next. We must move to save Troy!”