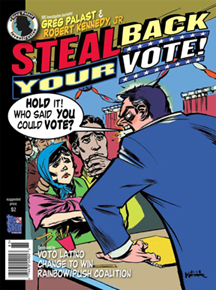 Greg Palast and Robert F. Kennedy Jr. believe that the 2008 elections have already been stolen. What’s an American to do given these circumstances? They suggest: “Steal it back!”

Palast, an investigative journalist, and Kennedy, a voting rights attorney, paired up to create a nonpartisan voter guide that illustrates the six ways that American votes will be stolen this election and seven ways to steal them back.

You may ask who’s stealing your votes. Palast and Kennedy believe that the Help America Vote Act (HAVA), created in 2002, is one of the main reasons votes are systematically being stolen. Secretaries of state attempting to comply with HAVA are purging voters from the registration rolls and blocking new ones from registering. The purging occurs if a voter’s name does not match a government database.

Those who are at most risk for having their vote stolen are new voters, people of color, low-income, elderly and swing state voters, Palast told Truthout.

In 2006, Palast says that 40 percent of citizens who were purged from the voter rolls in California had Islamic, Vietnamese, Chinese and Hispanic names. These names were at most risk for misspellings.

The Steal Back Your Vote Guidelines promote the importance of going to the secretary of state website for your state to confirm that you are registered ahead of the election. 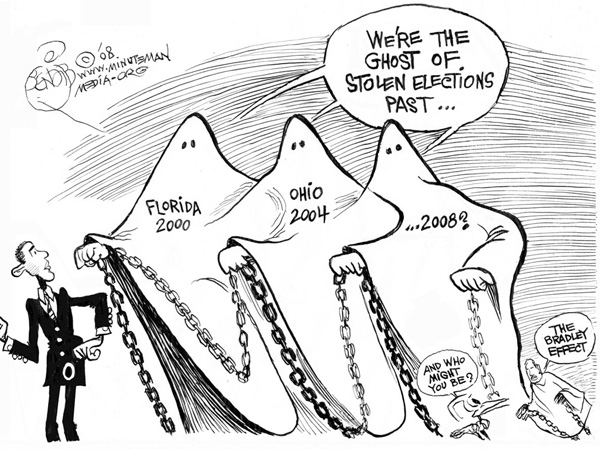 The New York Times appeared to confirm Palast and Kennedy’s findings on mass voter purges in its report last week titled “States’ Actions to Block Voters Appear Illegal.” The newspaper found that tens of thousands of eligible voters were being illegally purged ahead of the 2008 elections.

The swing states of Michigan and Colorado are also violating federal law, according to The New York Times, because they are removing voters from the registration rolls within 90 days of the presidential election.

“Once you sign that provisional ballot, the chances are officially one in three that your ballot will be thrown in the garbage can,” said Palast.

In their guide, Palast and Kennedy write that a provisional ballot will most often render a vote uncounted. They suggest seeking adjudication on the spot, by calling a voter’s rights hotline [1-866-OUR-VOTE (687-8683)] instead of accepting and signing the provisional ballot.

“Don’t go postal,” says Palast, urging voters not to mail in their ballot.

Palast told Truthout: “All you need is the most minor error, like you didn’t use your middle initial in your registration; not enough postage cost a third of a million votes in the U.S. the last time around because most ballots are two stamps, not one. There’s a million ways to not count your vote on a mail-in; don’t do it.”

The other suggestions in the “Steal Back Your Vote” guide include voting early, getting involved in voter-registration and get-out-the-vote organizations, and pursuing legal action if disenfranchised.

This story originally appeared as a Truthout Report at www.truthout.org/101408R, where you’ll also find a video interview with Greg Palast. Read Kennedy and Palast’s story in Rolling Stone at www.rollingstone.com/politics/story/23638322/block_the_vote and an exclusive interview at www.huffingtonpost.com/m.s.-bellows/voting-experts-bobby-kenn_b_134920.html and download the comic book, donate to distribute it and watch the short film at www.stealbackyourvote.org.