Berkeley – At 4 p.m. on her very last day of employment as the executive director of the Pacifica Foundation, Nicole Sawaya permanently appointed Lemlem Rijio as the general manager at KPFA-FM, a position Rijio has been occupying on an interim basis for two years. 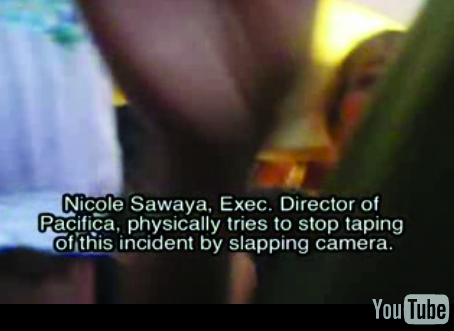 Rijio has been under fire as of late, with Berkeley police violently arresting a station programmer who had allegedly been banned in a dispute over copier usage. Seventy-four of 215 station staffers have signed a statement of no-confidence in her leadership.

A hiring process had been underway since last fall, with Sawaya instructed to choose from among a pool of 11 candidates submitted by a hiring committee.

Sawaya sent an e-mail at 4 p.m. on her last day of employment confirming that she had made the hire. The Board of Directors is expected to discuss the issue at a Friday evening teleconference.

Local board member and former KQED board member Sasha Futran commented: “Does the PNB (Pacifica National Board) understand what has just been done and the ramifications of disregarding the opinions of so many people deeply involved with KPFA? How can there be such disrespect for those voices?”

Nadra Foster, the programmer of 12 years duration whose alleged banning and violent removal from the station by the Berkeley police on Aug. 20 ignited considerable criticism, is still facing five misdemeanor charges stemming from the incident.

Rijio failed to heed instructions from both the national and local boards to recognize the Unpaid Staff Organization and use its grievance procedure to settle disputes with the station’s large volunteer workforce.

National board member Joe Wanzala commented: “I would like to formally register my dismay over this decision and request that the board rescind this on-the-way-out-the-door action by the outgoing executive director of a deeply problematic interim general manager who is the subject of a no-confidence vote from a huge number of staff members at KPFA – making the decision one that cannot, in my view, augur well for morale or for the stability of the station. Furthermore, as previously noted, there are serious problems with the underlying process as at least two of the 11 candidates in the pool were not interviewed.”

The Pacifica Foundation is the FCC license-holder of five large radio stations in Berkeley, New York City, Houston, Los Angeles and Washington, D.C., and sends programming to over 100 community radio affiliates throughout the nation. Berkeley’s KPFA is the flagship station, founded in 1949 by World War II conscientious objector Lew Hill and charged with “contributing to a lasting understanding between individuals of all nations, races, creeds and colors” in its mission statement. The network, one of the largest communications assets in the nation that broadcasts from a progressive point of view, is said to be suffering severe financial difficulties.