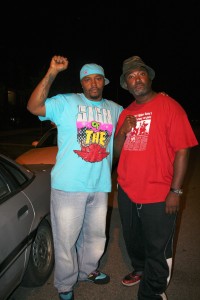 A lot of people who met Tupac Shakur say he was such a one-of-a-kind person that you walked away knowing that he was going to make history. I never met Pac, but I could say the same about Malik Yusef, the Wordsmith, from the Rollin’ Hundreds in Chicago.

I met him before I heard him spit, through Chairman Fred, when we were introduced in the process of Malik bringing bags of clothes to the Prisoners of Conscience Committee in Chicago to be distributed as a part of the Black to the Community Campaign, which aids and assists people coming home from being held captive, providing them with clothes and other resources and necessities. The work was being done under the radar, and it inspired me.

I first heard Malik on his solo debut, “The Great Chicago Fire,” which is one of the greatest and most interesting spoken word albums that I’ve ever come across. The production was dope, intertwining Malik’s wordplay with the vocal talents of a number of different artists, including Kanye West, Common and Carl Thomas, creating a masterpiece that really exemplified his talent.

It is rare for someone to become a giant in an extremely competitive field like music on his first shot out of the gate. Check out Malik in this exclusive one-on-one interview.

MOI JR: How did you become a part of this Jill Scott tour that recently left the Bay Area?

Malik Yusef: It’s the Jill Scott/Raheem Davaughn tour. I met Raheem at the Grammys last year, went to the studio, messed around with Kanye for a few minutes or so and then did some work. I brought him out to New York to do a show with me for Jackie Robinson’s 60th anniversary of breaking the color barrier. Then he came to Chicago to do a big show, the Expo for Today’s Black Woman. Then we recorded a song for his album, and Jive Records approved it.

They let me do some positive poetry, man, you know. I’m always trying to uplift the female entity on the planet Earth. They approved it. I think that we kind of snuck it in on them or something like that. They probably didn’t see it. It wasn’t about no rims or booties shaking, but they still let it go on the album. I can’t believe it, but hey.

MOI JR: A lot of people may remember you from “Crack Music” as well as you have your own slapping album. I had to put a few people up on it at this radio station right here. You got a song on it with you, Common and Kanye on it. And I know that you fool with a lot of the heavyweights in the Chicago area. Can you tell us how you got into the spoken word circuit and how you got to hook up with them dudes?

So I headed on down there one Sunday afternoon, and they asked me to come back the next week. But the next day I went to Spices Jazz Bar – what they based “Love Jones” on – and I went back the next week to the Green Mill, and they was like, “Make sure you come back next week.” And when I came back, it looked different: Lights were on, and it was a different atmosphere. And I walked past this big apparatus that happened to be a news camera, that said “ABC World Wide News,” and when I walked in, they were like, “Are you ready?”

And they put me right on stage. I was just that flavor that they put in there, you know, just to be able to say that “we have a diverse audience and diverse group of performers.” When it aired, everybody thought that I was famous already, which I really wasn’t. That was only my third time ever being on stage. So when it aired, they was like, “Oh, Malik Yusef from Chicago.”

They showed the Bay, they showed California and all of the places that they got slam poetry jumping off, and they showed me in Chicago. And by the divine sincerity of the universe, it made it feel like I was already there, so people already assumed I was there, so they conducted themselves as such and started putting me on gigs and stuff like that.

And you know, my buddies Tupac and Biggie and Common and you name it, they started getting popular, and they infused me more into the industry, and I met more and more people who were like, “Come be on my album. Since you’re on Common’s album, be on mine.” And it just started this effect.

So when I started doing my album, “The Great Chicago Fire,” on Universal Records, I had Common and Kanye produce the track. He was like, “Who’s going to be on the track?” I said, “Common.” He said, “Let me get on it too.”

I said, “I didn’t know you rapped like that.” He was like, “Yeah, I be rapping. That’s what I do: I’m a rapper.” So I put him on, and that was the best decision that I ever made in my musical career, was doing a song with Kanye, who was later to become Kanye “Mr. West.”

I can’t say that I planned it all out or charted the stars, so on and so forth, it was just you know what’s in your heart. And you want to help people genuinely, and sometimes you help the right person. I might help a million people before I help a Kanye West, but because I genuinely walk my path in trying to assist and help other people, uplift them, it became what it is.

MOI JR: A lot of people don’t know that you and Chairman Fred Hampton Jr. helped to persuade Kanye to say what he said about George Bush not caring about Black people dealing wit’ Hurricane Amerikkka, which some people call Katrina. Can you tell the people a little bit about what went down and what got Kanye West to say what he had to say.

Malik: Yeah, you know, I’m always coming from a political standpoint – well, not so much political but a social agenda is what I serve more than I serve anything else to try to instill some equanimity amongst the classes and the “races” and all that ol’ contradictory nonsense. But we talked about the atrocity that had taken place down in New Orleans at an autograph signing, when he was signing his albums. So I was there. We were at Borders in Chicago and the Chairman came down and we kicked it.

MOI JR: When was this? The day before?

Malik: The day before. And he was proud to show the Chairman that he had some positivity on the album. He was like, “You heard the song wit’ me and Malik, ‘Crack Music’? I’m talking about George Bush; I’m talking about Ronald Reagan (laughing).

And the Chairman was like, “Yeah, man, that’s some powerful stuff right there.” He was like, “Yeah, man, I’m going do some more. I’ma be on tv tomorrow. I’ma say some more stuff.” And I guess somewhere in Kanye’s weird mind he said he was going to decide to … Man, it took some courage to do that. That was hard, boy.

MOI JR: No doubt. He gets a salute for that.

Malik: A brand new album out. He finna do the Superbowl, and he go on and say it. To me it was like self explanatory. It’s like saying dinosaurs don’t care about automobiles. They have no need for automobiles so they don’t care about them. But it did give us a lens to view the situation through: why there was no help, why Jesse Jackson didn’t rush to … Operation Push and all that, so …

MOI JR: Why did you think that that was an important move? It was brave on Kanye’s part, but why’d you feel that that was a move that had to be made?

Malik: I felt like people wanted to say it – it was at the tip of their tongue – but because you understand how powerful the president of the United States is and what a powerful office that is – friends in high places, so on and so forth – but somebody had to say it. It was just too big of an event not to verbalize it.

And not that you had to be so loquacious or verbose about it: Just that small statement is coming from a sense of pain. Like what you would tell, if you had a girlfriend, and she wasn’t treating you right. Maybe you hurt your back playing basketball or whatever and she doesn’t tend to that wound, and you say, “You don’t care about me.” That’s what it really felt like and it came from that place where we are asking for attention, asking for some help.

We’re asking for some concern and gettin’ none, so you tend to come out and say what everybody else is thinking. If you see a lady in the street and she is carrying all the groceries into the house. Not that she is not strong enough to do it, but you’re like, “Damn, her husband is right there on the stairs holding the door. Like what the fuck, go out there and help. He don’t care about her.”

That’s what you’re going to think because she’s in a distressful situation and she is not getting assistance from the person who is obliged to help her. And Amerikkka is our country too. We built this, you know (singing), “We built this city, tun-ta tun-‘, you know. So we do need some help, man; we do need some assistance, man. You know? 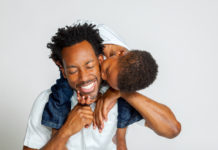 Fatherly, a website for dads that aims to empower men to raise great kids