NEWS BULLETIN: PG&E has spent a record-breaking $9.9 million to defeat Prop H – $4 million just in the last nine days – according to official campaign finance records. The Yes on H campaign has spent only $61,059. PG&E is wallpapering Bayview Hunters Point, the neighborhood its power plant poisoned for over 75 years, with its No on H signs and propaganda. It’s up to us to win clean, green public power!

“Pacific Gas and Electric Co. raised its electricity rates by an average of 6 percent on Wednesday to cover the cost of the natural gas that fuels most California power plants. That’s more than the 4.4 percent increase the utility predicted in July, when it first asked state regulators for permission to hike rates this fall.” – San Francisco Chronicle Business Section Thursday, Oct. 2, 2008

“We are on an unsustainable collision course with nature that could lead to our ultimate destruction unless our generation acts quickly and decisively to change the course of history.” – San Francisco Clean Energy Act flyer

The private investor controlled utility corporation Pacific Gas and Electric owns most of the power generation and distribution system in San Francisco. PG&E’s monopoly and profit driven delivery of electric service in this city has “fueled” three herculean efforts in the past decade to terminate its exclusive franchise. 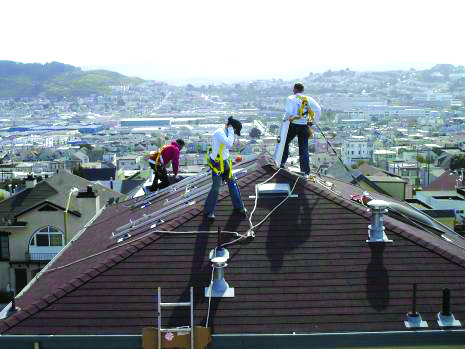 The “public power” movement seeks to offer the City and its stakeholders ownership and operation of a utility that could reduce the cost of electrical bills paid by rate payers like yourself. Additionally, public power could derive more energy from clean renewable sources that do not endanger public health, including solar and wind.

The San Francisco Clean Energy Act submits to the voters on Nov. 4 a ballot measure that amends the city and county charter to require the City to transition away from fossil fuels and towards clean, non-nuclear sustainable energy production at affordable rates.

Public power has a track record of success in California cities like Los Angeles and Sacramento. In 2001 and 2002, amidst California’s energy crisis and rolling blackouts, two “David versus Goliath” public power measures were narrowly defeated in San Francisco due to gargantuan opposition and ballot box fraud perpetrated by operatives of the bankrupt utility PG&E.

San Francisco residents are already on record in support of clean energy not derived from fossil fuels, nuclear, waste incineration or other sources “detrimental to human health.”

U.S. presidential candidate Barack Obama has proposed, at the centerpiece of his energy plan, a $150 billion dollar investment in clean energy over the next decade, including green job development, research and development and entrepreneurship.

The Clean Energy Act has already benefited San Francisco by forcing PG&E to contract with two companies this past August to buy 800 megawatts of solar-generated electricity, the amount of electricity – generated from sunlight – needed to power 239,000 homes annually. Within three years PG&E proposes to buy “utility scale photovoltaic solar power” from subsidiaries of OptiSolar and SunPower, who plan to build the world’s two largest solar plants in California operational by 2011.

Solar power delivers energy at zero fuel costs, minimal maintenance and zero carbon emissions, but the investment needed for startup is not small. As solar technology prices decline and the costs for natural gas, coal and nuclear energy increase, the U.S. is expected to reach a point where 10 percent solar energy must be achieved by 2015, according to the California clean tech research firm Clean Edge.

PG&E applauds itself as a green leader but has failed to deliver on the state mandate that requires the utility to source 20 percent of its electricity from renewable sources by 2010. In 2008 only 14 percent of its power comes from clean renewable sources. Additionally, PG&E officials acknowledge their failure to reach the 20 percent mandate by 2010 due to expiring tax incentives for renewable energy and other “issues.”

“PG&E is not investing in renewables beyond legal mandates, but has positioned itself for nuclear and fossil fuel expansion,” according to Aliza Wasserman in the August 2008 Sierra Club Yodeler.

Proposition H offers an opportunity for San Francisco to obtain up to 51 percent of its power from renewable sources by 2017 and 100 percent by 2040. Unlike the storm of anti-Prop H mailers and television ads funded by PG&E from the money you pay for your steadily rising electric bills, Proposition H is a charter amendment that would permit a study to determine whether the city would have the option to continue its contract with PG&E or decide to administer its power generation and distribution through another operator or the city itself.

It directs the SF Public Utilities Commission to establish one document laying out the long term integrated resource plan for transmission, distribution and electricity resources. Additionally, it establishes an Independent Ratepayer Advocate to represent the interests of ratepayers and ensure affordable and reliable service.

The San Francisco Clean Energy Act will ensure that San Francisco will build enough solar, wind power and energy conservation projects to give the City 100 percent clean energy within three decades. It will make San Francisco a worldwide leader in the fight against global warming and catastrophic climate change.