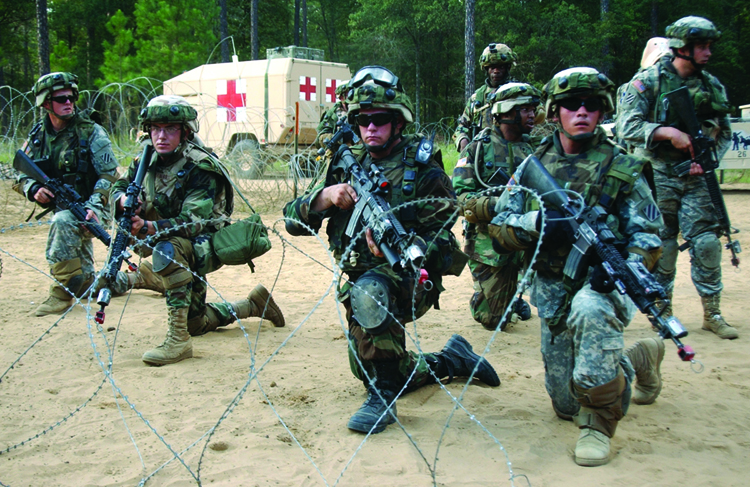 US combat troops in Iraq repatriated to ‘help with civil unrest’

The Army Times reports that the 3rd Infantry’s 1st Brigade Combat Team is returning from Iraq to defend the Homeland as “an on-call federal response force for natural or manmade emergencies and disasters, including terrorist attacks.” The BCT unit has been attached to U.S. Army North, the Army’s component of U.S. Northern Command (NorthCom).

“Beginning Oct. 1 for 12 months, the 1st BCT will be under the day-to-day control of U.S. Army North, the Army service component of Northern Command, as an on-call federal response force for natural or manmade emergencies and disasters, including terrorist attacks.

“It is not the first time an active-duty unit has been tapped to help at home. …

“But this new mission marks the first time an active unit has been given a dedicated assignment to NorthCom, a joint command established in 2002 to provide command and control for federal homeland defense efforts and coordinate defense support of civil authorities.

“After 1st BCT finishes its dwell-time mission, expectations are that another, as yet unnamed, active-duty brigade will take over and that the mission will be a permanent one.

“The command is at Peterson Air Force Base in Colorado Springs, Colo., but the soldiers with 1st BCT, who returned in April after 15 months in Iraq, will operate out of their home post at Fort Stewart, Ga., ….

“The 1st of the 3rd is still scheduled to deploy to either Iraq or Afghanistan in early 2010, which means the soldiers will have been home a minimum of 20 months by the time they ship out.

“In the meantime, they’ll learn new skills, use some of the ones they acquired in the war zone and more than likely will not be shot at while doing any of it.”

The BCT is an army combat unit designed to confront an enemy within a war theater. With U.S. forces overstretched in Iraq, why would the Pentagon decide to undertake this redeployment within the USA, barely one month before the presidential elections?

The new mission of the 1st Brigade on U.S. soil is to participate in “defense” efforts as well as provide “support to civilian authorities.” What is significant in this redeployment of a U.S. infantry unit is the presumption that North America could, in the case of a national emergency, constitute a “war theater,” thereby justifying the deployment of combat units.

The new skills to be imparted consist in training 1st BCT in repressing civil unrest, a task normally assumed by civilian law enforcement. What we are dealing with is a militarization of civilian police activities in derogation of the Posse Comitatus Act.

The prevailing FEMA emergency procedures envisage the enactment of martial law in the case of a terrorist attack. The 1st BCT and other combat units would be called upon to perform specific military functions:

“They may be called upon to help with civil unrest and crowd control or to deal with potentially horrific scenarios such as massive poisoning and chaos in response to a chemical, biological, radiological, nuclear or high-yield explosive, or CBRNE, attack.

“Training for homeland scenarios has already begun at Fort Stewart and includes specialty tasks such as knowing how to use the ‘jaws of life’ to extract a person from a mangled vehicle, extra medical training for a CBRNE incident, and working with U.S. Forestry Service experts on how to go in with chainsaws and cut and clear trees to clear a road or area.

“The 1st BCT’s soldiers also will learn how to use ‘the first ever nonlethal package that the Army has fielded,’ 1st BCT commander Col. Roger Cloutier said, referring to crowd and traffic control equipment and nonlethal weapons designed to subdue unruly or dangerous individuals without killing them.

“‘It’s a new modular package of nonlethal capabilities that they’re fielding. They’ve been using pieces of it in Iraq, but this is the first time that these modules were consolidated and this package fielded, and because of this mission we’re undertaking we were the first to get it.’

“The package includes equipment to set up a hasty road block; spike strips for slowing, stopping or controlling traffic; shields and batons; and beanbag bullets.”

Civil unrest resulting from the financial meltdown is a distinct possibility, given the broad impacts of financial collapse on lifelong savings, pension funds, homeownership etc.

The timing of this planned militarization is crucial: How will it affect the presidential elections scheduled for Tuesday, Nov. 4.

The brigade in its domestic homeland activities will be designated as the Consequence Management Response Force (CCMRF, pronounced “sea-smurf”). What “consequences” are being envisaged?

In a conference held under NorthCom last February, the mission of CCMRFF was defined at www.northcom.mil/news/2007/030507.html as follows:

“How to protect communities from terrorist and biological attacks topped the agenda last week for more than 100 service members and civilians gathered at Joint Task Force Civil Support headquarters at Fort Monroe, Va.

“‘We’re giving operationally focused briefs to our CCMRF (CBRNE Consequence Management Response Force) units to help them prepare and successfully deploy for a CBRNE mission in the continental United States, its territories and possessions,’ said JTF-CS Current Operations Specialist Hawley Waterman, who helped organized the conference. ‘This is also an opportunity to get acquainted and establish better relationships with (subordinate commanders).'”

What is envisaged is the possibility of a false flag terrorist attack on America, which could be used as a justification for retaliatory or preemptive military action overseas – e.g. against Iran – as well actions on the domestic front. The ultimate objective of this deployment of 1st BCT is to apply combat experience in the Homeland:

“‘I can’t think of a more noble mission than this,’ said Cloutier, who took command in July. ‘We’ve been all over the world during this time of conflict, but now our mission is to take care of citizens at home … and depending on where an event occurred, you’re going home to take care of your home town, your loved ones.’

“While soldiers’ combat training is applicable, he said, some nuances don’t apply.”

The operation officially has an emergency mandate to “help American citizens on American soil, to save lives, provide critical life support, help clear debris,” but it also implies the running of military style operations. In fact it would appear that the emergency tasks helping civilians is a cover-up. This is a combat unit, which is trained and equipped to kill people:

“Some brigade elements will be on call around the clock, during which time they’ll do their regular marksmanship, gunnery and other deployment training. That’s because the unit will continue to train and reset for the next deployment, even as it serves in its CCMRF mission.

“Should personnel be needed at an earthquake in California, for example, all or part of the brigade could be scrambled there, depending on the extent of the need and the specialties involved.

“Other branches including the active Army’s new dwell-time mission is part of a NorthCom and DOD response package.

“Active-duty soldiers will be part of a force that includes elements from other military branches and dedicated National Guard Weapons of Mass Destruction-Civil Support Teams.

“A final mission rehearsal exercise is scheduled for mid-September at Fort Stewart and will be run by Joint Task Force Civil Support, a unit based out of Fort Monroe, Va., that will coordinate and evaluate the interservice event.

“In addition to 1st BCT, other Army units will take part in the two-week training exercise, including elements of the 1st Medical Brigade out of Fort Hood, Texas, and the 82nd Combat Aviation Brigade from Fort Bragg, N.C.

“There also will be Air Force engineer and medical units, the Marine Corps Chemical, Biological Initial Reaction Force, a Navy weather team and members of the Defense Logistics Agency and the Defense Threat Reduction Agency.

“One of the things Vogler [Col. Lou Vogler, U.S. Army North’s chief of future operations] said they’ll be looking at is communications capabilities between the services.

“‘It is a concern, and we’re trying to check that and one of the ways we do that is by having these sorts of exercises. Leading up to this, we are going to rehearse and set up some of the communications systems to make sure we have interoperability,’ he said.”

A national emergency could be triggered: “[H]orrific scenarios such as massive poisoning and chaos in response to a chemical, biological, radiological, nuclear or high-yield explosive [attack]” or a so-called CBRNE type scenario. One assumes that this is some form of domestic attack, allegedly by terrorists.

But at the same time, the Bush administration may be seeking a justification to establish martial law and intervene militarily within the USA. In the Army Times story of Sept. 8, Gina Cavallaro quotes 1st BCT commander Col. Roger Cloutier:

“I don’t know what America’s overall plan is – I just know that 24 hours a day, seven days a week, there are soldiers, sailors, airmen and Marines that are standing by to come and help if they’re called,’ Cloutier said. ‘It makes me feel good as an American to know that my country has dedicated a force to come in and help the people at home.'”

“This type of planning and coordination and training is a priority both in our headquarters and at NorthCom, as we understand our responsibilities to be ready should the requirement arise, God forbid,” said Vogler, reports the Army News Service in a Sept. 15 story headlined “Consequence Management Response Force to join Army Northern Command.”

The deployment of an Army combat unit on U.S. territory, with a mission to curb “social unrest” constitutes a dangerous historical precedent. It creates a new legitimacy, namely that combat units can integrate civilian law enforcement functions and that this comes to be accepted both by the U.S. Congress and the American public.

It should also be understood that the combat units repatriated from Iraq to “defend the Homeland” will be replaced by mercenary forces.

© Copyright Michel Chossudovsky, Global Research, 2008. This story originally appeared in Global Research Sept. 26, 2008, at www.globalresearch.ca/index.php?context=va&aid=10341. Chossudovsky is professor of economics at the University of Ottawa, often serves as an economic advisor to developing countries, has authored many books, including “America’s ‘War on Terrorism,'” and is the editor for the Centre for Research on Globalization, www.globalresearch.ca.

Is this the beginning of martial law?

In an interview broadcast Oct. 9 on Democracy Now! (www.democracynow.org) heard on KPFA 94.1 FM weekdays at 6 and 9 a.m. and on 700 other stations nationwide, Matthew Rothschild, editor of The Progressive magazine, told host Amy Goodman:

“(Consider) what President Bush has been doing. (Look) at National Security Presidential Directive 51 that he signed on May 9th of 2007, Amy. This gives the president enormous powers to declare a catastrophic emergency and to bypass our regular system of laws – essentially, to impose a form of martial law.

“And if you look at that National Security Presidential Directive, what it says, (is) that in any incident where there is extraordinary disruption of a whole range of things, including our economy, the president can declare a catastrophic emergency. Well, we’re having these huge disturbances in our economy. President Bush could today pick up that National Security Directive 51 and say: ‘We’re in a catastrophic emergency. I’m going to declare martial law, and I’m going to use this combat brigade to enforce it.’ …