Judge orders release of Albert Woodfox of the Angola 3 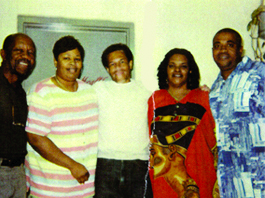 I suppose it’s the little things one misses most when deprived of human touch, human interaction, when one is surrounded by persons he can’t trust … little things like a child’s laughter, a mother’s smile, a brother’s hug hello. These are what one misses.

I recall listening to a recording of Albert Woodfox describing how it felt after 15 years or something crazy long like that to finally get a contact visit from his mom and feel her hug. And I can almost imagine how it might have felt when I recall seeing my daddy behind a glass panel – a phone between us.

I don’t remember picking up the phone and I don’t remember what we talked about, yet I’m glad my guardian took me and my brother to see him. I don’t think we ever visited him there again. And soon he was home.

Daddy was no stranger to prisons. It seemed that whenever he asserted his manhood, there was some rule in place – a trap he stepped into a couple of times until he was tamed. When I was born, my dad was stationed at Angola State Prison in Louisiana. I don’t know for how long, maybe three years. Whatever it was, when he got out he left the state and then sent for us to follow. We never returned.

The warrior instincts my dad exhibited stayed with him in California. These instincts – ones that told him he had the right to protect his family – proved wrong legally, which is why the police arrested him for running someone off our yard with an ax or hatchet. I didn’t think he did anything wrong; our dogs didn’t seem to stop the intruder, who kept coming even when told to stop. I can see daddy chasing him now swinging. I wonder if he got him.

I don’t know what it was like for my father to grow up in a place where it was against the law to be a man. Where one was always a child and if he forgot his place there was hell to pay. Daddy was born in 1933; it wasn’t much better for Albert Woodfox, Herman Wallace or Robert H. King, born 10-14 years later. Jim Crow still presided over the South and opportunities for young Black men were little to none.

One didn’t have to do anything except stay Black and visible to become the target of law enforcement, and this is what happened to Robert King over and over again as a child, a teenager and as an adult. The same was probably true for the other members of the infamous Angola 3, Herman Wallace and Albert Woodfox – certainly for my dad, who had lots of dreams unfulfilled.

Michael Mable spoke of his big brother, Albert, fondly. He told me about never missing his weekly visit to Angola State Prison – the drive, six hours one way from Houston, Texas. For 30 years he has made the pilgrimage. Before Katrina he was a lot closer, in New Orleans, the prison just outside Baton Rouge, but he doesn’t miss a week, unless he is working.

Now, after nearly 36 years in solitary confinement, Woodfox could be released on bail.

Hold the hallelujahs until it happens, skeptics say, and not without good reason. Woodfox has been here before – two other times, to be exact – tried for a crime he didn’t commit. The federal hearing was a month ago, and between September and October, the prosecution has slandered Woodfox’ name and reputation so much so that the community where his niece lives in Slidell asked her to find other housing for her uncle; he was not welcome there.

Unaware of what the state was up to while he deliberated, U.S. District Court Judge James Brady wasn’t pleased with the smear campaign the prosecution launched to build public support for their position, which is to deny Woodfox’s bail and keep him behind bars another 36 years.

Right now, he and Wallace, or “Hook,” are in the hole. Michael said his brother Albert told him prison officials were probably angry over the positive publicity calling for their release, what with visits and inquires from United States Congressman John Conyers and his staff.

The time the three men have spent behind bars is directly tied to their political beliefs and their activism, activism behind bars in solitary confinement for better treatment and better living conditions, a reasonable request given the circumstances they and many others find themselves in behind bars where their foreparents were formerly enslaved.

The warden, Burl Cain, stated in a deposition that Woodfox posed a threat to the prison population and was a danger to the community at large because he was still a Black Panther, what Cain called philosophically “Pantherism.” He said that if Woodfox were released he would share his beliefs with others in similar straights.

Gwen Filosa, reporter for the Times Picayune writes, “Angola Prison Warden Burl Cain testified this year that Woodfox is a danger to the community ‘because he is not a rehabilitated prisoner. He will be a predator when the opportunity comes his way.'”

The federal justice, Brady, while reviewing the case, disagreed and said he “found no evidence that Woodfox was a danger to society.”

Despite this, Cain and his cronies, the current and past state attorneys general, James D. “Buddy” Caldwell and John Santherfield, believe this man, Albert Woodfox, who has only improved the quality of life for those around him, as did Herman Wallace and Robert King, while at Angola, “belongs in maximum confinement while in prison to keep him from disrupting Angola.”

The warden continued his diatribe according to the Tuesday, Nov. 25, news article. He said, “I still know that he is still trying to practice Black Pantherism, and I still would not want him walking around my prison because he would organize the young new inmates.”

Wow, what a tragedy, a prison full of freethinkers, enlightened men, men who were suddenly aware of the system they were formerly trapped in and now were able to escape, if not physically, certainly mentally and spiritually. The enslaver always worries about what happens when the enslaved person learns he cannot be owned or possessed by another person.

Michael said when he visited his brother last week, he was in the hole, which means Albert cannot make phone calls or have contact visits, so he and his brother spoke through a partition, I guess on a phone. Albert’s spirits were up, I heard, and he was thinking about Obama and the potential of working with the new president to educate the youth about making better choices so they don’t end up where he has spent so much of his life – he and Herman and King and so many other men and women and now more and more children. It’s a trap that closes like the jaws of death; there is often no shaking loose.

It could have been worse. In the past, Michael told me, those inmates held in the hole were stripped of their clothing and hosed down with cold water, given a mat to lie on at times, and during other times given nothing to sleep on. Nude, the men would shiver in the cold all night. These were some of the conditions the Angola 3’s activism changed – the residual effects of standing for what is right and just and fair. Some prison officials believe that when people are behind bars, they lose all their human and civil rights.

During slavery there was no due process, but now that slavery is technically over, the Burl Cains and James Caldwells cannot continue to get away with murder if they know there are people watching, taking notes and not letting any slight, no matter how small, go unchallenged.

Albert spoke about writing his memoir and dedicating his life to service, speaking engagements and generally sharing with others the lessons he’s learned over the time he’s had to reflect.

As soon as Albert’s living situation is secure, he will be out surrounded by family and friends, dining on cream corn and sausage, a meal his brother the chef says is something his family would eat as kids. It’s a meal Albert has a taste for, a meal his brother will gladly prepare for him.

To learn more, visit www.Angola3.org, www.3blackpanthers.org and www.A3grassroots.org. Bay View Arts Editor Wanda Sabir can be reached at wsab1@aol.com. Visit her website and blog at www.wandaspicks.com for an expanded version of Wanda’s Picks, her photos and her radio show.

More trials and tribulations for the Angola 3 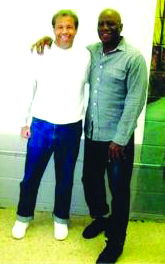 In his order issued Tuesday, Nov. 25, U.S. District Court Judge James Brady wrote: “At the hearing before this Court on October 14, 2008, testimony was adduced that if released Mr. Woodfox would live with his niece and her family in a gated subdivision in Slidell, Louisiana. Mr. Woodfox has withdrawn that request because of fear of harm to his niece and her family … This change was brought about by counsel representing the State of Louisiana contacting the subdivision home owners association and providing them with information regarding Mr. Woodfox.”

The Coalition to Free the Angola 3 sent that snippet from the judge’s order and added: “Herman Wallace, who was also convicted in the murder, remains in prison at Angola. He has an appeal pending with the Supreme Court of Louisiana, which is similar in content to Woodfox’ successful appeal. …

“Woodfox’ legal team is now working with the court to reach an agreement on a suitable release location and plan for Woodfox; once they agree to a plan, Woodfox will be able to leave Angola. The lawyers anticipate the process to take several more days. …

“‘In 37 years, Albert never gave up hope that someday he would walk out the gates of Angola,’ said Nick Trenticosta, a lawyer in the case. ‘We continue to hope that Herman will join him soon. Neither of these men should have spent a day in Angola for this crime.'”