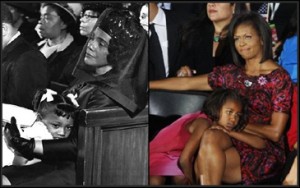 Yes, I grew up with the picture on the left. I know that America. But yesterday, on Nov. 4, 2008, I was most happy to actually meet the America that chose to make the picture on the right its new dawn. Honestly, as someone raised in post-Civil Rights America, I don’t know this America. I didn’t think it was possible.

I want to be part of this America where I don’t feel an outsider to Officialdom because I work for human rights, workers rights, reciprocal trade, respect for Haitian democracy and constitutional rule. I hope that this America won’t again turn away from the hope for the poor and disenfranchised all over this planet and go back to promoting the special interests of the corporate elites, valuing profit over people.

Sen. Barack Obama’s victory has introduced me to the possibility of this America. That’s a stunning feat. I hope all of us rise up to meet this America we all took a glimpse of on Nov. 4. Change will truly come if we actually ACT to extend the Nov. 4 values and broad, inter-generational coalition across the races, transcending political party, class and creed that was forged to elect Barack Obama. And extend it each and every day of our lives.

I didn’t believe it existed or could be pulled forth in my lifetime. That I’ve lived to see it, to know it’s there and not just the ephemeral dream, that I have lived to see a Black man, this man of integrity and enormous vision and competence, this son of an African, with an aunt who is still an “illegal alien” about to call home a White House built by the forced labor of African captives, that this America exists and was pulled forth for the world to see, makes me more thankful than I can say.

I pour libation for all the Ancestors who did not live to see that the color line has been crossed. I weep for all the American lives and Iraqi lives in Iraq and elsewhere around the world who paid the ultimate price for this day to come so simply. I pray the children in the Congo will benefit from this new day. I hope this means Haitian lives will also be more valued and a new US-Haiti partnership is on the horizon. I pray that a new dawn of American leadership is at hand and hope that President Barack Obama will work with us as we’ve outlined in “What Haitian-Americans are asking of the next U.S. president.”

Four years ago, part of the mission of the Haitian Lawyers Leadership Network, as articulated in Campaign Six, was to help to elect a president who would not extend the tyranny and disenfranchisement of the Black masses that Bush regime change brought to Haiti in February 2004. We hope to retire that campaign now and have a working relationship with this new Congress and this new president. Yes we can.

I thank and am so deeply grateful to all those who worked to get out the vote and so blessed to meet this America I don’t know but want to get to know, sustain, belong to and have a relationship with. It’s been a long time coming …

Is the nightmare over?

Nothing that I know or have lived, especially after Bush’s bloody regime change in Haiti on Feb. 29, 2004, prepared me for the momentous election of a tolerant, compassionate, seemingly people-over-profit Black man – who stands for a more equitable world – to the presidency of the United States.

The U.S. I knew had disregarded the laws, so at least I thought if Obama won, the election would be stolen or at least there would be some haggling for a week at the minimum. I was not prepared for the unanimous acceptance of a Black man as president of the United States by 11 p.m. on election night. The America I knew was all about “plausible deniability,” had a shameful legacy of racism, had carried on a pre-emptive war, lied to the American people about weapons of mass destruction, lied to the American people about what they are doing in Haiti, passed the Patriot Act, tortures prisoners at Guantanamo, discriminates against Haitian immigrants …

The U.S. I know:
Flaunts its love of justice and liberty and then supports Taliban-type regimes and when that goes awry, bombs the heck out of Afghanistan.

The America I know:
Sponsors elections throughout the “developing” world and then outfits its own private armies to “restore order” and reverse said elections whenever the U.S.-sponsored candidate fails to be elected by the populace. Mobutu, Duvalier, the Gerard Latortue Boca Raton regime: Who maintained these?

The America I know:
Armed and trained thugs and convicted felons Louis Jodel Chamblain and Guy Philippe in the Dominican Republic to invade Haiti in February 2004 in order to end Haiti’s constitutional democracy, and when these surrogates could not complete the task …

The America I know;
Sent in U.S. Special Forces, with the assistance of French and Canadian soldiers, to kidnap the constitutionally elected president of Haiti and exiled him to the Central African Republic in order to dominate Haiti, secure the Haitian market for U.S. goods and take by U.S.-sponsored force, once again, Haitian resources – state-owned companies, Haiti’s gold, oil, gas reserves, coltan et al … and all they couldn’t persuade Haitian President Aristide or the Haitian people to give away.

The America I know:
Was built on the genocide of the AmerIndians, the enslavement of Africans, and then the blood of centuries of lynching with impunity, the razing to the very ground of Black cities like Rosewood and the “Black Wall Street” in Oklahoma, the colonization of Haiti for 19 years as well as the neocolonization of Dominican Republic, Latin America … built on gunboat diplomacy and U.S. marines bringing their sort of “order” to “backwards” Black and Brown countries all over the world.

The America I know:
Legalized murders and mayhem under Jim Crow for 100 years after the Emancipation Proclamation, then, after the Civil Rights Movement, denied equal rights to Black Americans through racial profiling, mandatory sentencing, the criminalization of poverty and drug addiction, otherwise known as the “war against drugs,” or, more aptly, the “war against young Black males.”

The America I know:
Trained death squad soldiers and sent them forth, from Fort Benning, Georgia, unto the Haitian people, on to the people of Latin America …

The America I know:
Employed Toto Constant, Haiti’s strongman who was the head of the FRAPH death squad that murdered more than 3,000 Haitians from 1991 to ‘94 and then gave this terrorist asylum in New York while denying fleeing innocent Haitian refugees even a hearing of their asylum claims …

The America I know:
Incarcerated and indefinitely detained Black children, women and men, whose only crime is that they are poor and from Haiti, at Guantanamo Bay before they started using it as a place to indefinitely incarcerate and torture Al Qaeda and other “enemy combatants.”

The America I know:
Has an overwhelmingly disproportionately high African American male population – more than 50 percent of total U.S. prisoners – in jail when we only make up 13 percent of the population. More than half of death row prisoners in the U.S. are Black males.

I know the America of the dream that all men are created equal. I was raised in the post-Civil Rights era of the dream, again, deferred for the masses. I was raised in the post-Civil Rights era where America was starting to look like Haiti, with Katrina lifting up for the world to see the huddled and excluded Black U.S. masses left behind and Oprah, Michael Jordan and P.Diddy representing the few who had successfully made it in an America where overt institutional racism was replaced by the more insidious covert institutional racism and its denial.

Race doesn’t matter, the Neocon chorus went, sung most vociferously by the right wing neo-conservative Blacks who were universally celebrated as the “good Blacks” the “objective” and “not angry” Blacks. As in Haiti, these Black middlemen told white America what their rich white benefactors wanted them to say and what white Neocon-ruled America wanted to hear. Who are some of these Black conservatives? Well, African American folks like Shelby Steele, Ward Connerly, Armstrong Williams, Condi Rice, Colin Powell, Clarence Thomas et al.

That’s the America I know.

Is the nightmare over?

President Barack Obama was born of an African father, a white mother from America, spent his childhood in Asia. America/Africa/Asia: Will this internationalist bring U.S. change that will help bring relief to the disenfranchised of the world – to the children in Haiti, Baghdad, Congo, Beirut, Gaza and all the other places in the crosshairs of the American empire’s superpower guns?

There is work to be done, and it’s up to all of us, not just President Barack Obama.

In his victory speech, President-elect Barack Obama had the vision to place the responsibility for the welfare of the nation in our own hands, us the citizens, where, in a democracy, it truly must rest. We know the odds, but Obama’s victory has taught us not to be led by fear or doubt but faith and hope. He’s taught us that anything is possible. Yes we can.