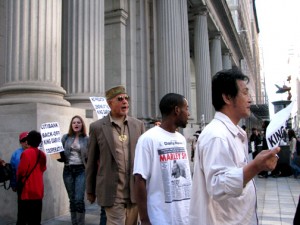 A Yes We Can Coalition of Asian and Black King-Garvey shareholders chanting, “Stop the land grab; yes, we can!” marched outside Citibank subsidiary Citi Community Capital in the heart of San Francisco’s Financial District on Thursday, Nov. 13. They are determined to stop a deal by Citi, HUD and the San Francisco Redevelopment Agency to financially enslave the owner-residents of the King-Garvey Co-op, formally known as the Martin Luther King-Marcus Garvey Square Cooperative Apartments, Inc. Standing on the shoulders of the giants whose names grace their homes, how could they not demand their civil rights and self-determination?

Leading the large and spirited crowd were King-Garvey Board President Carlos Levexier and his board colleagues, joined by King-Garvey founder Dr. Oba T’Shaka of San Francisco State University, along with San Francisco State students and community activists. Dr. T’Shaka, who also serves as national vice chair for organizing and training of the National Black United Front, explained to reporters: “Citibank and their subsidiary are trying to take over a co-op that is community owned in the Fillmore. The people owe only $3.5 million on it. What they’re attempting to do is refinance it for $40 million. The people will end up losing it.”

“Will they get any money?” a reporter asked. “No,” Dr. T’Shaka replied. “The developers will get the money.” “And the people who invested in it?” asked the reporter. “The people who invested – in 10 years they’ll own their property (if they aren’t refinanced), their shares worth $500,000 to $700,000. With the refinancing, they won’t get any of that because it will take 40 years to pay and it will cost too much to pay,” said Dr. T’Shaka. “They’ll end up losing it. Citibank will end up owning it.”

Poor people versus the biggest bank in the country makes this a David and Goliath struggle, but Dr. T’Shaka is hard to intimidate. The professor marching at One Sansome St., the meant-to-impress address of Citi Community Capital, with the “swagger” students love him for, brings with him 48 years of Black community organizing. In 1963, just two years after graduating from SF State, he not only headed the San Francisco chapter of the Congress on Racial Equality, negotiating in that one year 260 job agreements with major San Francisco employers and leading a Christmas boycott that opened jobs in all the department stores to Blacks, he also founded the Afro-American Institute, which became the Pan African Peoples Organization.

A community leader who supported the longest student strike in U.S. history, the SF State strike in 1968, which led to the first Black Studies Department at a four-year college, a movement that spread nationwide, Dr. T’Shaka has taught in that department, now called Africana Studies, since 1972. Yamina Washington, writing in the campus magazine [X]press, said his presence “has helped inspire young Black minds to become more conscious.” She quoted former student Rachel Bates, who said: “I truly view him as a living history book, and he speaks with such passion about Black issues, you can’t help but to listen and take heed. Plus, he just makes you feel proud to be Black.”

King-Garvey shareholders are no pushovers either. Unlike Congress, they understand the financial high jinks and “poli-tricks” pulled by Citibank and its subsidiary which helped cause the mortgage meltdown with unrealistic refinance deals that have caused millions to lose their homes and now are among the banks being bailed out by taxpayers to the tune of $700 billion. King-Garvey’s residents should not have to pay twice to finance Citi Community Capital: through taxes and also through an unfair refinance deal. Why should they strengthen a financial system that would then turn around to take unfair advantage of these low-income elderly minority heads of disadvantaged households?

As Carlos Levexier, president of King-Garvey Cooperative observed, “This struggle is about preserving the ownership rights of low-income inner city African American and Korean American landowners.” Carlos has used his degree in real estate from SF State and his fighting spirit as a champion wrestler and organizer to put a lockhold on HUD, the Redevelopment Agency and Citibank to “stop the land grab now!”

The 211-unit King-Garvey Co-op, a landmark at 1680 Eddy St., is owned by the shareholders under a 40-year deed of trust with a fixed interest rate of 7 ½ percent that will be paid off on Nov. 1, 2019. At a time when the real estate market has collapsed under sub-prime loans and millions of Americans are losing their homes, now King-Garvey shareholders, too, could lose their homes through an unnecessary refinance scheme fronted by Citi and backed by HUD, Redevelopment, a private developer and the gullible local leaders they have duped. 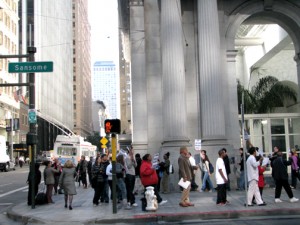 King-Garvey is among the last pieces of valuable real estate owned by African-Americans and one of the first also cooperatively owned by Korean- and other Asian-Americans in the historic Fillmore district of San Francisco. In uniting to oppose this land grab, Blacks and Asians are strengthening an old alliance born of a common history of cruel displacement from the Fillmore – internment of the Japanese during World War II and a few years later the bulldozing of the Fillmore, known worldwide as “Harlem of the West,” when the Redevelopment Agency’s urban removal, aka Negro removal, destroyed the homes and businesses of tens of thousands of Blacks.

In response to that travesty, through activism led by Dr. T’Shaka and other community organizers over 40 years ago, the Martin Luther King-Marcus Garvey Cooperative was created to provide homes for people who were being disenfranchised and displaced. Today the Redevelopment Agency has returned to the scene of its crime to grab back King-Garvey’s land in order to finish driving poor people of color out of the now upscale, gentrified Fillmore.

In a cooperative, the will of the majority rules. A majority of King-Garvey shareholders have signed a petition indicating they are not willing to support refinancing of their property at this time. They stand firmly in opposition despite threats from the Redevelopment Agency and HUD to terminate their Section 8 contract, an action federal and local officials keep falsely claiming would so reduce the co-op’s income it would be unable to make its mortgage payments and be forced into foreclosure. Even without Section 8 subsidies, however, each family’s own monthly payments add up to enough to cover the current $38,407 per month mortgage, utilities, insurance and all mortgage requirements.

Thomas Butts, an architect whose firm assessed King-Garvey’s needs in 2003 and 2007, provided a list of emergency and other longer term needs the co-op’s current operating funds and reserves are sufficient to meet. King-Garvey has already spent over $5 million as Butts recommended, and the emergency and other work done has enabled it to satisfy Section 8’s requirements for “safe and sanitary” housing since Aug. 15, 2005.

The co-op could do all the remaining non-emergency work that Butts listed without refinancing, borrowing or HUD tripling its Section 8 contract at taxpayers’ expense. If the vastly increased federal subsidies HUD is promising the co-op to carry out the partial rehab and refinancing are ever cut or eliminated, the shareholders would lose their property, because they couldn’t possibly pay the new $500,000 per month mortgage note without them.

Earlier this year HUD Secretary Alphonso Jackson resigned after being accused of engaging in a fraudulent housing scheme similar to that being forced on King-Garvey. During the Bush administration, HUD has supported the destruction of countless thousands of low- and moderate-income homes, including the demolition of 4,500 units of public housing in New Orleans that remained habitable after Hurricane Katrina.

Long time King-Garvey shareholder and director Sharon Jones believes Secretary Jackson was “just the tip of the iceberg. HUD has worked with local officials and developers all over America to control affordable housing like a housing Mafia.” HUD’s threat to cut King-Garvey’s federal subsidies to force it into this refinancing and rehab deal is, in her opinion, “part of a criminal conspiracy to defraud its minority, senior, female and significantly disadvantaged owners of extremely valuable property.”

In the case of King-Garvey, HUD in December of 2004 gave the cooperative a rating of 70 – a passing grade is 60. A month later HUD repeated that same inspection, giving King-Garvey a score of 37, a score so low HUD claimed it justified selling the property to make repairs. Did King-Garvey’s conditions truly decline that much in one month or was it being set up for a land grab?

In September, attorney Carl Williams orchestrated the second of two illegal board elections, which violated California’s Davis-Sterling Act by not providing adequate notice and in a host of other ways. This year’s election also violated the state corporation code by barring write-in votes. Citi Community Capital is thus contracting with an illegal board of directors, making its proposed refinance scheme illegal. A previous potential lender, the National Cooperative Bank, had pulled out after learning the board was illegal.

Citi Community Capital, an arm of Citibank, must stop its efforts to refinance King-Garvey. Dr. T’Shaka notes: “The American people voted for change in electing Barack Obama to the presidency of the United States. We must end land grab schemes that are more of the get-rich-quick schemes of bankers and other interests more concerned about making a profit than in seeing that the American people are free to exercise the rights of home ownership.

“King-Garvey shareholders through Operation We Are Family are doing the kind of bottom-up grassroots community organizing practiced by Barack Obama and the Civil Rights Movement that inspired him to see that the poor, including people of color – African-Americans and Korean-Americans – are able to build strong families and communities through cooperative housing ownership. We call on Citi Community Capital to place human rights before material profit and end this refinancing scheme.”

Disguising a land grab as refinancing is an ironic use by Citi Community Capital of money from the $700 billion bailout allegedly designed to get banks to once again provide housing loans. The bailout is supposed to keep people in their homes, not drive them out.

“Resident-owned housing cooperatives were established in response to the Watts riots to give inner-city residents and those displaced by urban renewal a stake in the community and a decent living environment,” explains Sharon Jones. “Yes we can block this loan and stop the Housing Mafia from its last-minute rush to fatten the fat cats and steal King-Garvey from its low- and moderate-income African-American and Asian owners!”

She added: “Yes we can build our own future from the bottom up, America. King-Garvey can help the Obama Transition Team show America how it’s done!”

For more information, contact Board President Carlos Levexier at globallos@yahoo.com or (415) 994-6898. Listen to excellent, well balanced coverage of the march by Wendell Harper on KPFA News for Nov. 13, about 40 minutes into the program.