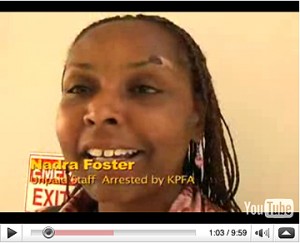 On Nov. 10, KPFA General Manager Lemlem Rijio announced through email that Lois Withers, KPFA’s business manager, was resigning. For those who keep up with KPFA business, Lois is the white woman who called the police on Black programmer Nadra Foster, falsely accusing her of being banned, on Aug. 20. Consequently, Nadra was beaten up, thrown to the ground, kicked in the head, strait-jacketed and forcibly removed out of the station, resulting in her facing five charges: two counts of resisting arrest, two counts of assaulting a police officer and one count of trespassing.

This incident was reported in the SF Bay View newspaper, the SF Chronicle, the Berkeley Daily Planet, the Oakland Post and on IndyBay Media, yet to this day the initial incident still has never been talked about on the KPFA News, by the main anchors on the Morning Show or by Democracy Now.

Lemlem Rijio wrote in her email, “KPFA’s business manager for the past four years, Lois Withers, has been offered a great position with a great environmental organization and will be leaving her position at KPFA in the coming couple of weeks.

“Lois has done outstanding work, expanding KPFA’s capacity in administration and financial management, and we thank her for her great contributions to KPFA/Pacifica. Lois has exemplified excellent work ethic while KPFA’s business manager and has developed systems and structures that help KPFA achieve financial accountability and sustainability.”

Does Rijio consider Withers initiating under false pretenses the Nadra Foster beating by Berkeley police to be “outstanding work” and “great contributions to KPFA and Pacifica”? She must, because in her statement she never mentions the incident, and furthermore no one has been disciplined to date for what happened to Nadra Foster inside of the KPFA radio station in Berkeley.

It is worth mentioning that Lemlem Rijio and Nadra Foster are both single mothers, each with two children, who used to be friends and hang out together.

On the positive side of things, three out of the five culprits from KPFA and Pacifica management who were responsible for what happened to Nadra Foster and the aftermath have resigned: Nicole Sawaya, the former executive director of Pacifica, Dominga Estrada, the former human resources officer at Pacifica and now Lois Withers, the KPFA business manager.

The remaining two responsible are Sasha Lilley, the program director for KPFA, and Lemlem Rijio, the general manager of KPFA. Sasha was directly on the scene when Nadra was beaten and refused to help her, according to Hard Knock Radio producer Anita Johnson, who was an eye-witness to the Berkeley police beating of Foster. And Lemlem not only refused to discipline anybody, she has led the attempted cover-up, with the help of KPFA News, the main anchors of the Morning Show and Democracy Now, who, to this day, have refused to mention the issue on air.

Although, with Lois Withers resigning, we won a battle, we still have a war to fight in getting justice for Nadra Foster, getting a daily/weekly Black public affairs show on KPFA, and removing pro-police administrators like Lemlem Rijio and Sasha Lilley from the KPFA and Pacifica staff.

If you would like to support Nadra Foster in her legal battles as well as with her medical tribulations, considering she will not be able to use one of her arms for at least the rest of the year, you could give money directly to the Nadra Foster Defense Fund at Wells Fargo or email her at nadrafosterdefensefund@gmail.com, as well as support her in court. Her next court date is Wednesday, Dec. 10, 9 a.m., at 661 Washington St. in downtown Oakland, in Courtroom 104.

No funds for tasers or war criminals: Stop state violence in San Francisco and Congo