Special to the NNPA from the Afro-American Newspapers 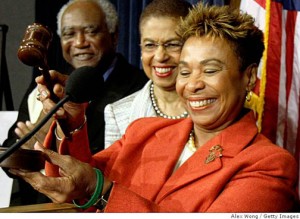 Washington (NNPA) – In selecting Rep. Barbara Lee, D-Calif., as its new chair, the Congressional Black Caucus chose one of its most progressive members who, days after Sept. 11, 2001, was the only person in Congress to vote against authorizing the use of force in Iraq.

Hailed as a hero among anti-war activists, she received numerous death threats for her vote against the war, forcing Capitol Hill police to provide special protection for her.

An early supporter of Barack Obama’s candidacy for the presidency – when many of her fellow Black Caucus members endorsed Obama’s Democratic rival, Hillary Clinton – Lee remains one of the war’s strongest critics. She has pledged to continue to advocate on behalf of a progressive agenda that includes ending the war in Iraq.

“President-elect Obama has indicated that he wants to bring the troops home and we will work with him on that,” Lee said. “This war should have never been waged and it is good to have a president who has taken that position. We know that it will not happen overnight, but we know that it will get done.”

Lee was chosen last week to lead the 43-member Black Caucus which elects new officers for a two-year election cycle before each new Congress convenes in January.

Lee, 62, represents the cities of Oakland, Berkeley and Castro Valley in Northern California. The district has a plurality of Whites – 35 percent – with Blacks at 26 percent, Latinos 18 percent and Asians 15 percent.

The district is considered to have one of the most liberal constituencies in the country, according to the 2008 edition of “The Almanac of American Politics.” Oakland is predominantly Black while Berkeley is predominantly White, very progressive and well-educated. Castro Valley is 70 percent White with a more moderate population.

Lee was first elected to Congress in 1998 after winning a special election due to the retirement of Ronald Dellums, who is now mayor of Oakland. She has been easily re-elected ever since.

A proponent of creating a cabinet-level Department of Peace, Lee was one of 1,000 American women nominated for the Nobel Peace Prize by an organization called 1,000 Women for the Nobel Peace Prize 2005. In addition to advocating for an end to the war in Iraq, she has also been a leader in the worldwide movement to stop genocide in Darfur, a region in the Sudan in Africa.

Americans for Democratic Action, a liberal lobbying group, has consistently given Lee a 90 percent rating while the NAACP rates her 100. The American Conservative Union has routinely given her a zero rating.

Lee said her election as chair comes at an exciting moment in American history. “It is very humbling and an honor to serve my colleagues,” she said. “With the election of Barack Obama as president, a former member of our caucus, this is a historic moment for us and we have the chance to get things done.”

She said that even though Obama was a member of the CBC, she expected no special favors from him.

“We never anticipated any special regard or special relationship from President-elect Obama,” Lee told the Associated Press. “We are all members of Congress. We have many caucuses in this Congress. All of our caucuses have a specific agenda. He has an agenda and we all have to come together to make sure that there becomes a consensus agenda,” she added.

“I will work to make sure that the CBC will continue to be the ‘conscience of the Congress,'” Lee declared.

Other key issues on which Lee expects to work closely with the White House include advocating more aggressively to stop the spread of HIV/AIDS and ending predatory lending.

The foreclosure crisis, she said, “hits women, children and people of color particularly hard” and she will continue to fight “to keep people in their homes.”

“Foreclosures don’t just hurt the family that is being put out of their home, but it affects the whole community,” she said. “The property value of neighborhoods goes down, the way of life goes down and governments cannot collect taxes. If we can stop these unfair foreclosures and work to keep people in their homes and communities solvent, everyone will benefit.”

And Rep. James Clyburn, D-S.C., a CBC member, is the house majority whip, which is third in line to the speaker’s position.

The Congressional Black Caucus claims 43 members with a possible reduction by one if Illinois Democratic Gov. Rod Blagojevich does not select an African American to replace Obama in the U.S. Senate. And a CBC member, Rep. Jesse Jackson Jr., D-Ill., has made no secret of his interest in the job.

University of Louisville political science professor Dr. Dewey Clayton said that given that Obama is in the White House, Lee should do very well.

“I think she will be a chair that makes a difference because she speaks her mind and that is very important,” Clayton said. “Lee is also helped by being in a strong Democratic majority and she will be able to get things done without a lot of trouble. I remember the days when the Republicans were in the majority.

“It was difficult to be chair of the CBC because you were basically a minority inside of a minority. Lee certainly won’t have to deal with that.”

Clayton said that Lee should remember that the CBC of its early days is not the same as it is today.

“The CBC is very diverse, for you have liberals, moderates and some conservatives,” he said. “This is a natural consequence of having more members. And that is a good thing because Black America is not monolithic.”