Malik Rahim, a veteran of the Black Panther Party in New Orleans, for decades an organizer of public housing tenants both there and in San Francisco and a recent Green Party candidate for New Orleans City Council, lives in the Algiers neighborhood, the only part of New Orleans that is not flooded. They have no power, but the water is still good and the phones work. Their neighborhood could be sheltering and feeding at least 40,000 refugees, he says, but they are allowed to help no one. What he describes is nothing less than deliberate genocide against Black and poor people. – Ed. 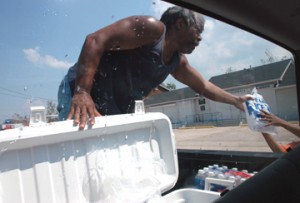 New Orleans, Sept. 1, 2005 – It’s criminal. From what you’re hearing, the people trapped in New Orleans are nothing but looters. We’re told we should be more “neighborly.” But nobody talked about being neighborly until after the people who could afford to leave … left.

If you ain’t got no money in America, you’re on your own. People were told to go to the Superdome, but they have no food, no water there. And before they could get in, people had to stand in line for 4-5 hours in the rain because everybody was being searched one by one at the entrance.

I can understand the chaos that happened after the tsunami, because they had no warning, but here there was plenty of warning. In the three days before the hurricane hit, we knew it was coming and everyone could have been evacuated.

We have Amtrak here that could have carried everybody out of town. There were enough school buses that could have evacuated 20,000 people easily, but they just let them be flooded. My son watched 40 buses go underwater – they just wouldn’t move them, afraid they’d be stolen.

People who could afford to leave were so afraid someone would steal what they own that they just let it all be flooded. They could have let a family without a vehicle borrow their extra car, but instead they left it behind to be destroyed.

There are gangs of white vigilantes near here riding around in pickup trucks, all of them armed, and any young Black they see who they figure doesn’t belong in their community, they shoot him. I tell them, “Stop! You’re going to start a riot.”

When you see all the poor people with no place to go, feeling alone and helpless and angry, I say this is a consequence of HOPE VI. New Orleans took all the HUD money it could get to tear down public housing, and families and neighbors who’d relied on each other for generations were uprooted and torn apart.

Most of the people who are going through this now had already lost touch with the only community they’d ever known. Their community was torn down and they were scattered. They’d already lost their real homes, the only place where they knew everybody, and now the places they’ve been staying are destroyed.

Many people are getting sick and very weak. From the toxic water that people are walking through, little scratches and sores are turning into major wounds.

People whose homes and families were not destroyed went into the city right away with boats to bring the survivors out, but law enforcement told them they weren’t needed. They are willing and able to rescue thousands, but they’re not allowed to.

Every day countless volunteers are trying to help, but they’re turned back. Almost all the rescue that’s been done has been done by volunteers anyway.

My son and his family – his wife and kids, ages 1, 5 and 8 – were flooded out of their home when the levee broke. They had to swim out until they found an abandoned building with two rooms above water level.

There were 21 people in those two rooms for a day and a half. A guy in a boat who just said “I’m going to help regardless” rescued them and took them to Highway I-10 and dropped them there.

They sat on the freeway for about three hours, because someone said they’d be rescued and taken to the Superdome. Finally they just started walking, had to walk six and a half miles.

When they got to the Superdome, my son wasn’t allowed in – I don’t know why – so his wife and kids wouldn’t go in. They kept walking, and they happened to run across a guy with a tow truck that they knew, and he gave them his own personal truck.

When they got here, they had no gas, so I had to punch a hole in my gas tank to give them some gas, and now I’m trapped. I’m getting around by bicycle.

People from Plaquemines Parish were rescued on a ferry and dropped off on a dock near here. All day they were sitting on the dock in the hot sun with no food, no water. Many were in a daze; they’ve lost everything.

They were all sitting there surrounded by armed guards. We asked the guards could we bring them water and food. My mother and all the other church ladies were cooking for them, and we have plenty of good water.

But the guards said, “No. If you don’t have enough water and food for everybody, you can’t give anything.” Finally the people were hauled off on school buses from other parishes.

You know Robert King Wilkerson (the only one of the Angola 3 political prisoners who’s been released). He’s been back in New Orleans working hard, organizing, helping people. Now nobody knows where he is. His house was destroyed. Knowing him, I think he’s out trying to save lives, but I’m worried.

The people who could help are being shipped out. People who want to stay, who have the skills to save lives and rebuild are being forced to go to Houston.

It’s not like New Orleans was caught off guard. This could have been prevented.

There’s military right here in New Orleans, but for three days they weren’t even mobilized. You’d think this was a Third World country.

I’m in the Algiers neighborhood of New Orleans, the only part that isn’t flooded. The water is good. Our parks and schools could easily hold 40,000 people, and they’re not using any of it.

This is criminal. These people are dying for no other reason than the lack of organization.

Everything is needed, but we’re still too disorganized. I’m asking people to go ahead and gather donations and relief supplies but to hold on to them for a few days until we have a way to put them to good use.

I’m challenging my party, the Green Party, to come down here and help us just as soon as things are a little more organized. The Republicans and Democrats didn’t do anything to prevent this or plan for it and don’t seem to care if everyone dies.

Malik’s phone is working. He welcomes calls from old friends and anyone with questions or ideas for saving lives. To reach him, call the Bay View at (415) 671-0789.

Bay View editor Mary Ratcliff’s Nov. 23, 2008, update: This story, typed verbatim when I called Malik two days after Katrina and was amazed his phone was working, was the call heard literally around the world. Within hours of emailing it to our list of activists, who in turn relayed it to their lists, the Bay View began receiving over 300 calls a day from around the U.S. and many other countries. I gave Malik’s number to the hosts of KPFA’s Flashpoints and Pacifica’s Democracy Now, who interviewed him the next day. Malik and friends founded Common Ground a few days later, and soon volunteers flooded in to help. Many kept the Bay View apprised of their progress. What would have been the first volunteers to reach Malik was a group organized by emergency health worker Fulani Sunni-Ali, who drove a truck loaded with other health professionals and supplies from Atlanta but was turned back at a checkpoint shortly before they arrived in Algiers. They were Black, and only whites were allowed through the checkpoints. The heroic story of Malik Rahim is moving up a little higher as the Dec. 6 election for Congress approaches, with Malik as the Green Party candidate facing indicted incumbent Bill Jefferson in a winnable race. Go Malik!