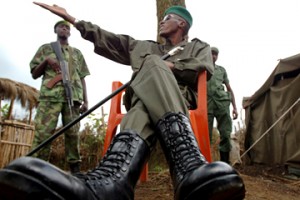 I know no honest, informed Congo watchers who doubt that Gen. Laurent Nkunda and his ruthless militia are tools of the U.S. and its African proxy, Rwanda, in the imperial resource war now raging in Eastern Congo.

U.S. military and national security interests are determined to control Eastern Congo, because its unparalleled mineral riches are even more geostrategically significant than petroleum. They are essential to the manufacture of defense products such as jet engines, missile components, electronic components, iron and steel.

Tantalum and cassiterite, a.k.a. tin, so abundant in Eastern Congo, are also “strategically significant” in that they are essential to the consumer electronics industry that now plays such a major role in the U.S. economy.

To control these resources, Gen. Laurent Nkunda and his militia terrorize the Congolese people of North Kivu Province, which borders Rwanda in Eastern Congo. They shatter and uproot communities and families, with systematic rape, castration, torture, looting and murder.

More Eastern Congolese than anyone is really sure of now face starvation and disease as a result. Many hide in the bush. As more than one relief worker has said, “Chaos broke out and everybody ran off into the bush.”

Or, if not kidnapped to fight in militias or forced into labor and sexual slavery in the militias, they shelter in pathetically inadequate refugee camps.

This is anything but a new story in Congo, especially mineral rich Eastern Congo, where what some call “the African World War” has raged since 1997, with little real peace achieved by the 2006 election of Joseph Kabila. However, the violence and pain now seem to grow worse daily, with more than one report warning that Congo is “on the brink” and that chaos could spread beyond its borders because “when Congo shakes, Africa trembles.”

The fragile ceasefire declared Oct. 28 has long since broken and on Nov. 2, the U.N. reported 1 million people displaced.

U.S., French and British diplomats continue to wrangle and rush from one African capitol to another with little effect and dubious motives, even as Laurent Nkunda threatens to take control of all Congo.

The French want to send troops, but the EU says no. The British want to send troops, but the French say no. The U.N. waffles and then sends more peacekeeping troops, whose mission is no doubt confused by conflicting imperial motives, and none seem guilt free in the international arms trafficking flooding Congo with AK-47s and similar foreign-made assault rifles, not one of which is manufactured in Congo.

Our own lead U.S. diplomat, U.S. Assistant Secretary of State for African Affairs Jendayi Frazer, now seems to stand alone – or alone with Rwanda – in insisting that Rwanda is not in Congo. Naturally enough, given that Paul Kagame, an English-speaking Ugandan who led the Rwandan Patriotic Front (RPF) invasion of Rwanda in 1994 and then became the Rwanda’s president to this day, was in military training in the United States, in Leavenworth, Kansas, when he became commander-in-chief of the RPF.

Jendayi Frazer’s insistence that Rwanda is not in Congo becomes more and more difficult to maintain as Eastern Congolese refugees report that Rwandan Army soldiers are fighting with Nkunda in Congo, that Nkunda is from Rwanda, and that the Rwandan Army is bombing, shelling and shooting at them from across their Rwandan border near Goma, in support of Nkunda. 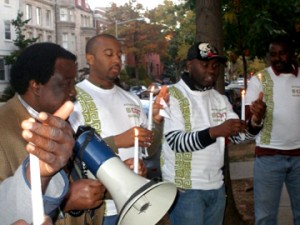 On Oct. 31, Friends of the Congo and the African Faith and Social Justice Network held a protest vigil outside the Rwandan Embassy in Washington D.C., where Congolese civil engineering student Kambale Musavuli took these photographs. 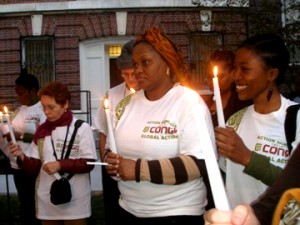 However, Kambale said, they made their point: Nkunda is Rwandan, Rwanda is in Congo and they will not be quiet about it.

Indeed. Does anyone think that the U.S. national security state would arm and offer military training to Ugandan Paul Kagame, now Rwandan President Paul Kagame, for no purpose of its own, out of the goodness of its heart, or for Africa’s sake?

Rwanda is in Congo, waging a proxy war for Congo’s “geostrategic” mineral wealth, in U.S. corporate and military-industrial interests.

Ann Garrison, a San Francisco writer, can be reached at anniegarrison@thepriceofuranium.com.

Acting on the Congo violence

I had the pleasure and honor of speaking with Kambale Musavuli on Oct. 28, when I called Maurice Carney, executive director of Friends of the Congo, to tell him that the San Francisco Bay View National Black Newspaper had posted a video I’d recommended on Congo and planned to post Kambale’s “What the World Owes Congo.”

“I know who you are,” I said, as soon as Kambale answered Maurice’s phone and told me that he was a civil engineering student at North Carolina Agriculture and Technical College. “I just read your piece in Pambazuka and asked another editor to post it to her website.”

Kambale said thanks and then riveted my attention with everything else he had to say about Congo, especially when he told me that he belonged to a tribe whose name is transliterated as Nandé, but that tribal membership is insignificant in Congo and that the Congolese identify nationally, as Congolese. He thus quickly dismissed the usual propaganda about ethnic conflict, rather than Congo’s vast mineral wealth, as cause of the horrific violence reported there.

However, even as Kambale and I spoke, renegade Gen. Laurent Nkunda’s was leading his highly disciplined, well-armed and ruthless militia towards Goma, the capitol city of Congo’s mineral rich North Kivu Province, causing the catastrophic displacement now growing worse hourly.

I had been writing a piece on what Barack Obama might mean to Africa and the Congo, from an American perspective, what former Congresswoman Cynthia McKinney, the U.S. Green Party’s dissident African-American presidential candidate, has meant, and about the terms in which both have addressed the Congo crisis.

However, by Oct. 29, all observers declared Laurent Nkunda and his militia firmly in control of North Kivu, with the help of the Rwandan Army bombing, shelling and firing across the Rwandan border, very near Goma. Nkunda then agreed to a cease fire and demanded talks with President Joseph Kabila.

Not only Eastern Congolese, but also the Congolese Army and U.N. peacekeepers had been fleeing Nkunda’s militia in every direction for several days.

So, I felt compelled to put the piece I was working on aside and write an account of the worsening catastrophe, as well as I could understand it, highlighting the U.S. role as provider of weapons and military training to Rwandan President Paul Kagame and thus to his ally, Laurent Nkunda, in Eastern Congo.

This evening I told Maurice Carney that I’d called the Rwandan Embassy, also in Washington, D.C., and quoted fleeing Congolese refugees saying, “The Rwandans are hitting us so hard that we have to run.” I also told the diplomat who answered how appalled I was, but he wanted to argue about how misinformed I was and kept insisting that Rwanda had not invaded Congo.

I asked Maurice Carney to send me a photograph of a vigil he and allies had organized outside the Rwandan Embassy in Washington, D.C., to go with my essay for the San Francisco Bay View. Maurice thanked me enthusiastically for calling the Rwandan Embassy and urged me to share the embassy numbers and the story with as many people as possible, so here they are:

Your calls will be greatly appreciated. Kambale wrote me this note: “I still don’t know where my grandparents are and I have no idea when this war will stop… You give me so much hope to know that people care and are working for my country to be sovereign and free.”