The special story of a very proud mother 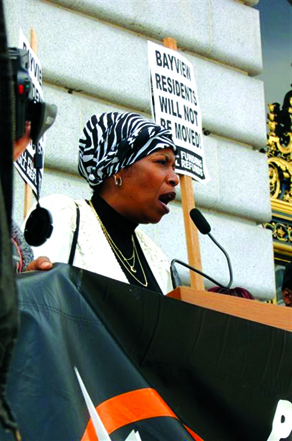 On Thursday, May 31, 2007, my first-born daughter, Jasmine, had the amazing opportunity of having lunch with Barack Obama. During his very first rally in Reno, which was held three blocks from her home, she arrived early to position herself up front. After his speech, he left the podium and entered the crowd to shake hands.

When he got to her, she leaned into his ear and stated, “You must remove Satan’s children out the White House.” Taken aback by her statement, Obama advised her to wait a moment. He then requested the Secret Service to “wand her” for obvious security reasons. She passed.

Obama then asked her what she was doing around 1 p.m. She replied, “Nothing.” He graciously asked that she join him for lunch. Of course, honored, Jasmine agreed.

As her mom, I knew this was an epic day for her and asked what it was like to have lunch with the governor, the senators and all the other high ranking officials of Nevada. She replied, “What, Mom? It was just me and him and about 25 or 30 Secret Service men.” I thought, “Damn.”

She sang high praise of him, his aura and his personality – just something “majestic” about him. He asked her if she worked, if so where, what she wanted to see different in the country, what would make life better and easier for her and other people she knew. She was amazed at his concerns for the people and the sincere expression of his concerns.

The next morning, Friday, June 1, 2007, Obama made an appearance at my youngest son Johnathan’s school, Silverado High School in Las Vegas. Johnathan was a senior at Silverado and the executive producer of the Clark County Unified School District’s Student Newsroom weekly broadcast.

Las Vegas has 282 schools with 256,574 students and proudly boasts a high school graduation rate of 97.2 percent. Each classroom in each school has a flat-screen television monitor for the main purpose of the twice-weekly student newsroom broadcast.

After the Obama live broadcast, Johnathan had the blessed privilege of being introduced and shaking hands with Obama and advised, “You had lunch with my oldest sister yesterday.” Obama buckled. “Jasmine?” he asked. Johnathan replied, “Yes.” 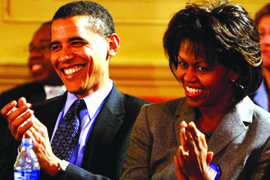 Immediately Obama asked, “Where is your mother? I want to meet her.” Johnathan advised, “She wanted so badly to be here, but she had to work.” Obama went on to express how impressed he was with both Johnathan and Jasmine and looked forward to meeting their mom very soon.

On Saturday, Nov. 1, 2008, at 12:30 p.m., while I was shopping in Wal-Mart, my cell phone rang and I heard the following news. I screamed, danced and gave Jehovah God my Sabbath PRAISE!

This week, my middle son, Michael, who had remained in Las Vegas when I returned to California, received the same blessing as Jasmine and Johnathan.

Saturday, Nov. 1, 2008, Obama’s rally in Henderson, Nevada, was held approximately three blocks from our home in Las Vegas. Michael and a couple of his friends were at Coronado High School Friday night watching all the media broadcast crews preparing for the Saturday morning rally broadcast.

All of a sudden, three black Chevy SUVs rolled in. Michael said, “Mom, I KNEW it was Obama.” He said he and his three friends jumped on their skateboards and tore in behind the vehicles. All of a sudden, the second Chevy Suburban stopped! The door swung open, and Obama yelled, “Come on, dudes, get in!”

They were all so excited they just keep giving Obama the “fist bump.” They could not believe where they were; it was surreal. Obama asked that each one of them introduce himself, as they all did. Michael said he was last and only gave his first name. Obama asked “Michael what?” Michael replied Chappelle. Obama came back with “Oh, like Dave Chappell.” Michael advised, “I have an ‘e’ at the end.”

Obama began to ask questions of each of them. When he got to my son, Michael told him, “Man, I can’t believe this. You already met my brother and sister.” Obama said, “Really?” Michael said, “Yeah, my brother Johnathan …” Obama immediately interrupted Michael and said, “Johnathan, tall Johnathan (Johnathan is 6-foot 6, 18 years old, size 17 shoe)? Then your sister is Jasmine!”

Michael said, “Damn, man, how you remember all that? You been all over the world, talked to millions of peeps and you remember them?” Obama told Michael, “Some people leave a lasting impression on you, and the three of you have.”

Obama then asked, “Where is your mother? I need and want to meet her, and how many of you are there?” Michael told him, “Five of us, six with my mom.” Obama’s reply to that was “Three down, three to go. And I WILL meet them also soon.”

Michael then asked Obama, “Man, why you doing this – the first Black president?” Obama responded, “If not now, when? If not me, who? Someone needs to change things here for the people. The call was placed on my life, and I am answering the call.”

As the mother of these five children, I always prided myself on letting them know, when they are in the streets or any place else, they must represent me and each other. Anybody reading this article who really knows me, you know I am a front-line soldier, and you know where I’m from.

I gave my children exactly what my parents gave me, the truth, raising them with the “ride or die” attitude. I really had no idea they were all paying attention to my instructions of love. I am just so overwhelmed with the mere fact three of them have been in the one-on-one presence of Barack Obama. But with and through God, all things are possible. All you have to do is believe.

One more thing I am asking of each person reading this story. Please let us all keep Obama in our prayers hourly. We know what the racial climate is in this country, and this is of God: “For those who have ears and eyes, let them hear and see.” If God be for us, does it matter who is against us? Please, brothers and sisters, let’s keep Obama before the throne in prayer asking for God’s hedge of protection for him and his beautiful family.

La Vaughan Butler-Moore can be reached through the Bay View at editor@sfbayview.com.