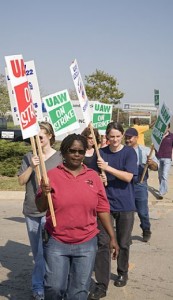 When multiple media outlets put out the same story line, these companies, seemingly separate, establish a media narrative that quickly congeals into an apparent popular opinion – even when such views actually reflect a narrow slice of elite opinion.

We saw this at work in the now infamous run-up to the Iraq War, when almost all corporate news outlets united to cheerlead the war, based on lies.

More recently we’ve seen a profound political distaste for the auto companies, with a special vehemence for the United Auto Workers (UAW), who are portrayed as greedy, lazy “ne’er-do-wells,” who are paid far more than they’re worth.

Rarely are executive compensations questioned, but men and women on the line are repeatedly pointed to, quite unfairly.

This is the psychological fruit of decades of wars on workers, which really comes from the turn of the last century, when law and corporate opinion criminalized unions as “syndicalism.”

Through decades of bitter labor struggles, these laws were overturned, but business never really agreed to the core idea of workers’ rights, and bided its time until a better season.

That season arrived with the election of Ronald Reagan, who, although he ran on the feel-good nationalism of “Morning in America,” waged an old fashioned war against unions by breaking the Air Traffic Controllers – literally putting them in chains to break their strike in 1981.

No matter which party won an election since then, they placated business and hit labor.

One need look no further than the Democrat, William J. Clinton, who fought for NAFTA, which, because it supported businesses when they went offshore in search of cheap labor, severely weakened union power across the board.

Isn’t it ironic that media reflects such an anti-union bent when many corporate reporters – at least newspaper employees – are members of the Newspaper Guild?

But union membership isn’t determinative; company ownership is. And media is often a small part of a much larger corporate conglomerate.

When the UAW was strong, it strengthened the hand of labor almost all across the board.

The UAW fought long and hard for the wages they’ve earned. They shouldn’t be dogged for this.

They are the makers, not the takers.

The media narrative should be “Why aren’t all American workers paid a more decent wage?”

That’s the story that should be the lead on the front page.