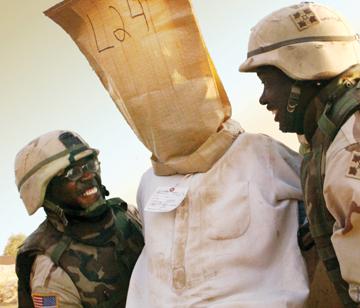 During the Civil War, Black soldiers were allowed to enlist in the Union Army. After the war, most left the army. But some stayed. These soldiers were sent west to fight and kill the Native American Indians who were defending their lands against the government and the white settlers. The Indians called these soldiers “Buffalo Soldiers.” “Buffalo Soldiers”: Oppressed people given guns and sent out to kill other oppressed people. An old and shameful story that some people, somehow, take pride in. Now that story – and that call – is being revived.

Barack Obama is going to the White House – the first Black president – and he’s calling for a new spirit of service to America. Well, I got a question, especially for Black youth: Are you going to sign up to fight America’s wars now? When Bush was talking about staying the course in Iraq till victory is achieved, most of you all weren’t buying it. But now your chests swell with pride when you think of Obama becoming the commander-in-chief of the free world. Some of you all are thinking maybe you would fight for an America that has Obama in charge.

Don’t do it. The nature of these wars hasn’t changed. They still come down to raining death and destruction on people who haven’t done a damn thing to deserve that kind of brutality. Is having a Black commander-in-chief enough to get you to enlist in America’s wars for empire, to kill people, and maybe die yourself, trying to keep America’s stranglehold on the world in effect? Or are you going to stand with people around the world in opposition to these wars? Are you going to buy the poison Obama is selling and think, and act, like an American? Or are you going to start thinking about what humanity needs?

You all aren’t the first generation to face this question. Back in the 1960s, the U.S. sent hundreds of thousands of young men to Vietnam – to kill people and maybe get killed themselves to serve the U.S. empire in trying to drown the Vietnamese people’s liberation struggle in blood. They tried to send me over there, but thanks to the powerful movement of resistance to that war and what I learned from GIs who had gone to Vietnam, I refused to go and kill people in another land. I had more in common with them than with the people who ran this country.

And with all the hell Black people were catching in the U.S., I felt my fight was here. I got sent to Leavenworth Military Penitentiary for this “crime.” Other GIs refused to go out and fight the “enemy” or resisted in other ways. And many who did go came back to the U.S. and got involved in resistance against the crimes of the system. Some of them joined the Black Panther Party and promoted solidarity with the struggle of the Vietnamese people. I became a revolutionary communist back then, and I’ve been on that tip ever since.

Some things are different today. The U.S. is going against a different kind of enemy, Islamic fundamentalists, who don’t represent anything good, and there isn’t a powerful movement in opposition to these wars at the moment. But one thing is the same: These are wars for empire. They’re going to send you to murder people at wedding parties in Afghanistan, terrorize children in their homes in Iraq and run their torture chambers. No one should join up to fight or give support to these wars!

Bombs dropped on villages in Iraq or Afghanistan or Pakistan by U.S. war planes won’t be any less destructive if Obama is the commander-in-chief of the pilot dropping them! Israeli cluster bombs spread in Palestinian villages and refugee camps won’t kill any fewer children if Obama is authorizing the military assistance instead of George Bush! Threats to attack Iran won’t be any less warmongering if they are uttered by Obama instead of Bush!

So again I ask you: Are you going to approach these wars thinking like an American? Are you gonna follow the example of the Buffalo Soldiers? They were Black cavalry units formed in 1866, made up of former slaves who had fought in the Union army in the Civil War. They were sent off to fight in the murderous and genocidal “Indian wars,” driving the native inhabitants off their lands to make way for the expansion of America “from sea to shining sea.” And while the Buffalo Soldiers were fighting the native inhabitants for America, Black people in the southeastern U.S. were catching hell from the KKK and mob violence.

Some people think the legacy of the Buffalo Soldiers is something to be proud of. Colin Powell kept a Buffalo Soldier statue on his desk when he was a top official during both of the Bush presidencies. Colin Powell, who tried to cover up the My Lai massacre during the Vietnam war, who was a major architect of the first Gulf War and who went to the U.N. and lied through his teeth to justify the invasion of Iraq in 2003, finds the Buffalo Soldiers inspiring. He called them “the wind beneath my wings” and especially cited their “loyalty.” Later they were sent by the U.S. to fight Mexican Revolutionaries like Pancho Villa. This is a shameful legacy, and it’s no wonder that a war criminal like Colin Powell is inspired by it.

If you follow in the footsteps of the Buffalo Soldiers, you will be called on to do just like they did: commit horrible acts against people who have done nothing to you, and you will do it in the service of a system that has carried out terrible crimes, including against the masses of African-American people, and you may end up giving up the only life you have in the service of that foul system.

DON’T DO IT! Don’t sign up for America’s wars under the leadership of “commander in chief” Barack Obama and carry forward the legacy of the Buffalo Soldiers. Instead get with a cause that’s in the interest of humanity and is something worth fighting for – making revolution to wipe imperialism off the face of the earth!

Carl Dix is a long time revolutionary whose writings appear in Revolution newspaper and other publications. He can be reached at carldix@hotmail.com.