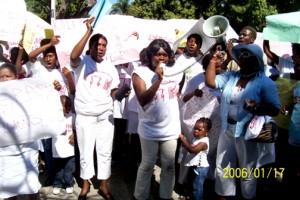 Despite U.S. intervention to block life-saving loans to Aristide that were critical to building infrastructure that would avert or mitigate disasters, his government was able to implement an effective civil defense plan that the U.N. and Haiti’s current administration – with all their resources – have failed to provide.

We never read about the massive grassroots resistance to this occupation or about the hundreds of political prisoners still jailed in Haiti’s inhuman prisons. Neither the U.S. nor MINUSTAH, charged with enforcing law and order, has addressed the unjust plight of Haiti’s political prisoners, and the Haitian government headed by President Preval prolongs their detention.

Grassroots activist Ronald Dauphin, a supporter of President Aristide, was arrested by armed paramilitary troops on March 1, 2004 – the day after U.S. officials forced Aristide into exile. Mr. Dauphin has spent five years in jail without having been convicted of any crime. For three years his case has been stuck in legal limbo, with no progress or active investigation.

Dauphin is the last detainee held for the so-called “La Scierie massacre.” No one has ever been convicted in connection with the La Scierie incident. Most defendants have had their charges ordered dismissed by courts. Human rights groups and the U.N. have concluded that the incident never happened as alleged in the courts.

In August 2006, Amnesty International called on Haiti’s government to promptly bring to trial or release all political prisoners, condemning the prolonged detention of Aristide supporters as politically motivated. In October 2006, the National Lawyers Guild urged Haiti’s government to release the remaining political prisoners, with particular emphasis on the defendants held in the La Scierie case.

In July 2008, the Inter-American Court of Human Rights ruled that the state of Haiti had violated the human rights of former Prime Minister Neptune, another defendant in the La Scierie case, by holding him without trial for over two years with no proof he committed a crime. Neptune was provisionally released, as was another defendant in the case, Amanus Maette. Yet Ronald Dauphin remains in prison.

Haiti’s prisons are a nightmare

Prisoners are dying inside the sweltering, overcrowded 3,800-person National Penitentiary (NP) built to house 450. They suffer dehydration and disease from filthy water. Beriberi from starvation rations is epidemic. Cell “blocks” built to hold five or six people are packed with up to 70 and 80 bodies at a time; prisoners take shifts sleeping and standing.

What happened to grassroots activist Gilbert Orivil illustrates these desperate conditions. Orivil was arrested in March 2004 in the poor neighborhood of Bel Air, a traditional stronghold of Aristide support. His family later found him at the NP, according to the Kolektif Fanmi Prizonye Politik (Collective of Families of Political Prisoners). Almost 4 years later, Gilbert, father of two young girls, died in prison of starvation and routine beatings by guards.

Violence against prisoners sometimes escalates to wholesale massacre. In December 2004, an estimated 60 prisoners at the NP were killed when inmates broke out of their cells, congregating in the courtyard to protest their conditions and illegal confinement. Masked police took up positions on the catwalk and opened fire. As many as 15 prisoners were summarily executed; others were later shot in their cells.

In May 2006, during inauguration ceremonies for President-elect Preval, MINUSTAH sharpshooters targeted prisoners at the NP, killing at least 10. The prisoners had rallied inside the compound, holding banners from the rooftop, to show solidarity with the incoming president, condemn the unjust detention of political prisoners and demand the return of Aristide.

Several thousand supporters left the nearby inaugural events and marched to the penitentiary to protest the killings. Survivors held the bodies of dead prisoners over their heads for people to see from the street below.

After Preval took office, grassroots demands and international pressure for the release of high-profile political prisoners slowly began to make headway. In June 2008 charges were dropped against Father Jean-Juste, jailed for a murder that took place in Port-au-Prince while he was in Miami.

The former Prime Minister Neptune, Interior Minister Privert and Deputy Maette along with grassroots Lavalas leaders Annette Auguste, Paul Raymond and Rene Civil have all been freed. But, except for Auguste – acquitted at trial in 2006 – charges still hang over their heads. They could be re-incarcerated at any moment. In the case of Neptune, the Inter-American Court of Human Rights ruled that Haiti violated 11 provisions of the American Convention on Human Rights, ordering all charges dropped and damages paid; the government has yet to comply.

Meanwhile Ronald Dauphin continues to waste away in poor health in prison. His wife brings him food and medicine when she is able. But the cost of food is high, and the price of gas makes even getting to the prison a challenge. Dauphin doesn’t get to see his wife very often. Prisoners are allowed visits every two weeks. That worked when Dauphin’s visiting day was Sunday. Now that the day has been switched to Monday, he rarely gets visits since his wife can’t afford to take off work.

Minimally, Dauphin says he should be offered medical release to have his cancer and hernia treated by specialists. There is a prison dispensary “but conditions in the dispensary are not good,” he said. “Every month since I’ve been here, someone has died in the dispensary.” Dauphin’s co-defendant, Wantales Lormejuste, died in 2007 from untreated tuberculosis contracted inside prison.

As bad as he feels for himself, Dauphin says his wife’s situation is worse. “I can’t tell you how much she feels alone,” he said. “God is with her. It’s like she is in jail. One day this will end. I will keep praying. There is hope that one day I will be free.”

To sign the on-line petition for Dauphin’s release, go to www.petitiononline.com/march04/petition.html.

Source information for this report

“53 Months in a Haitian Prison: No Day in Court for Ronald Dauphin” by Judith Scherr, Counterpunch, September 2008, www.counterpunch.org/scherr09022008.html

The character assassination of Samba Boukman

Hope rising from the ashes

A cry for help from Haiti: ‘They are cutting off limbs needlessly and taking our dignity; the babies need to eat tonight’