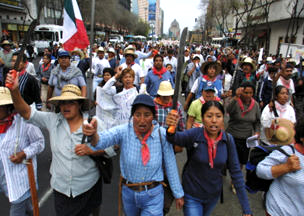 As economies crumble around the globe, states are becoming increasingly repressive, especially against those who are its political opponents and resisters.

This isn’t a regional observation, but a global one.

That tendency is seen in the prosecution and unjust sentencing of men and women from Atenco, Mexico.

The state repression stems from popular resistance to police attacks on flower vendors in May 2006 in Texcoco, Mexico. People supported the flower vendors and not the police, who are among the most corrupt in the world.

But, as ever, repression breeds resistance, for the struggle to support the flower vendors led to pitched battles between the people and the state police. For two days, May 3 and 4, 2006, the two sides battled back and forth, baton and rock, Molotov cocktail and projectile, hand to hand, like the ebb and flow of the sea on the shore. When the state seized several townspeople, people in turn held some of their agents, demanding freedom for their captive comrades. The police then arrested more than 200 people, beating, sexually abusing, raping and, indeed, torturing them. Two young boys were killed.

These struggles took place in the villages of Texcoco and San Salvador Atenco. Atenco has a long history of resistance to the central government, dating from before Mexico’s Revolution of 1910. 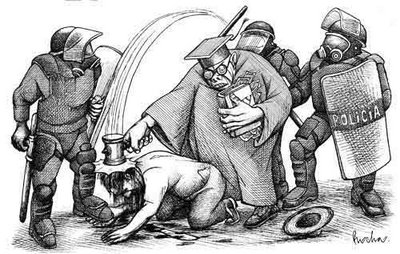 So, among the over 200 men and women arrested, the state keyed on organizers and leaders, and brought out heavy ammunition to destroy them and, through them, the growing popular resistance to government repression and seizures of peasant and indigenous lands.

In 2001, the poor of Atenco organized the Peoples’ Front for Defense of the Land (Frante de Pueblo por Defensa de Terra) and stopped former Mexican President Vincente Fox from grabbing their farmlands. When they prevailed, a movement was born. It was this group which spearheaded the defense of the flower vendors of nearby Texcoco, and it was this group which was targeted by the state.

A year after the May 2006 street battles, three prominent leaders of the Peoples’ Front (FPDT), Ignacio del Valle, Felipe Alverez and Hector Galindo were sentenced to 67 1/2 years in maximum security. Last August, “Nacho” del Valle was hit with an additional 45 years for the Atenco Resistance.

He was not alone in this.

Others – Oscar Hernandez, Alejandro Pilon, Julio Espinosa, Pedro Reyes, Juan Carlos Estrada, Jorge Ordonez, Narciso Arellano, Ines Rodolfo Cuellar and Eduardo Morales – were each sentenced to almost 32 years in prison for their roles in the Atenco Resistance. One of the flower vendors, Patricia Romero, was given four years; she, her father and son are now out on bail.

Members of the Peoples’ Front and other Atenco activists are determined to fight for their people and their freedom. They urge you to support their struggle. You may sign a petition seeking freedom for the Atenco political prisoners by emailing contraimpunidad@gmail.com.

© Copyright 2008 Mumia Abu-Jamal. Read Mumia’s latest book, “We Want Freedom: A Life in the Black Panther Party,” winner of the 2005 People’s Choice Award, available from South End Press or (800) 533-8478. Keep updated by reading Action Alerts at www.mumia.org and www.moveorg.net. To download mp3s of Mumia’s commentaries, visit www.prisonradio.org or www.fsrn.org. For recent interviews with Mumia, visit www.blockreportradio.com. Encourage the media to publish and broadcast Mumia’s commentaries and interviews to inspire progressive movement and help call attention to his case. Send our brotha some love and light at: Mumia Abu-Jamal, AM 8335, SCI-Greene, 175 Progress Dr., Waynesburg PA 15370.