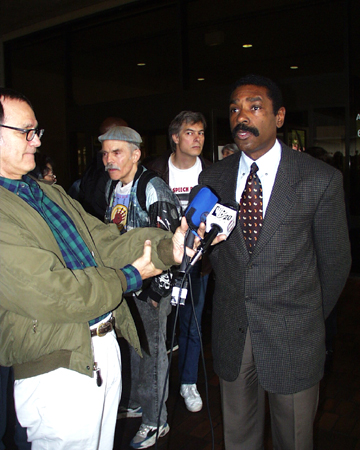 Los Angeles, Dec. 13 – For weeks now, I’ve asked questions of our local Pacifica National Board members, and they’ve given me no answers. Not surprisingly, I’m assuming the worst now: that the threat of bankruptcy is, at bottom, a ruse to shock and awe us into remaking Pacifica into a mainstream radio network. First, the threat: For a $700,000 shortfall, the equivalent of one quarter of one larger station’s annual donations, first you lay off staff – perhaps a wise fiscal move, but it creates a vacuum that your appointees can fill when times get better.

Then you skip over our usual fundraising methods – direct appeals to listeners – and put the KPFK building at risk with a 30-year mortgage for a third or less of its value. Locally, we have less than a week’s notice, or so we’re told. At the same time, two of our PNB members talk openly about, instead, selling the $200 million signal of our most radical and, to some, our most pesky sister station.

Our KPFK Local Station Board refuses to bite the bait, I’m proud to say. The loan is for at least $1 million, $300,000 more than the shortfall. Wrapped into this bailout is a plan for national programming that will inevitably bump local shows and standardize the sound across five very different regions of the country. Have you forgotten the Pacifica Mission’s mandate “to encourage and provide outlets for the creative skills and energies of the community … and to promote and aid other creative activities which will serve the cultural welfare of the community”?

For those local shows that are left, that are still based in the community, 10 of you have put forward a plan that will move to prime time programs that have the most listenership and bring in the most money during fund drives. Diehard listeners will have to hunt in the wee hours for voices like Eiser Mason and riKu Matsuda, Dedon Kamati, Rodrigo Argueta and other wonderful, educational and surprising voices that now grab a fresh radio listener scanning the dial.

It seems now that part of the loan will finance a consulting company to do the job that you were elected to do: generate a recovery and restructuring strategy and a fundraising plan. Apparently, the contractor will serve as interim executive director of the Pacifica Foundation, presumably until they have put their scheme for mainstreaming Pacifica in place. The consulting company turns out to be using Pacifica to test out their generic and formulaic “Extreme Makeover” for non-profit restructuring, before they send their manuscript of that name out to publishers. They have no radio experience, and their resumé wouldn’t make the first cut for executive director under normal circumstances, but they have a friend on the Pacifica National Board.

They are recommending what several of you are also urging: underwriting. However you package it, underwriting is selling air time for promotion. In some ways, underwriting is worse than direct advertising: With an advertiser, you know they’re pushing their product, but when we hear “Uprising has been brought to you by the Ford Foundation,” we can only wonder what influence was bought and sold, and what programs were cancelled or just never made it to the program grid because they had no sponsor. The Pacifica Mission was both wise and prescient when it mandated “that the facilities involved shall be as nearly self-sustaining as possible.”

The sum of what you’re proposing is the Healthy Stations Project, the CPB plan that turned NPR mainstream and will do the same to Pacifica. It was this plan that brought about the Pacifica struggle of the last Democratic presidency, the one that brought down that national board in a torrent of listener outrage and instituted our elected local station boards.

That earlier board operated in secret too, avoiding public scrutiny and public meetings, just as you have squeezed all this in between public meetings and usually in closed sessions. They, too, neither consulted the listeners nor the local station boards, and they whispered among themselves of selling stations.

Tomorrow you might decide to set a course that puts Pacifica on a trajectory for battling Air America and NPR. That’s a war that Pacifica has neither the resources nor the will to win. Pacifica’s troubles come and go. The answer has always been our contributors, our volunteers, refusing to succumb to the glamour of Arbitron ratings and mainstream popularity, and the surprising, thought-provoking and illuminating ideas of community broadcasters. Those are Pacifica’s roots and its niche. If you’ll look there, you can still save Pacifica.

Leslie Radford has served for four years on KPFK’s local board intermittently since 2001, when she entered the Pacifica fray in a failed effort to ensure that Pacifica’s bylaws guaranteed representation by oppressed peoples. She remains committed to finding ways that Pacifica lives up to its promise to be the voice of the voiceless. She can be reached at Leslie@radiojustice.net.

Open letter to the National Board of the Pacifica Foundation

It has recently come to my attention that a crucial and perhaps fatal decision is about to be made by the Pacifica National Board regarding an application for a loan of approximately $1 million, using KPFK real property as collateral. Additionally, I have learned that the Pacifica Foundation is also being forced into facing the possibility of hiring a consulting firm to which executive control of Pacifica would be surrendered or otherwise relinquished.

This message seeks an immediate halt and significant postponement of any PNB decision that might favor the hiring of any consultants, agreements to amortize any loans or the allowance of ANY additional corporate underwriting to Pacifica. Due process and required involvement by listener-members on these issues per the Pacifica bylaws and California law has not been facilitated.

There must be no vote which might allow any of the aforementioned actions to take place. The members of the PNB must stop and prevent this vote from taking place. Kill the vote before it happens, remove it from the agenda. What is apparently happening here is totally unacceptable. The strong likelihood of the outcome of such a move is that Pacifica will be destroyed and completely lost. Forever.

Absolutely stop this, now. Do not allow any such course of action to continue. Any of the proposed actions would constitute, at the least, a significant breach of the spirit and the letter of the Pacifica bylaws. Moreover, any such breach would serve as a Trojan horse to allow raiders or opportunistic actors to easily and completely gut and destroy the organs of the Pacifica Foundation as we know it.

I reject all loan proposals. Pacifica does not need a loan. Pacifica needs transparency and proper communication with and between all its staff, officers and listeners. Pacifica does not need any new debts or creditors or lienholders against ANY of its properties or assets. Period. This is why we have fundraisers more than three times per year. In a national campaign, Pacifica can raise more than $1 million, if needed.

The point here is that all budgetary items must be disclosed and thoroughly transparent. The smell of fraud and egregious deception is hanging thick in the air. Anyone acting to cover up or omit the pertinent facts surrounding these alleged financial crises would be a traitor against the ideals of the Pacifica Foundation and the listenership, which is the rightful, historic and collective owner of Pacifica.

Furthermore, anyone who would actively seek to misinform, mislead, misdirect, coerce or otherwise cause either the listening public or the elected officers and members of the PNB, charged with the responsibility to protect Pacifica, to incur additional debt at the risk of real assets, may be criminally guilty of fraud or malfeasance and should be looked upon with unyielding suspicion. Anyone professing that loans are a solution to Pacifica’s problems must be using tactics of fear and coercion. This has until very recently been kept hidden from public view.

For anyone who has a hidden agenda – or knowledge of a hidden agenda: Time to come clean and expose what is really going on here. Too much is at stake. Not only are the assets of Pacifica at stake. The very personal matter of privacy and personal safety is at stake – for every individual who has ever communicated with any Pacifica Radio station or contributed any programming or financial support to Pacifica or its stations. Anyone can imagine what it means to grant access to the private historic data base of all contributors to Pacifica. This is truly horrifying.

Stop everything! Take the holiday season off. Cancel this meeting or postpone it until after Jan. 15. Inform the listenership about the details of Pacifica’s fiscal health. Open the books. Take it to the air. Let the people know. Stop deceiving us. Eyes are upon you. Do the right thing.

Note to the public

You can also read the dialog here between KPFK LSB members and KPFK’s four PNB directors on the KPFK LSB email list at yahoogroups.com, once you have registered with yahoogroups or have a yahoo email address: http://groups.yahoo.com/group/kpfklsb/messages?o=1.

Here’s the link for the PNB meeting schedule on Pacifica’s website: http://www.pacificafoundation.org/pnb/component/option.com_events/Itemid51.

Here is the link for the list of the PNB board members: http://www.pacificafoundation.org/pnb/content/view/19/47.

The email address for the PNB is pnb@pacifica.org.

Sasha Karlik, a Los Angeles activist and former member of the KPFK Local Station Board, can be reached at skarlik@sonic.net.