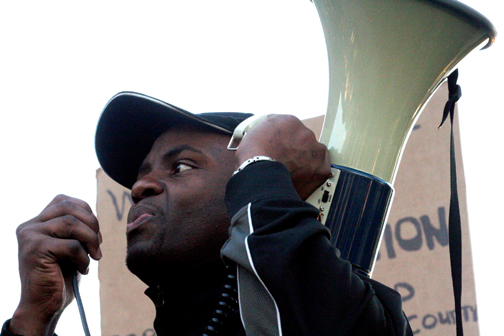 Paris, Texas – Driven by a hurting mother’s call for justice, nearly 300 protesters from across the state and country converged on the lawn of the Lamar County Courthouse to speak out against what they see as a corrupted judicial system aimed at covering up the fatal dragging of 24-year-old Brandon McClelland.

McClelland’s death has drawn stirring parallels to the case of James Byrd Jr., who was brutally killed in Jasper, Texas, 10 years ago after being chained to a truck by three white men and hauled over three miles.

Suspects Shannon Finley and Charles Crostley were indicted by a grand jury Thursday, Dec. 11. They are expected to stand trial in the spring of next year. 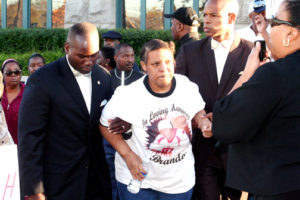 “Based upon the stand that has been taken by the family and others to bring attention to this case, don’t be surprised if the defenders now try to file for a change of venue,” said attorney Daryl Washington. He serves as counsel for the McClelland family.

According to a Texas crime report released in 2007 by the department of public safety, there were a total of 243 hate crimes in the state. Whites made up 44 percent of the hate crime offenders compared to 14 percent for Blacks. Highways, roads, streets and alleys accounted for 22 percent of hate crime locations, second only to residential homes at 40 percent.

“Because the eyes of the nation are on this case, they [defenders] may say their clients now can’t get a fair trial in Paris, Texas,” said attorney Washington. “My job is to make sure this entire process is transparent and that all charges against the suspects are pursued.” 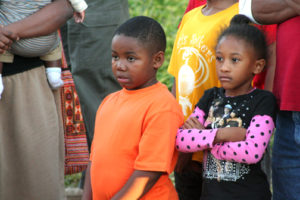 According to an autopsy report signed by 10 medical examiners of the Dallas Southwestern Institute of Forensic Science, the “initial investigation suggested that the blunt force injuries sustained were the result of an accidental hit-and-run. However, additional investigation and developments in the case indicate that the decedent was intentionally run over with a truck.”

The report further states, “Therefore, based upon the autopsy findings and the history available to us, it is our opinion that Brandon Demon McClelland, a 24-year-old black male, died as a result of blunt force injuries.” Also, the manner of death declared by the examiners is homicide.

“I had the opportunity to review the post mortem report on the body and the majority of his (McClelland) brain was absent from the body at the time it was examined,” stated Dr. Joye Carter, a forensic pathology consultant.

Law officials originally declared that McClelland was the victim of a hit and run accident by an unidentified driver when his body was found around 4 a.m. on Sept. 16. Their investigative report was later changed to an accidental hit by Finley and Crostley. Several of McClelland’s body parts were dismembered as a result of his being dragged over 70 feet beneath the undercarriage of the Dodge truck up and down a Lamar county road.

Finley and Crostley are also being charged with tampering with evidence for washing blood off of the pickup truck and also pouring beer onto the body of Mr. McClelland after the dragging. The pickup truck was found hidden behind the home of one of Finley’s relatives. The killing has not been declared a hate crime.

“These injuries are a combination of being run over by a motor vehicle as well as being dragged along the pavement. This is a horrific death and is rightly ruled a homicide. The Dallas County Medical Examiner’s office was courageous enough to rule this case a homicide after it was submitted as an accident,” said Dr. Carter, who is based in Indiana.

The U.S. Department of Justice visited Paris on the same day as the rally and town hall meeting, to meet privately with the mother of the victim and hear views from residents.

“We came here to listen and show our support for the community,” said Justice Department Community Relations Service Regional Director Carmelita Freeman. She could not disclose specifically how her department would help.

“Ms. Freeman told me that they are going to assist us however they can and that the new prosecutor wants to meet with me in person soon,” said grieving mother Jacqueline McClelland.

Lamar County District Attorney Gary Young had come under fire from the McClelland family and supporters for statements made that the killing did not appear to be a hate crime due to friendship ties between the victim and the suspects. The family also wanted him removed from handling the case because he once was the court-appointed defense attorney for Finley.

Five years ago, Finley was charged with murder for the fatal shooting of a friend. That was the same case in which McClelland was charged with perjury for providing a false alibi for Finley’s whereabouts. Both served time in prison.

Recently, Young removed himself from McClelland case, citing his past association with Finley. Former Dallas County Assistant District Attorney Toby Shook has been appointed special prosecutor. Shook is known for trying the “Texas 7,” a group of offenders who escaped from a South Texas maximum security complex in 2000.

“I definitely had deep concerns about Gary Young being on the case,” said attorney Washington. “I hope that with (Toby) Shook on the case, he will make sure justice is done and that everything will be transparent.” 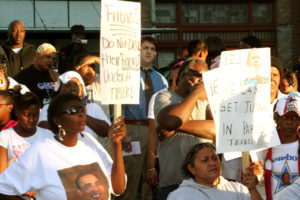 The Nov. 17 rally was led by members of the New Black Panther Party, the Nation of Islam and a lone Paris-based pastor who challenged other local preachers on their decision not to attend the rally.

“Don’t sit up and talk about me in your churches because I am here with groups you don’t like,” said Rev. Fred Stovall III of Kingdom Harvest Church. “The death of Brandon McClelland was the catalyst for this, but there are a lot of issues in Lamar County and Red River County that must be addressed.”

Ms. McClelland said to the chanting crowd: “Like I have said before, this is not just about my son. I just want justice to be done right for my child and for everybody’s child.”

Among the rally onlookers from an adjacent parking lot were several dozen White people, including a Bible waving heckler who attempted to drown out the speakers with words of scripture and disagreement. “This is not a racist town!” he yelled.

“To the white people that are here, don’t get angry with us,” said Hashim Nzinga of the NBPP. “If you do get angry, go home and look at yourself in the mirror. We are here because on some highway in Texas a body of a Black man was found with blood dripping from it. Bones dripping from it.”

Derrick Muhammad of the Nation of Islam in Houston warned prosecutors that “if you want to rewrite some of the history of Paris and Lamar County, handle this case properly.”

Local activist Brenda Cherry, co-founder of Citizens for Racial Equality, and Jim Blackwell of the Tarrant County Local Organizing Committee were among the other speakers. 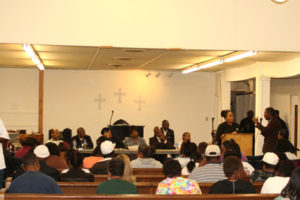 The protest at the county courthouse ended with hundreds jam-packing Rev. Stovall’s nearby church for a community strategy meeting that included a panel of speakers from the rally, dialogue, the gathering of database information and the exposure of other cases from surrounding counties.

Such is the case with Clarksville, Texas, in Red River County, where Rev. Stovall has led a call for the removal of White District Attorney Val Varley for alleged racist profiling by his office and the police department.

Rev. Stovall referenced a case in Red River County where former basketball coach Virgil Richardson, a Black man, is being brought up on drug charges after he and five other Blacks were arrested in 2007 at his home in Clarkesville. “There is not one piece of evidence that links him to drug dealing,” he said.

The case has been likened to the 1999 drug sting in Tulia, Texas, led by a White undercover officer. There were 46 people arrested; 40 were Blacks. During the roundup of the “Tulia 46,” no illegal drugs, drug paraphernalia, illegal weapons or large sums of money were found. By 2004, most of the Tulia 46 had been freed, and a $6,000,000 collective settlement was reached.

Mr. Richardson has since filed a lawsuit against Red River County, Sheriff Terry Reed and the arresting officers in the case. “We were wrongfully imprisoned. It’s time to stand up and do something because this is going on in all the small towns of America,” he said.

“The Richardson family is suffering the same humiliation as the Tulia 46, only this time, no one knows about it,” said Rev. Stovall.

The microphone was opened to the audience to express their hurt over the loss of McClelland, and moderator Krystal Muhammad of the NBPP focused on gathering everyone’s contact information because “one of our biggest failures is that we do not follow up. People always want to help but we don’t find out what they can or want to do.”

“We plan to have everyone return in December and put people to work to build coalitions right here in Paris and the surrounding counties,” said Ms. Muhammad.

Mother: ‘I will not be intimidated’

Holding back tears, the victim’s father, Bobby McCleary, described how he has been receiving threatening phone calls from White people.

“I have been getting a lot of death threats for speaking up but I don’t care because they took away my son,” said McCleary. “He was a good kid and we got to keep fighting. I just long to hear him say the word ‘Pops’ one more time.”

Ms. McClelland has been brought into the DA’s office and questioned as to why she is calling the dragging a hate crime and why she has spoken to media outlets such as the Final Call.

“I told them I spoke to the Final Call because I wanted to get the word out. See, they have been trying to intimidate me but my only baby is gone so I don’t have anything to lose,” she said. “This is a hate crime. Friends wouldn’t do this. I will not be intimidated. This is not over because I want justice.”

“There is much that needs to be done in the area of exposing irregularities in the criminal justice system, here and all across America,” opined Dr. Carter. “This may be the tip of the iceberg for poor investigation of homicide cases in this particular small town, but I have to wonder where else is this is happening that we do not know about.”

“The family is planning to file a couple of law suits. No mother should have to bury her child. Brandon’s death will not be in vain,” said attorney Washington.

Jesse Muhammad is a staff writer for the Final Call newspaper, known for his coverage of the Jena 6 and Hurricane Katrina survivors, and the co-founder and senior editor of For Youth Teens and Young Adults (FYTYA), Houston’s largest youth and college paper. Email him at jesse.muhammad@gmail.com and visit Brother Jesse Blog.