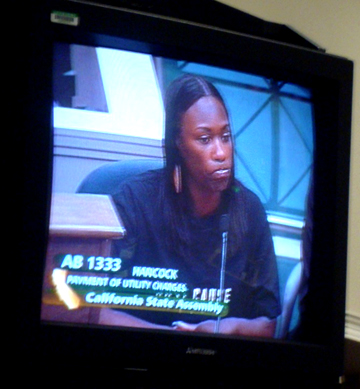 On Dec. 22, Oakland city officials held a press conference to declare utility shut-offs in foreclosed buildings are a significant threat to public health and safety and urged the East Bay Municipal Utility District (EBMUD) and Pacific Gas & Electric (PG&E) to delay shutting off the water and utilities in foreclosed rental properties for 120 days.

According to a press release from Oakland City Attorney John Russo’s office, “The declaration signed by John Russo, City Administrator Dan Lindheim and Oakland Building Official Ray Derania states that the termination of water, heat or electrical service at foreclosed rental properties constitutes a significant threat to public health and safety in Oakland.”

Under California law, utility companies and public utility districts cannot shut off service in a multi-unit building when a city declares that termination would result in a threat to the health and safety of the occupants or the public.

The declaration calls on the utility companies to delay termination of water, gas and electricity at foreclosed rental properties for 120 days from the date of the first shut-off notice to tenants, giving tenants enough time to determine ownership of the property and arrange for continued service. Presently, the wait time is only around two weeks.

Attorney Marc Janowitz of the East Bay Community Law Center says that this declaration is long overdue, and he called upon John Russo to do everything possible to protect renters from dangerous situations.

“We have many, many cases involving evictions at foreclosed rental properties,” said Janowitz, “and this declaration is long past due. The foreclosure crisis has affected many law abiding tenants in the East Bay. The tenants fulfill their legal obligations, but the landlords have been failing to meet their obligations to the banks and lending institutions, causing the properties to get foreclosed upon and the law abiding tenants end up with their utilities turned off, despite being fully caught up on all of their rent payments.”

“The lending institutions, including Deutsche Bank, WaMu and Fannie Mae, have been refusing to accept a minimum of responsibility to the tenants residing in foreclosed rental properties and refuse to pay the utility bills, which results in no heat, hot water or electricity for the tenants, creating very dangerous situations and health or safety problems. All of the banks are involved in this utility shut-off disaster,” said Janowitz.

In Oakland, EBMUD service terminations have soared during the past two years, and the foreclosure crisis is causing major health and safety problems for families still residing in properties where the water and utilities have been shut-off, according to local tenant groups.

During the past year, Just Cause Oakland and ACORN have led on-going campaigns to convince EBMUD to declare a moratorium on utility shut-offs. According to Just Cause, 22 percent of the building foreclosures in Oakland affect residential rental properties.