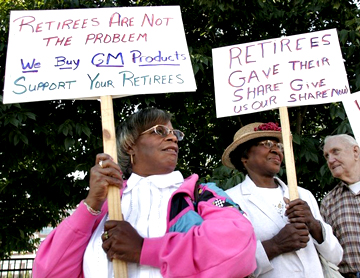 Hundreds of billions of dollars have been poured into financial houses, banks and insurance companies, yet the needle on the nation’s economy has barely budged from “E.”

Now the nation’s Big Three auto companies are at the table in Congress, asking for their share. Not surprisingly, the banks have – despite political claims at the time – tightened, not loosened, credit, a fact that contributes to the once Big Three coming to Congress, for banks have declined to loan money to them!

The auto companies have echoed the banks’ arguments, that they too are “too big to fail,” but they are finding a quite different audience than did the financial bigwigs.

That’s because they occupy vastly different niches in the nation’s political economy, as this new era reflects the transition from manufacturing to financial services as engines of capital production.

While the punditocracy has attacked the automakers for their workers’ pay rates, few have been critical of the fees paid to those at the mid-ranks of the financial services industry – only the executives at the top.

That’s in part because the political class identifies with, and serves, the financial services sector – and quite a few come from that world; think of former senator – and now New Jersey Gov. John Corzine, for example. That’s also because financial services have contributed generally to politicians: Think Enron and the presidential and gubernatorial career of George W. Bush, for example.

And while unions certainly contribute to political campaigns, few have come from the shop floor to the halls of Congress. That explains the disparity of treatment for the two sectors.

The engines of America’s economy are neither Detroit nor Wall Street; they are everyday people, who fuel the economy by their shipping, their use of services and their wealth of daily business transactions.

Detroit is in trouble today, not because they pay their workers too well, but because their place in the domestic market is slipping annually. Until more people willingly purchase their products, their condition can only worsen.

Before the massive, whirlwind bailouts, the Bush administration tried a modest stimulus package for some Americans, to little effect. That stimulus was too modest and too limited.

What if half the money spent on Wall Street went to average Americans? If they’d spent it, it would’ve recharged the economy; if they had put it in banks, it would’ve strengthened bank holdings, making a freeze unlikely.

But the money went to Wall Street, where it sits, as frozen as a Christmas turkey.

The economy moves as a foundation of millions of people. When they can no longer participate, it has nowhere to go, but down.

© Copyright 2008 Mumia Abu-Jamal. Read Mumia’s latest book, “We Want Freedom: A Life in the Black Panther Party,” winner of the 2005 People’s Choice Award, available from South End Press or call (800) 533-8478. Keep updated by reading Action Alerts at www.mumia.org and www.moveorg.net. To download mp3s of Mumia’s commentaries, visit www.prisonradio.org or www.fsrn.org. For recent interviews with Mumia, visit www.blockreportradio.com. Encourage the media to publish and broadcast Mumia’s commentaries and interviews to inspire progressive movement and help call attention to his case. Send our brotha some love and light at: Mumia Abu-Jamal, AM 8335, SCI-Greene, 175 Progress Dr., Waynesburg PA 15370.