Brief filed in prison overcrowding lawsuit advocates the only real solution: Reduce the number of people in prison and cancel new prison construction

San Francisco – As the lawsuit over prison overcrowding comes to a close and the state faces a massive budget shortfall, Californians United for a Responsible Budget (CURB) is proposing the only real solution to the overcrowding crisis: reducing the number of people in prison and canceling new prison construction.

“The state has argued that this crisis can be alleviated by massive prison expansion, but past attempts to build our way out of overcrowding have always failed. CURB opposes the state’s $12 billion prison construction program, AB900, because it simply expands a failed system. It imposes huge human and financial costs with no improvement in public safety,” says Bob Lane of Critical Resistance, one of the CURB member organizations. Even Secretary of Corrections James Tilton admits California’s prisons are already “too big to manage.”

In referring to the state’s current budget crisis, Lane continued, “It speaks sadly of our vision for the future when voter approved projects to improve schools and transportation are threatened by the budget, yet we proceed with building more prisons funded by bonds not approved by the voters.”

CURB’s constituent organizations represent the individuals and communities directly impacted by the state’s public safety policies. “CURB’s proposals give voice to those who have the most direct interest in changing the state’s corrections policy,” says Hamdiya Cooks of the California Coalition for Women Prisoners, another member of the CURB coalition.” People inside prisons have been forced to live under unconstitutional conditions for far too long, and their family members – including young children – have suffered along with them.”

Based on reports from state commissions and experts, CURB recommends a number of specific measures to reduce the prison population: changes to parole and sentencing policy, fully funding drug treatment instead of imprisonment, releasing elderly persons, and providing housing, job assistance and health care to those returning from prison. “These measures will bring significant cost savings, calculated by the experts to be hundreds of millions of dollars per year,” adds Lane.

“The current proposals by the governor and the legislative analyst for early release and changes in parole policy are steps in the right direction,” says Shain. “But they have not been adopted by the Legislature and they do not go far enough. The changes CURB proposes will not only reduce the population but remove the pressures for future overcrowding.” 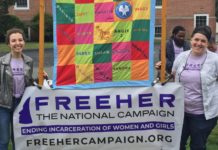