Editorial follows: ‘Gaza massacres must spur us to action’ 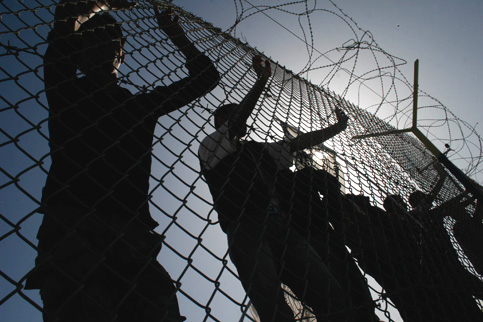 Dec. 27, 2008 – We woke up this morning to the news in Gaza. It seems we always wake up to news there – so it has become a matter of perspective how bad the news is each time, how remote it seems each time, how real or not, how severe and whether the severity warrants an “international outcry” or whether the animals can continue to suffer in their cages for a while longer.

We received a call from my in-laws in Lebanon at an early hour, checking in on my family in Gaza, since they cannot call them directly. We call my parents. My father does not answer. We call his mobile; we reach him. He has just returned from al-Shifa hospital – we hold our breaths.

“We are OK. We went to donate blood and to see if they needed any help,” says my father, a retired surgeon.

“We were in the market when the strikes began. I saw the missiles falling and prayed; the earth shook; the smoke rose; the ambulances screamed,” he said, the sirens audible in the background. He was on Talatini Street at the time of the attacks, just a few streets down from one of the attack sites.

My mother was in the Red Crescent Society clinic near the universities at the time of the initial wave of attacks, where she works part-time as a pediatrician. Behind the clinic was one of the police centers that was leveled.

She said she broke down at first, the sheer proximity of the attacks having shaken her from the inside out. After she got a hold of herself, they took to treating injured victims of the attack, before they transferred them to al-Shifa hospital. There, she said, medical necessities were in short supply: face masks, surgical gloves, gowns etc.

My parents live in the Gaza City center, and the Israeli war planes attacked people and locations all around them. More than 50 “targets” by 60 warplanes, read the headline from the Israeli newspaper Haaretz. And more than 220 killed in broad daylight, in the after-school rush.

Like a movie or a game. If you say it enough times, it does not sound real anymore. Fifty targets, 60 warplanes, 200 people, one day.

“There is a funeral passing every minute. The bodies are piling up.”

Gaza’s air is saturated with the acrid smell of burning human flesh. There is panic, as one would imagine dogs would panic in an overcrowded cell when several of their own are violently, abruptly killed. But dead dogs in a cage, however, would create an outcry. 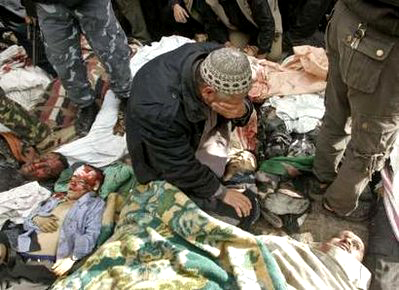 The rains of death continue to fall on Gaza. And silently, we watch. And silently, governments plotted: How shall we make the thunder and clouds rain death onto Gaza? Egypt, the United States, Israel …

And it will all seem, in the end of the day, that they are somehow a response to something. As though the situation were not only acceptable, but normal, stable, in the period prior to whatever this is a response to. As though settlements did not continue to expand; walls did not continue to extend and choke lands and lives; families and friends were not dislocated; life was not paralyzed; people were not exterminated; borders were not sealed and food and light and fuel were in fair supply.

But it is the prisoners’ burden to bear: They broke the conditions of their incarceration. They deviated. But nevertheless, there are concerns for the “humanitarian situation”: As long as they do not starve, everything is OK. Replenish the wheat stocks immediately.

The warden improves the living conditions now and then, in varying degrees of relativity, but the prison doors remain sealed. And so when there are 20 hours of power outages in a row, the prisoners wish that they were only eight; or 10; and dream of the days of four.

Laila El-Haddad’s blog is Raising Yousuf and Noor: Diary of a Palestinian mother, published by The Electronic Intifada.  She is writing from North Carolina.

Gaza massacres must spur us to action

Dec. 27, 2008 – “I will play music and celebrate what the Israeli air force is doing.” Those were the words, spoken on Al Jazeera today by Ofer Shmerling, an Israeli civil defense official in the Sderot area adjacent to Gaza, as images of Israel’s latest massacres were broadcast around the world.

A short time earlier, U.S.-supplied Israeli F-16 warplanes and Apache helicopters dropped over 100 bombs on dozens of locations in the Israeli-occupied Gaza Strip killing at least 195 persons and injuring hundreds more. Many of these locations were police stations located, like police stations the world over, in the middle of civilian areas. The U.S. government was one of the first to offer its support for Israel’s attacks, and others will follow. 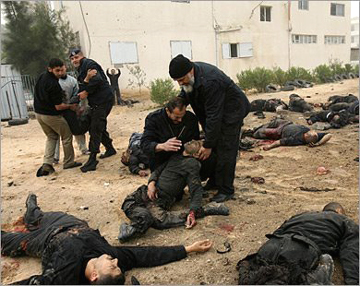 Reports said that many of the dead were Palestinian police officers. Among those Israel labels “terrorists” were more than a dozen traffic police officers undergoing training. An as yet unknown number of civilians were killed and injured; Al Jazeera showed images of several dead children, and the Israeli attacks came at the time thousands of Palestinian children were in the streets on their way home from school.

Shmerling’s joy has been echoed by Israelis and their supporters around the world; their violence is righteous violence. It is “self-defense” against “terrorists” and therefore justified. Israeli bombing – like American and NATO bombing in Iraq and Afghanistan – is bombing for freedom, peace and democracy.

The rationalization for Israel’s massacres, already being faithfully transmitted by the English-language media, is that Israel is acting in “retaliation” for Palestinian rockets fired with increasing intensity ever since the six-month truce expired on Dec. 19. Until today, no Israeli had been killed or injured by these recent rocket attacks.

But today’s horrific attacks mark only a change in Israel’s method of killing Palestinians recently. In recent months they died mostly silent deaths, the elderly and sick especially, deprived of food and necessary medicine by the two-year Israeli blockade, calculated and intended to cause suffering and deprivation to 1.5 million Palestinians, the vast majority refugees and children, caged into the Gaza Strip. In Gaza, Palestinians died silently, for want of basic medications: insulin, cancer treatment, products for dialysis prohibited by Israel from reaching them.

What the media never question is Israel’s idea of a truce. It is very simple. Under an Israeli-style truce, Palestinians have the right to remain silent while Israel starves them, kills them and continues to violently colonize their land. Israel has not only banned food and medicine to sustain Palestinian bodies in Gaza but it is also intent on starving minds: Due to the blockade, there is not even ink, paper and glue to print textbooks for schoolchildren.

As John Ging, the head of operations of the United Nations agency for Palestine refugees (UNRWA), told The Electronic Intifada in November: “There was five months of a ceasefire in the last couple of months, where the people of Gaza did not benefit; they did not have any restoration of a dignified existence. We in fact at the U.N., our supplies were also restricted during the period of the ceasefire, to the point where we were left in a very vulnerable and precarious position and, with a few days of closure, we ran out of food.”

That is an Israeli truce. Any response to Israeli attacks – even peaceful protests against the apartheid wall in Bilin and Nilin in the West Bank – is met with bullets and bombs. There are no rockets launched at Israel from the West Bank, and yet Israel’s attacks, killings, land theft, settler pogroms and kidnappings never ceased for one single day during the truce.

The Palestinian Authority in Ramallah has acceded to all of Israel’s demands, even assembling “security forces” to fight the resistance on Israel’s behalf. None of that has spared a single Palestinian or her property or livelihood from Israel’s relentless violent colonization. It did not save, for instance, the al-Kurd family from seeing their home of 50 years in occupied East Jerusalem demolished on Nov. 9, so the land it sits on could be taken by settlers.

Once again we are watching massacres in Gaza, as we did last March when 110 Palestinians, including dozens of children, were killed by Israel in just a few days. Once again people everywhere feel rage, anger and despair that this outlaw state carries out such crimes with impunity.

But all over the Arab media and internet today the rage being expressed is not directed solely at Israel. Notably, it is directed more sharply than ever at Arab states. The images that stick are of Israel’s foreign minister Tzipi Livni in Cairo on Christmas Day. There she sat smiling with Egyptian President Hosni Mubarak. Then there are the pictures of Livni and Egypt’s foreign minister smiling and slapping their palms together.

The Israeli newspaper Haaretz reported today that last Wednesday the Israeli “cabinet authorized the prime minister, the defense minister and the foreign minister to determine the timing and the method” of Israel’s attacks on Gaza. Everywhere people ask, what did Livni tell the Egyptians and more importantly what did they tell her? Did Israel get a green light to turn Gaza’s streets red once again? Few are ready to give Egypt the benefit of the doubt after it has helped Israel besiege Gaza by keeping the Rafah border crossing closed for more than a year.

On top of the intense anger and sadness so many people feel at Israel’s renewed mass killings in Gaza is a sense of frustration that there seem to be so few ways to channel it into a political response that can change the course of events, end the suffering and bring justice.

But there are ways, and this is a moment to focus on them. Already I have received notices of demonstrations and solidarity actions being planned in cities all over the world. That is important. But what will happen after the demonstrations disperse and the anger dies down? Will we continue to let Palestinians in Gaza die in silence?

Palestinians everywhere are asking for solidarity, real solidarity, in the form of sustained, determined political action. The Gaza-based One Democratic State Group reaffirmed this today as it “called upon all civil society organizations and freedom loving people to act immediately in any possible way to put pressure on their governments to end diplomatic ties with Apartheid Israel and institute sanctions against it.”

The global Boycott, Divestment and Sanctions Movement for Palestine provides the framework for this. Now is the time to channel our raw emotions into a long-term commitment to make sure we do not wake up to “another Gaza” ever again.

Co-founder of The Electronic Intifada, Ali Abunimah is author of “One Country: A Bold Proposal to End the Israeli-Palestinian Impasse” (Metropolitan Books, 2006).