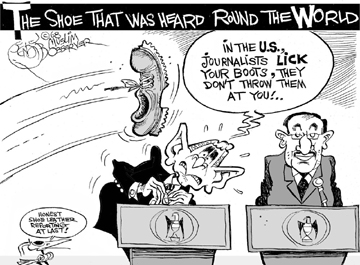 It was only a few seconds – the shoes were flying toward President Bush, and with them a huge insult in Iraqi tradition.

You may have heard the news that an Iraqi journalist threw his shoes at the American president, but as an Iraqi I’d like to share with you a few details about the journalist, and why he did that.

Muntather Al-Zaidi, the journalist mentioned in the reports, is 28 years old. He is from the Southern city of Nasiriyah and lives in Baghdad. He works for the Egyptian-owned Al-Baghdadiya channel, but he is Iraqi.

Muntather is well-known as being against the occupation. Several months ago, he promised his brother that, if he was ever selected to interview President Bush, he would throw his shoes at him as a sign of his outrage and opposition to Bush’s role in the suffering of his people and the destruction of his country. At the time, his brother thought it was nothing more than words spoken in an angry moment.

Muntather’s last reporting assignment, which ran last month, was an investigation of the conditions for Iraqi widows and orphans. As a result of three wars, the rule of a dictator, devastating sanctions and a disastrous occupation, it is estimated that 5 million children are without at least one of their parents and there are 1.5 million widows. As he prepared this report, he was deeply impacted by what he saw, and he can be seen crying in the film that was broadcast in Iraq.

Now let’s have a look on what’s going on in Iraq and how these events are viewed among Iraqis:

At Baghdad University and Al Mustansiriya University, students have refused to study or attend classes. Instead, they are protesting and asking for the release of Muntather by Iraqi security forces.

From all over the world, Iraqis are sending messages thanking Muntather and his family for their son’s message. In TV interviews and with phone calls, Iraqis are expressing their support of his actions.

Many Iraqis inside and outside their country are saying that “for each action there is a reaction.” Bush hurt everyone, they say, and so why is he surprised when he is met with an angry and insulting response on behalf of the people of Iraq?

In Iraq, the traditional community is deeply rooted in tribal relationships. Whether Sunni or Shi’i – and some tribes contain members of both sects – in Iraqi tradition if a member of a tribe takes an action or is in trouble, members of his tribe will represent him and will be responsible for supporting him.

But in Muntather’s case, tribal leaders from throughout Iraq, from the North to South and from East to West, have claimed him as their son. They have said that they want him released safe and sound, offering to pay whatever fine the government will set for him.

Muntather’s action has, for these days, united Sunnis, Shiites and Christians. It united Iraqis as Iraqis. And it only took a few seconds.

Sunni and Shiite tribal leaders have publicly asked that Muntather not be referred to using his tribal affiliation, Muntather al-Zaidi, because they believe his tribal affiliation now encompasses all the tribes of Iraq: They’ve asked for him to be referred to as “Muntather Al-Iraqi” (Muntather the Iraqi). At the same time, the tribal leaders have said that they hope it is now clear that they have only one enemy – the occupation of Iraq.

Tribal leaders from throughout Iraq, from the North to South and from East to West, have claimed him as their son. Muntather’s action has united Sunnis, Shiites and Christians. It’s united Iraqis as Iraqis.

The Iraqi response shows clearly that Muntather’s actions have triggered a deep release in Iraqi society. It gives an indication to the outside world how much so many Iraqis oppose the occupation and the ongoing presence of foreign troops in their country but have been without a voice that cut through the walls of silence and the filtered mainstream media.

It is important to be clear that this action by a single man does not arise from his role as a journalist or from some specific incident or time in his life. It comes from an Iraqi man who, like all of his people, has suffered greatly from occupation, from the actions of mercenaries like those employed by Blackwater Worldwide, from the torture of Iraqis by American soldiers at Abu Ghraib prison and elsewhere, and from the sectarian violence that the occupation has cultivated, fueled and allowed to thrive. Muntather himself was kidnapped a few months ago, though thankfully he was released alive.

Now let’s stop to analyze the situation. Why do so many Iraqis consider Muntather “their son” and why are they calling him a hero? Why are people printing his photo and distributing it in many parts of Iraq as a symbol to promote Iraqi courage and freedom?

His actions expressed the same anger and pain they feel. But his actions gave it a voice, and in that one small action he lit a spark in them that reminds them of their history and their dignity. His symbolic act of protest told the whole story, cutting through the carefully constructed image that has been built by Bush and his supporters since they defied the U.N. and the world to invade and occupy Iraq.

Getting back to responses:

More than 200 Iraqi and Arab lawyers have volunteered to defend him in Iraqi courts, if they are given that opportunity.

One Iraqi businessman signed a blank check and called on Munthather to make it out for any amount, as long as the businessman could receive the shoes that Muthather threw. Another man from Saudi Arabia offered $10 million for the shoes. 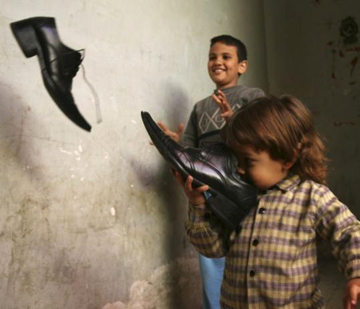 Muntather’s nephew is about 6 years old. He was shown on video carrying another pair of his uncle’s shoes, and he told Al-Baghdadiya channel that he was prepared to throw this second pair of shoes, too, if they wouldn’t release his uncle.

In Egypt, Jordan, Syria, Lebanon and Palestine, there have been strong expressions of support, including protests and celebrations.

In recent days, there have been protests all over Iraq asking for Muntather’s release. Crowds in Najaf threw shoes at occupying forces. The streets of Iraq are filled with anger as people learn that Muntather has been beaten and tortured while in the custody of U.S.-supported Iraqi forces.

Yesterday in Jordan, a good Iraqi friend of mine got into a taxi cab. For Iraqi refugees in Jordan, riding in a cab often means insults, scorn and disdain from Jordanians and Palestinians unhappy to have so many Iraqis seeking refuge in their country. But this time, it was different. The cab driver treated her with respect. Recognizing her Iraqi accent, he said he’d take her anywhere she wanted to go, and he would do it with pleasure, because she was one of the “shoe throwers.”

His case is not just a personal case – it is a national concern. Yesterday parliament had a meeting to help in releasing him. The news yesterday was that within two days he would likely be released, after having paid the fine for his actions under Iraqi law – 200 Iraqi dinars, or, after the catastrophic collapse of the Iraqi economy in recent years, less than 20 U.S. cents.

Today, though, the situation remains tense, and has worsened. The Iraqi government says he will likely have to serve 7-15 years in jail, with no possibility of paying a fine to be released.

But in spite of this news, it does seem as if they will have to release him soon. If they don’t, they risk losing the tenuous control they have in many parts of Iraq. Muntather’s actions could serve as a spark bringing Iraqis to unite to oppose the occupation and the U.S.-supported government. Anyone who knows Iraqi history knows very well what the anger of the tribes can do.

Before the British were thrown out of Iraq in 1920, an agreement on the status of occupying forces in the country had just been signed. Under the pressure of a sustained national uprising opposing foreign occupation, the troops left far sooner than the British occupiers had hoped.

It may well be that the agreement that Bush and Nouri Al-Maliki signed just before the “moment of the shoes” will fail before 2011, following the same course. Many Iraqis today hope so.

Meanwhile, Muntather is still in jail, where he has suffered serious injuries, likely including a broken hand and arm, an injury to his eye and possibly to his legs. Today there were protests in many of Iraq’s governorates demanding his release.

I remember, in the early days of 2003, it was said that invading U.S. troops would be “greeted with flowers.” No one said anything about how Iraqis would say farewell to Bush and his occupation.

Najlaa Al-Nashi is Middle East coordinator and Noah Baker Merrill is an administrator for Direct Aid Iraq, where this story was first published. Direct Aid Iraq (DAI) supports displaced Iraqis through providing funds for crucial medical expenses. It works in partnership with the Electronic Iraq news and analysis website.